In the City of Compton 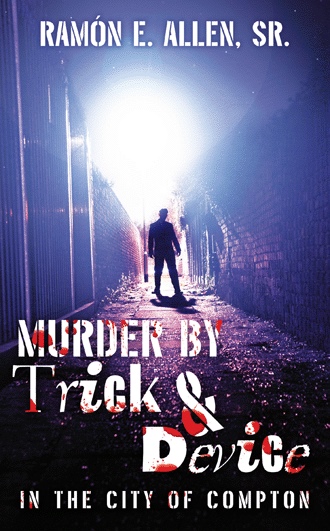 For all practical purposes, it was an ordinary spring evening in the City of Compton, California—warm and humid. The daily off-shore afternoon breeze from the Pacific Ocean several miles away started to diminish, as usual, at around dusk—7:15 p.m. or so. Almost simultaneously, as if a signal was given, streetlights and the headlights of automobiles equipped with automatic sensors came on.

From the 13th Floor of the Compton Court House, the vehicles on the streets below looked like hordes of army ants marching on ancestral trails through the diverse obstacles of their homeland attempting to reach the safety of their respective habitats which have now, thousands of years later, evolved into a gang-infested urban prefecture dominated by Homo sapiens—e.g. man.

As dusk discreetly succeeded daylight, there was an unsettling calmness within the community. In recent past, such calm suggested that a storm was brewing and all hell was about to break loose; not a tempest generated by nature—but rather by a human being. Resultantly, police officers, civil servants and other persons familiar with this specific geographical area likened it to the recurring supernatural or surreal themes portrayed in television or radio productions such as The Twilight Zone, One Step Beyond, The Whistler or The Inner Sanctum. In terms of criminal activity, word on the street suggested that all roads in the United States led to the City of Compton—and this night would not be any different.

The moon rose silently, yet boldly, into the sky and took command of the daily task of providing nocturnal light. And, just as audaciously as when the moon ascended, hundreds of drivers in their automobiles on the Compton City thoroughfares scurried frustratingly into their respective homes—seemingly to survive another night. The streets were quickly and effectively abandoned by the general population as the nighttime populace began to occupy the inner-city communities. The high rollers, players, freaks, strawberries, chicken-heads, and busters always came out at night—a totally different culture that lived in the shadows.

On this particular evening in 1976, the area was not experiencing any noteworthy disturbances with the exception of the occasional sound of nightly bursts of gunfire, barking dogs and the intermittent sirens of paramedic or police units wailing their sirens in the distance. Uncharacteristically, requests for police services were surprisingly lower than normal—a circumstance that allowed the night shift officers an opportunity to catch their breath and continue with the previous night’s unfinished business; or in some instances, an opportunity to concentrate on patrolling problematic neighborhoods that were experiencing greater gang activity and/or street sales of narcotics.

Pepper Alexander was an attractive dark complexioned African-American female resident prostitute and narcotics offender in her late twenties. The fact of the matter is that she had a personal agenda that no one else knew; not the cops or her clients. And, she relentlessly kept it to herself because she was once on top of the entertainment industry in New York City in off-Broadway productions; but she left everything behind, acquired an assumed name, and went underground having witnessed a mob murder. She believed she would have been next so she decided to flee to the west coast.

Pepper worked the general area around the Compton Twilight Motor Inn. As such, she frequented the tavern located just off the lobby of the hotel. All the night employees and regular truck drivers knew her. By not interfering with the legitimate business of the inn or causing a disturbance in the bar, never was she asked to leave. Actually, she brought nighttime business to the establishment in the form of truck drivers wishing to sample her wares and attributes.

On this particular night, Pepper was wearing an outlandish blonde wig while sporting a bright yellow-colored tube-top blouse that clung neatly over her breasts and shrewdly revealed the temperament of her nipples to attract potential customers.

Similarly, she wore a sunflower yellow colored form-fitted stretch pant that defined her well-developed ass and long legs; she stood about 5 feet 9 inches and wore yellow patent leather pumps. Clearly, she was not wearing any panties. Because of the slow action on South Central Avenue that evening, Pepper decided to retire for the night early, walk to the Compton Motor Inn a few blocks away, and have a few drinks in the lounge before going home. It was about 9 p.m.

It is 1976 in the City of Compton and gang-related murders are rising at a significant rate, leaving the police department’s topnotch homicide unit inundated with cases. Determined to find a solution, the department forms a team of highly trained homicide detectives known as The Secret Seven. Darien Ainsworth and Roberta Valenti, two members of this elite team, are about to have their work cut out for them after a brutal murder occurs at

When the homicide detectives arrive on the scene, they quickly surmise that the dead man may have been a victim of a professional hit. As their investigation takes them from Compton to the Pacific Palisades and to the Las Vegas Strip, Ainsworth and Valenti follow a series of mysterious clues that leads them to a multitude of possible suspects. But what they do not know is that local prostitute, Pepper Alexander, witnessed the murder. Unfortunately, she is not interested in talking with anyone, especially the Compton police.

In this whodunit mystery, two homicide detectives must attempt to solve a complex murder case amid 1976 Compton where no one is safe from the cold-blooded killers who lurk in the shadows.

Ramón E. Allen Sr. joined the Compton Police Department in 1969, rising quickly through the ranks to eventually become Chief of Police until the agency’s disbandment in 2000. Now retired, Allen lives with his wife, Wanda, in Los Angeles, California. Murder by Trick & Device is his first book.