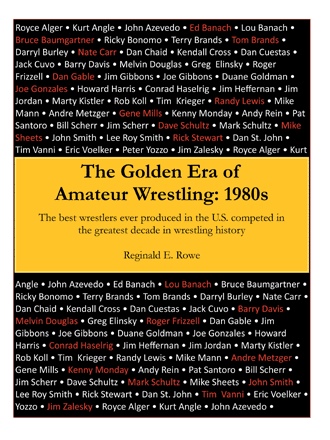 In 1980, the seminal year of The Golden Era of Amateur Wrestling, there were 374 schools in all NCAA divisions with wrestling programs or approximately 10,000 collegiate wrestlers. In 2014, there were just 227 programs with some 6,000 competitors. Since 1972, 670 college wrestling programs (including 95 Division I schools) have been dropped. Forty-eight U.S. states and the District of Columbia had schools drop wrestling. Was it coincidence or karma that 1980 marked the Golden Anniversary of the NCAA Division I Wrestling Tournament and simultaneously launched The Golden Era of Amateur Wrestling? The decade produced a group of U.S. wrestlers unmatched in collegiate and international history. 1980 was the first time the U.S. ever defeated the Soviet Union in the World Cup’s 21-year history at that time. That feat would be repeated by the U.S. squad in 1982. And the U.S. defeated Russia, 19-18, head-to-head in the 1989 World Cup, but lost the title on total points scored in the event. In the field of the 50th NCAA event in 1980, held at Oregon State University in Corvallis, were 11 wrestlers who would become four-time NCAA All-Americans. Of note, two other four-time All-Americans, Gene Mills of Syracuse and Mike DeAnna of Iowa, missed the tournament to train for the 1980 Olympic Games, but completed their four-year sweeps in 1981. The names of the 11 four-time All-Americans who wrestled in the 1980 national tournament are etched in the pantheon of collegiate wrestling excellence: national champions Howard Harris (Heavyweight) of Oregon State University, who earned the Outstanding Wrestler Award; Randy Lewis (134) and Ed Banach (177) of the University of Iowa; and Rick Stewart (158) representing Oklahoma State University. National runners-up Andre Metzger (142) of the University of Oklahoma and Darryl Burley (134) of Lehigh University were joined by fourth-place finishers Roger Frizzell (150) of the University of Oklahoma and Mike Mann (190) of Iowa State University; and fifth-place finishers Geno Savegnago (190) of Eastern Illinois University and Steve Williams (Heavyweight) of the University of Oklahoma. Rounding out the four-timer list was seventh-place finisher Mike Brown (190) of Lehigh University. What a lineup! While the number of future four-time All-Americans wrestling in the 1980 tournament is incredibly impressive, the list of other legendary wrestlers in the field is equally incredible: 118-pound national champion Joe Gonzales and 126-pound winner John Azevedo, both of California State-Bakersfield; 142-pound kingpin Lee Roy Smith of Oklahoma State; 150-pound champion Andy Rein of Wisconsin; and future undefeated national champion (44-0) in 1982, Bruce Baumgartner of Indiana State University. Baumgartner went on to become the most decorated international freestyle wrestler in U.S. history by winning four Olympic medals (two gold); 10 World Games medals (three gold); and four Pan American Games medals (three gold). Gonzales set an NCAA record with a 55-0 ledger his senior year (1980) at Cal State-Bakersfield including two national championships (Div. I and Div. II). He was a five-time national freestyle champion, an Olympian in 1984 and placed third, fourth and fifth in three World Games appearances. He also holds the record for most takedowns in a NCAA season, 448 in 1980. Azevedo went 122-2 in his collegiate career, made the 1980 Olympic team (boycotted by the U.S.) and placed fourth in the World Games in 1982. Without Azevedo and Gonzales in the CSUB wrestling room, future two-time 126-pound national champion Dan Cuestas (1981-82) might have been a four-time champion and future international star Tim Vanni may have captured a title or two. I would have loved to watch the battles that took place in the Roadrunners’ one-mat wrestling room between those outstanding athletes. Rein had a magical 1980 season, winning 40 straight matches. He went on to win four national freestyle titles and qualified for two Olympic teams, winning a silver medal in 1984. Smith, the oldest of the Smith family wrestling dynasty, won a silver medal in the 1983 World Games. He is currently the executive director of the National Wrestling Hall of Fame in Stillwater, OK. Also competing in the 1980 NCAA Wrestling Championship at 150 pounds was a future three-time NCAA national champion, the incomparable Nate Carr of Iowa State, and a future three-time All-American, Colin Kilrain of Lehigh. The head coach of the Iowa Hawkeyes in 1980 was a pretty fair wrestler in his own right. He led the Hawkeyes to a record nine straight NCAA titles (15 in 21 years, including seven in the decade). His name: Dan Gable. The legendary Iowa State wrestler took a 118-0 record into the 1970 NCAA finals but lost a somewhat controversial 13-11 decision to second-seeded University of Washington sophomore Larry Owings. In addition, five wrestlers in the 1980 tournament have been inducted into the National Wrestling Hall of Fame as Distinguished Members: Ed Banach (1993), Bruce Baumgartner (2002), Nate Carr (2003), Joe Gonzales (2015) and Randy Lewis (1998).

Wrestling is a nondiscriminatory sport where size and gender do not matter. It is, without a doubt, the hardest sport in which to compete and boasts the best conditioned athletes in the world. The 1980s produced a group of American wrestlers unmatched in history that included eleven nominees to the NCAA 75th Anniversary Wrestling Team; thirty-three, four-time All-Americans; seven of the top nine wrestlers in history; and five amateur wrestlers who accounted for seven NCAA titles, three Olympic gold medals, six world gold medals, and forty-one United States national championships. In his tribute to the Golden Era of Amateur Wrestling, award-winning sportswriter Reginald Rowe shines a light on the era’s most dominant athletes that include Mean Gene (Mills) the Pinning Machine as he embarked on his quest for Olympic gold that was ended by President Carter and launched an all-out war against an Iranian wrestler. Also profiled is Andre Metzger, the winningest wrestler in history who warned the wrestling world of John DuPont’s insanity; Tim Vanni, also known as Mr. Perseverance; and Rick Stewart who pinned Dave Schultz in the 1981 NCAA finals. Included are poignant remembrances of Schultz by men who wrestled with and against him. The Golden Era of Amateur Wrestling: 1980s shares stories and statistics that pay tribute to the greatest collegiate and international wrestlers ever produced in the United States.

Reginald E. Rowe covered his first high school wrestling match in 1974 as sports editor of The Duncan (OK) Banner daily newspaper and has been a fan of amateur wrestling ever since. He has won multiple awards for sports writing, column writing, editorial writing and public relations programs. He and his wife, Sally, live in Pineville, MO.