A Path to Peace 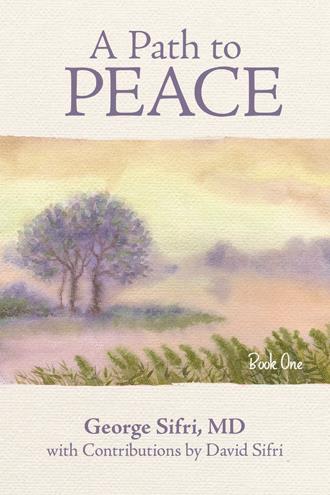 Susan never considered herself to be a spiritual person. She had always found peace in church settings and was moved by hymns and the spirit of Christmas. When asked about her spiritual beliefs, however, she would say she simply couldn’t believe in something she couldn’t see or that couldn’t be proven scientifically.
One year while visiting Seattle, her hometown, Susan spent an afternoon hiking on the lower slopes of Mount Rainier, her favorite place in the world. As a kid playing in the backyard, she would look at that majestic peak rising in the distance and think, Someday, I’m gonna stand on top of that mountain! But as the years passed, and she eventually married and moved out of state, Susan never got around to it.
On that day, though, as she stood in the shadow of historic Paradise Inn, she watched with envy as groups of climbers clumped past her in their mountaineering gear, bound for the 14,411-foot summit. Reflecting on her dream, she turned to her brother and exclaimed, “We have to do this next year! It’s now or never!” Shortly thereafter, they each launched into a yearlong training regimen to prepare for their two-day summit attempt.
When the big day finally arrived, Susan and her brother joined the climbing party outside the lodge where they nervously awaited their guides. After introducing themselves and checking and adjusting their equipment, they were off on their great adventure, but it didn’t take long for them to realize how grueling the climb would be. It was with great relief that they finally reached the 11,500-foot level, where they slept just a few hours, then set out for the summit in the dead of night—before the sun could open crevasses in the softened snow.
“Staggering out of my sleeping bag at midnight on my stiff, aching legs,” Susan said, “I stood there on that dark, quiet mountainside with the other climbers, eerily illuminated by each others’ headlamps, and strapped on my heavy pack. I was so eager to tackle the top of that mountain. After trudging just a few hundred yards up the slope, I attempted to leap over a narrow crevasse in the snow, but my feet never left the ground. My tired legs had turned to jelly! My heart sank as I realized there was no summit in my future. This was as far as I was gonna go.”
As the others continued on toward the summit, Susan wished her brother luck and hunkered down in the snow to wait for their return. At first she was furious with herself. Although she’d trained hard for a year, she had flown in from Ohio just two days earlier and understood now she should have acclimated to the altitude for a few days before trying to climb. When she finally stopped berating herself, she looked around and realized how incredibly quiet it was on that slope. All of a sudden, sitting there by herself in the dark, she became frightened. Here she was on the side of a mountain, at 2:00 a.m., completely alone. “Not a living thing anywhere. Not a sound. Just snow.” She felt as if she were on the moon or another planet. She looked way down to the valley below and saw two tiny lights twinkling at the 5,000-foot level, the lodge where her husband slept. How am I ever going to get down? Susan wondered.
At that moment, she was seized by an absolutely irrational panic. “The kind of panic,” Susan said, “an astronaut might experience on realizing he was stranded in space. I sat shivering in the snow, the stillness disturbed only by the pounding of my heart.”
Gradually reason returned, and she thought to herself, What are you worried about, you doofus? You’ll just walk down in the morning! Finally, after the moment of panic subsided, Susan started to relax.
“My pulse began to slow,” she explained, “and I could feel the warm vapor of my breath inside the hood of my down parka. I gradually became aware of the whisper of a light wind, and I was greatly comforted by the deep blue-black sky. Sitting there on my perch, high above the earth, I felt a calm settle over me unlike any I had ever experienced. I was suddenly at one with the stars, the moon, the mountain, the trees below—the entire universe—and as I retreated into that long, timeless moment, my mind quieted, my heart filled with love, and I knew I wasn’t alone.” 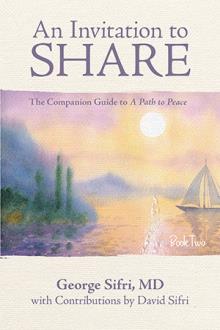 An Invitation to Share
George Sifri MD With David Sifri
$15.99

George Sifri earned medical and law degrees from The Ohio State University and completed an internal medicine residency at Vanderbilt University. During his fourteen years in practice, he found his patients could benefit by discovering and embracing their spiritual truths in a setting of stillness, vulnerability and love. In 2007, he decided to shift his focus entirely to spiritual healing and left his medical practice to write and conduct seminars. He is the author of three books: A Path to Peace, An Invitation to Share, and In Stillness. He lives in Cincinnati with his wife, Raye Ann, and their miniature schnauzer, Ubu. David Sifri earned his bachelor’s and master’s degrees in psychology at the University of Miami and Pepperdine University, respectively. He is currently pursuing a Doctor of Psychology degree at Pepperdine University. Please follow us at: www.georgesifri.com facebook.com/WilburandOpie