Learning of the Way (Daoxue): 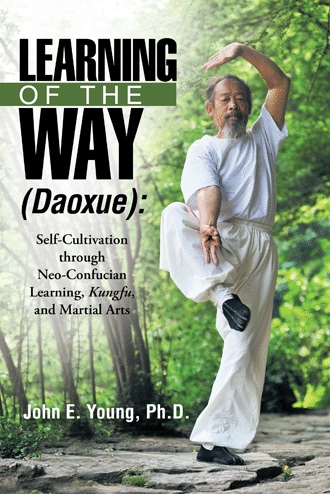 Preface
This book was written in an attempt to understand some of the historic and cultural motivations that encouraged individuals to engage in the practice of traditional wushu (martial arts) in China. Aside from the self-defense considerations for learning and practicing martial arts, historically there appear to have been other, more fundamental and philosophical considerations for studying martial arts, as well as other arts, in traditional China. These motivations are unknown to most Westerners and were unfamiliar to me when I first began studying wushu. In 2009, members of a tai chi discussion group, which was formed in our city, decided to conduct research on several topics related to martial arts, health, and philosophy. At the time, I was aware of the historical importance of Zhu Xi and the topic of Confucian learning. However, I had not specifically researched and written about Confucian learning as it concerns the art and practice of wushu. It was at that time that I began investigating what has amounted to a case study of Neo-Confucian concepts and their application to the specific practice of wushu.
When I began my exploration, I found it puzzling that I was unable to locate many previous in-depth case studies, or research, directly relating Neo-Confucian learning principles to wushu, or to various other traditional Chinese art forms. I was, however, able to locate some articles and small sections of books on these topics. Nonetheless, I had expected to find a large number of previous studies linking Neo-Confucian learning principles to specific art forms. Now, after having conducted this study, I am still somewhat puzzled as to why so few contemporary in-depth analyses on this topic are available. This remains one of my primary questions at the conclusion of my inquiry. I will rely on the expertise of traditional Confucian scholars to enlighten me as to the reason for the scarcity of such research. Perhaps such studies and dissertations exist in the Chinese language.
The approach I used in this book is set forth in the Table of Contents. First, I examine the concept of Confucian learning in general, one of the primary objectives of which is self-cultivation, and explore the major benefits of such self-cultivation. Then I introduce from a historical perspective the era of Neo-Confucianism, which blossomed during the Song (960–1279) and Ming (1368–1644) dynasties. Since Neo-Confucian practice represents the tradition that has had the most significant impact on traditional wushu, I investigate these practices (particularly jing and gewu) in detail. I examine in some depth the approach advocated by the famous Neo-Confucian synthesizer Zhu Xi (1130–1200), because his approach, promoted by the Cheng-Zhu School, became the orthodox perspective in China until the fall of the Qing Dynasty in 1912. The second part of the study applies Confucian and Neo-Confucian concepts introduced in part one, specifically to the art and practice of wushu. Part two examines the traditional aspects of wushu as they were understood and practiced by many Chinese grandmasters.
Finally, the study attempts to touch upon the potential benefits the practice of gongfu (methodical learning over time, which requires effort) can have on modern, twenty-first-century society. The concept of guantong is given special attention, since this level of consciousness, recognized historically by Neo-Confucian practitioners, seems particularly relevant in our twenty-first-century world. Guantong, a state of consciousness that could be achieved after a long practice of gongfu, is described as a “comprehensive understanding” of one’s situational context. It represents a state of “integral consciousness.” This level of consciousness, in which individuals achieve a sense of impartiality, a sort of aperspective worldview, allowed Neo-Confucians to engage in problem-solving and decision-making in a calm, practical, and effective manner. Guantong entails a deep sense of empathy for others. It seems apparent that in our contemporary world, achieving—through sustained effort—a psychological state of empathic impartiality is both urgently needed and more attainable than at any previous time. This research sees the practice of gongfu, in this case through traditional wushu, as one way or method of raising the consciousness of humankind.
A committed practice of gongfu, aimed at revealing and enhancing the humanness or goodness (ren) (jen) within individual practitioners, could benefit the interconnected web of all beings. Gongfu practice, with the intent of augmenting one’s own moral development, need not be limited to any geographic region; nor is it dependent on a religious creed. Raising consciousness, and in turn enhancing our humanity and goodness, benefits all living things. A recognition, awareness, and understanding of the basic levels of individual and group consciousness are imperative if humankind is to meet the challenges of an increasingly complex and rapidly changing world. This book suggests that traditional philosophical concepts, drawn from Chinese culture, can help in meeting these challenges. It is my hope that others will continue conducting research along these lines, as the need for consciousness-raising practices is always an imperative.

Over two thousand years ago, the Chinese sage Confucius proposed that “learning, and putting persistent learning into practice, is a great joy or pleasure.” In Learning of the Way (Daoxue), Dr. John E. Young presents, from a Confucian perspective, the rationale for engaging in traditional Chinese arts and practices.

Dr. Young relies on his experience as a Chinese martial arts expert and professor emeritus to share the results of his comprehensive examination of the concept of Confucian learning that explores self-cultivation, introduces the era of Neo-Confucianism, investigates the practices of jing and gewu, examines the Zhu Xi approach, applies Confucian and Neo-Confucian concepts specifically to the art and practice of wushu, and scrutinizes the traditional aspects of wushu as understood and practiced by Chinese grandmasters. Included is a description of the state of enlightenment that suggests this level of consciousness--guantong--is identical to integral consciousness and is urgently needed in today’s increasingly complex, interconnected environments.

Learning of the Way (Daoxue) is a comprehensive guidebook that examines and teaches Westerners about traditional Chinese arts and practices.

John E. Young, Ph.D. is professor emeritus at the Anderson School of Management at the University of New Mexico, where he taught entrepreneurship and strategic management based on Sun Tzu’s Art of War. He practices and teaches taijiquan, Shaolin, chaquan, tan tui, and external kungfu in Albuquerque, New Mexico.