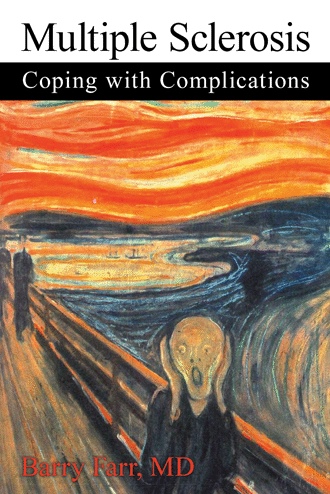 Who Is This Book’s Intended Audience?
It’s primarily meant for MS patients, but those who care for (or care about) MS patients might be interested to read it as well to get a better idea about the "slings and arrows of outrageous fortune" that MS patients have to endure and some practical strategies for coping. Unlike some of the other books written for MS patients, this one’s intended for patients who actually have to suffer through the illness because no panacea is actually yet available.
Physicians might find the observations in this book interesting and helpful – some of which I have published in the medical literature (e.g., using an alternating air cushion to prevent pressure related furuncles in the buttock of a leg being paralyzed by MS) and others I have not (e.g., an experiment of nature that led me to conclude that there may be a better way to prevent aspiration pneumonia than the swallowing exercises often advocated).
Although I’m a man, it’s important to note that most of the observations in this book are not gender specific (i.e., almost all of the strategies should be as useful to women as they are to men). For example, what I do for preventing aspiration pneumonia should work equally well for a woman.
How This Book Came To Be
I NEVER intended to write a book about multiple sclerosis.
But then I never intended to have multiple sclerosis either. Like the way the family cat proudly deposits a dead mouse on your doorstep, life sometimes brings things you don’t expect or want.
After many years of suffering with MS, it occurred to me that perhaps I should share some of the things I had learned about how to cope with the disease (for those coming along behind me who haven’t had as much time to think about it yet).
Here are a few examples of my strategies for coping that I didn't find in other books about MS: 1) what is the best therapy for excruciatingly painful rib fractures for MS patients who can’t tolerate narcotic analgesics (MS patients like me fall a lot and rib fractures are thus a common occurrence); 2) what is the best way to prevent recurrent, painful, pressure-related Staphylococcus aureus furuncles in the buttock of a leg being paralyzed by MS? 3) what is the best way to heal such furuncles when the MS patient can no longer tolerate antibiotic therapy because of gastrointestinal side effects and warm moist compresses don’t seem to have enough oomph to quite get the job done despite eight weeks of application seven times per day? 4) what is the best way to control feculent odor after MS paralyzes the rectal sphincter making it incontinent for flatus? 5) once an MS patient starts choking on her own saliva, what’s the best way to prevent aspiration pneumonia? 6) what is the best way to prevent shearing of the fragile skin on the buttock of a leg being paralyzed by MS? 7) what is the best thing to do after shearing the fragile skin on the buttock of a leg being paralyzed by MS? 8) what is the best way to keep from getting a high fever (and the profound weakness that can go with it --Uhthoff’s phenomenon)? 9) most MS patients know about the hazards of heat, but what are its benefits to MS patients? 10) most books about MS recommend conventional medical wisdom for preventing urinary tract infections (e.g. drinking cranberry juice), but MS patients have a high risk of UTIs despite using those measures; is there an approach that works better? 11) why does a crisis of urinary urgency tend to reach maximal just BEFORE the MS patient reaches the toilet? 12) can an MS patient control such urgency and its embarrassing consequences without taking medications that make constipation worse? 13) why does taking a medication to control urinary urgency tend to be counterproductive if it makes constipation worse? 14) what is the best liquid to use for swallowing pills when getting up at night repeatedly for nocturia (waking at night to urinate) and why? 15) what is the best way to deal with the yucky taste of the methylprednisolone tablets used for treating MS relapses?
How did I manage to figure such things out?
More about this just below, but necessity was an important ally. Necessity is said to be the mother of invention, and it forced me to find an answer when medical science had no data or inadequate data regarding a problem. For example, recurrent, pressure-related, painful furuncles in the buttock of my increasingly paretic leg were DRIVING ME CRAZY. I kept asking my neurologist what could be done to stop them from happening. She kept saying, "we just don't have any data regarding that yet." So, I ended up thinking about this a lot and finally conducted a comparison between two different alternating air cushions from different companies that had a lot of positive testimonials on an independent website (there were not yet studies in the medical literature regarding the products of either company); my study showed that one worked very well and the other not well at all (more about this later).
I received neighborly help from another MS patient immediately after being hospitalized for my first attack of MS where I was given the diagnosis. I now want to return that favor and pay it forward [like in the movie by that name] by giving helpful information to other patients about coping with its complications.

There's no miracle cure for multiple sclerosis. But there are ways to reduce its negative impact. What better source than a physician who battled MS as a patient for 24 years?

Unlike the "cure for MS" books published for decades (none yet deemed valid by the scientific community), this one aims to help patients deal with the reality of chronic complications of MS, sharing new strategies. Why "new" ones? Older strategies didn't work so well. For example, using long-recommended conventional, medical wisdom, MS patients still got more urinary tract infections.

Dr. Barry Farr tells how he avoided urinary tract infection for 20 years despite being high risk. When conventional approaches didn't relieve severe rib fracture pain, he tried something different. The pain disappeared. After 3 aspiration pneumonias during 7 months, he made a change and had none over 7 years. Being new, such strategies won't be found in other books for MS patients.

Dr. Farr received his medical degree from Washington University in St. Louis and a Master of Science degree in epidemiology from the London School of Hygiene and Tropical Medicine. He trained in internal medicine and infectious diseases at the University of Virginia. He spent the rest of his career on the faculty of the University of the University of Virginia School of Medicine where he retired as the William S. Jordan Jr., Professor of Medicine and Epidemiology at the age of 52 due to physical disability from multiple sclerosis. Hospital Epidemiologist at UVA for 18 years and Chairman of the Master of Science Program in Epidemiology for 11 years, he mentored 18 postdoctoral fellows in research. He also was President of the Society for Healthcare Epidemiology of America, and Editor of the SHEA scientific journal Infection Control and Hospital Epidemiology. He co-authored 167 medical publications, 137 scientific abstracts for national scientific meetings, and co-edited two books entitled Catheter Related Infections.