The Life of a Manic-Depressive Rare Book Dealer 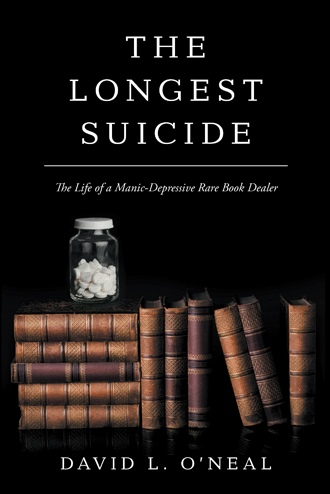 This is about the trials, tribulations, and successes of a bi-polar antiquarian bookseller.

David L. O’Neal looks back at a lifetime filled with adventures, beginning with his childhood, to his time at Princeton University, in the Marine Corps, and his career as a rare book dealer.

Born in Miami in 1938, his family settled in Long Island, New York, where he met his best friend at seven years old. For the next several years, they played war games in the woods, impersonated Robin Hood and his Merry Men, and enjoyed being kids.

But O’Neal had a difficult relationship with his father—a distant man who he blames for his lifelong stutter. For years, he had trouble dealing with authority figures or anyone who was tall, brooding, and foreboding—and he also battled bipolar disorder.

O’Neal went on to become a student at Princeton University, where he enjoyed a prolonged drinking session with Ernest Hemingway in 1959. Then it was on to joining the Marine Corps—mainly because he didn’t know what else to do.

He found his calling as a rare book dealer, helping the FBI catch thieves and making wonderful finds along the way, such as the time he bought a rare printing of the U.S. Constitution for $75 that sold for $75,000.

David L. O’Neal attended Princeton University and served in the U.S. Marine Corps. He is a retired rare book dealer enjoying a second career as a poet, essayist, and short story writer. His work has been published in The Eclectic Muse, Vision Magazine, Mississippi Crow, Two Hawks Quarterly, The Lyric, and in numerous anthologies and other publications. He lives in Walnut Creek, California.