A Journey from New Delhi to Buffalo 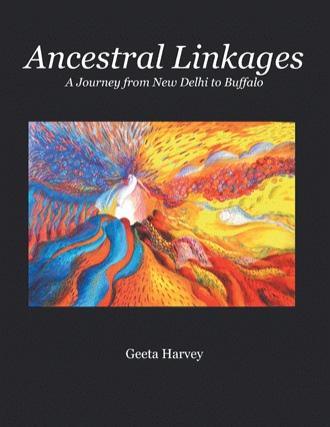 When did the Edifice series conceptualize? Often I have been in the midst of an emerging body of work before I can define its direction and call it a series. In the case of the edifices I can pretty much pinpoint when it occurred. Drawings, that had been germinating in my mind and in my sketchbook for quite some time sprouted and became the Edifice series on 9/11/2001.
A sequence of drawings consisting of figures and architectural structures had been materializing in my studio for over a year. While driving to work one morning I envisioned these structures transformed into abstract architectural forms, fused with figures. The structures were mostly white or light in hue. Later that morning the World Trade Towers in New York City were destroyed in the horrible massacre we all are only too familiar with. I connected the horrific images of enmeshed people and buildings that we saw in the media, with the structuring of the edifices that had been conceptualizing in my mind. The abstract, light hued architectural forms stayed, grew in form and design and the Edifice series took shape.
Two incongruent elements were at work within my life in the early 2000’s while the Edifice series was evolving. Conflicting and demanding circumstances involving my extended family, and the political unrest in the country. They both affected my life in different ways and were a spring board for ideas and imagery.
In my academic world the use of computers was giving a new face to my teaching. I was also gathering up data to have a personal web site made featuring my art work.
The connection of life events with the new mode of representation in my life that included the genre of circuitry, wiring, websites and circuit boards is the essence of the Edifice series. No work was done directly with these elements but instead visualizing the multilateral science behind digitizing and creating electronic data, defined my compositions.
Edifices is the title given to imaginary structures that are a fusion of architecture and the human form. The surfaces of these structures are painted to imply relief figures. The structures themselves are surrounded and interwoven with linear configurations. While the lines represent electronic circuitry of the virtual realm, the imaginary forms of the Edifices symbolize the tangible world. The inorganic nature of lines verses the organic texture of the edifices synthesizes the two tangents of thought on these canvases.
The Edifice itself is akin physically to a circuit board- a repository of information, experiences and a command center. The compression of a multitude of figures on it resonate the human experience. The edifices emanated after a year of exploring the shape and form of the cyber world. The medium of block printing with its linear possibilities was utilized to create diagrammatic and geometric metaphors of the electronic world. During the course of my research I found connections between yantras of Hindu and Buddhist art and my paradigms. A series of circuitry diagrams were explored and created.
Edifices span time, personal experience and space. Painted in acrylics and gold leaf, in some cases they are collaged as well. The gold leaf imparts the idea of indestructibility to the human aspect of Edifices. This human quality of the Edifices remains less transient than the ever evolving Virtual World.
The Sentinel was a form conceived as a three dimensional structure made up of circuitry and figures with the texture of actual sari fabric, paint and gold leaf. Sentinel personifies the energy and circuitry of the human world in the form of a clustering of figures within a contour. The virtual world with its electronic impulses is depicted in a linear pattern that has been block printed and collaged over with fabric. The fabric used in the series is from a sari that had been worn by my mother. A Sentinel is one who keeps guard. I think of my father as the Sentinel of our family.
Amalgam, an edifice in landscape form, is a mélange of figurative renderings and linear iconography. The linear areas representing electronic circuitry are block printed and collaged with sari fabric. The figurative mass is painted. The gold leaf areas speak of the permanent nature of the tangible world which is in contrast to the transitory nature of cyberspace. The figures in expressive form are voices of life itself.
References to the hill stations in India that my family traveled to as children, are often in my psyche. They are just below the surface as I spontaneously draw a jagged form. A memory of a climb or a descent will project itself and manifest as a mountainous form in my work. The pale yellow ocean-like area of the painting carries thoughts of the Mediterranean Sea. My father’s plane, with its engine on fire, plunged into the Mediterranean while he was returning from America to his family in India in 1953. He had gone for a year of study and research to Chicago. He was one of a very few who survived.
The past episodes of hill stations and the sea amalgamate into the figurative reliefs, the circuitry and the background space of this painting.
The creation of Downtown spans a period of time in 2004 that was spent looking out of the window while my husband was recovering from surgery in Roswell Park Memorial Hospital. I saw images of downtown Buffalo at various times of the day and night as many different conditions prevailed outside and within the room. The view of downtown was striking and the buildings inspired me to sketch as I sat in the room day after day.
My drawings of buildings as I saw them were gradually altered, rearranged and repeated, in quest of a composition that was satisfactory. Drawings of buildings developed into circuit board like renderings. Downtown buildings matured into a collective form.

Artist Geeta Harvey leads you on a journey that spans two continents, highlights her emotions and experiences and presents its own unique symbolic language.
In her birthplace of India, she absorbed the sensual and intellectual world surrounding her. Moving to the United States added American traditions to her sensibilities and it was in Buffalo, New York that she synthesized the past and the present to create the imagery that makes up this book.
Beginning with figurative paintings she goes on to reveal imaginary landscapes with themes of isolation, separation, war, love and other conflicts. The figurative iconography gives way to abstraction and the world turns inanimate. She confronts the advent of computer technology with virtual icons - imaginary gods of cyberspace - and edifices that integrate humans with the electronic world. Reconstructed saris, landscapes and sumi ink paintings move the journey forward.
No matter what the theme, medium or idea, the images in Ancestral Linkages are unprecedented works with roots in Eastern traditions and the Western culture.

Geeta Harvey, a native of India, immigrated to the United States in 1966. She received her bachelor’s and master’s degree in art education from the State University College at Buffalo. She has been a practicing artist and a teacher of art at the school and college level for thirty years. She has had numerous group and solo exhibits and is a recipient of several awards. Her works are in public and private collections in Japan, India, and the United States.