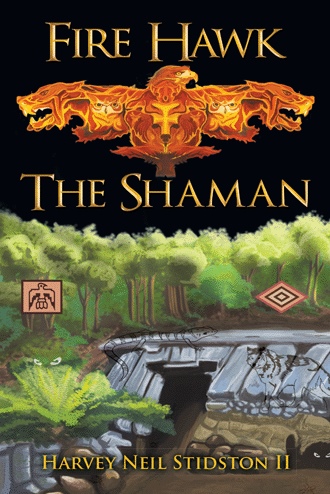 A young man ran through the forest as fast as he could. He tripped, fell, got up, and ran some more. The small limbs of the trees whipped his face and arms, leaving welts and small cuts as he ran past them faster and faster. He looked back only to see the blood red eyes of the Indian Devil coming after him. He could feel the pure evil wanting to consume him. The Shaman told him, “As my Apprentice, one day the Indian Devils will try to control or destroy you. If you remember what we taught you, you will survive.”

He remembers back to when he was a small boy being so sick he was at death door more dead than alive.  His Shaman was there through it all, burning the smudge and chanting using his spiritual powers to heal the boy pulling him back at the last second.  After being pulled back his legs were hard to move and he couldn’t breathe so well. Soon the Shaman healed his body.  Then he gave Fire Hawk his name and a new lease on life.  Fire Hawk had an old man’s spirit and wanted to become a Shaman.  First he must go to the Shakawl the Shaman Council to ask if he could become a Shaman Apprentice.  He meets his friends Bobcat, Bright Moon, and Sprocket at the Shakawl.

Thunder Cloud was the Shaman who taught “White Owl” Fire Hawk’s Shaman.  Fire Hawk had been prophesized over 100 years ago.  This boy would nearly die and come to the Shakawl having more power than a full Shaman.  Having to pass a sacred test to showing he would give his own life to protect the world proving he was worthy of being an Apprentice.  Only then could he become a Shaman Apprentice and be trusted to learn the Shakawl’s secrets.

Fire Hawk would be sent to observe the past to see how the Indian Devils that tried to steal the power of the Shakawl.  He knew that he couldn’t change anything, because it would change the future and this is not the Shaman way.

Soon the sky got dark and the wind came up.  Lightning rang through the sky and danced on the clouds.  The Lieutenant’s and Dark Claw’s eyes turned blood red as if to turn over their souls over to the Devil himself.  Dark Claw’s skin turned White as if he were dead.  Thunder Cloud came out in all his grace, wearing a war chief’s apparel of a white wolf headdress and chest plate.  As he raised his staff then; lightning stuck his staff and was repelled, striking Dark Claw.  Both Dark Claw and Thunder Cloud seemed to grow into giants as the lightning flashed and their shadows appeared on the side of the hill.  The lightning flashed again making Thunder Clouds face look as if it were painted like a skull.  The bullets seemed to bend around Thunder Cloud the only thing that came close was the fire balls and Lightening thrown at him.  The sound was deafening and frightening all at once.  The ground shook like an earthquake.  There where screams and sounds no man should ever hear.  The fighting went on for what seemed like days. The lightning bolts were thrown back and forth. The cannon balls had ripped through the canyon hitting and exploding everything in its path.  This was not the fight that Thunder Cloud wanted but, he fought with honor.   On both sides men were thrown around like rag dolls.  At times the sky was light as day with the lightning and fire crashing through the sky.  How was all this to end.  Thunder Cloud through more and more lightning bolts, Dark Claw through more and more Fire Balls.  Fire Hawk was watching and only the Lieutenant, Dark Claw, and Thunder Cloud seemed to have powers. The fight looked as if it were in another place.  The soldiers kept fighting and never seemed to see any of the lightning bolts or fire balls.  Soon it got totally silent and I mean there was no sound at all but the ringing in their ears.  Both side were removing their wounded but did not let any opportunity pass to get at the other side.  There was a Colonel there but he didn’t see what had happened.  The Lieutenant and Dark Claw fought a different battle then he encountered. The facts were bent around him and he saw only what the Lieutenant and Dark Claw wanted him to see.

The morning came and many were gone. There was a smell like gun powder and burnt dog hair only worse.  The smoke started clearing like it was being sucked away.  Soon Thunder Cloud came and told him it was over for now as he fell to his knees.  His hair had streaked and turned white and his skin had turned old overnight, like the life had been drained right from his body.  After all of that Fire Hawk could only hear the ringing in his ears.

“Who won and who is the Lieutenant?” Fire Hawk asked. He could barely hear his own voice.

“No one ever wins in war.  People lose their hearts in war.  But, I knew that you would be able to see the Indian Devil for what he is.  Did you see the pure evil coming from the Lieutenant?  Soon it will be time for you to go,” Thunder Cloud said.

There are many Indian Devils that live among us few of them have a purely Evil Heart!  They want to steal the powers of the Shakawl doing anything to take another’s powers, even kill for it.

Come fly with Fire Hawk the Shaman and see how White Owl, Running Bear, and his friends teach the Spirits how to find the Red Road, the Happy Hunting Grounds, and finally able to forgive themselves.

(Illustrations by Jamison Chambers and cover design by Sammy Gonzales)

As a young man runs through the forest, he looks back to see the blood red eyes of the Indian Devil coming after him. A few moments later, he passes through a portal and is sent into the past—the first step of his Awakening.

As the young man reflects on a childhood filled with more illness than good times, he remembers the Shaman, an Indian medicine man, who eventually healed him and named him Fire Hawk. After Fire Hawk decides he too wants to become a Shaman, he must ask the Shaman Council, Shakawl, for approval before he can become an Apprentice, and then pass a sacred test to demonstrate he is worthy of learning the Shakawl’s secrets. Unfortunately there are many Indian Devils who will do anything to steal powers—including kill. As his destiny to become the most powerful Shaman in the world rises up to meet him, the young man must follow his Heart and rely on help from his friends to evade the one who tirelessly hunts him before he can realize his purpose and learn forgiveness.

In this engaging tale, a young man facing significant challenges embarks on a spiritual journey to greatness where he discovers that his most important power in life is believing in himself.

Harvey Neil Stidston II his teacher’s first discovered he had dyslexia when he was in second grade. Because there was little help at the time for his learning disability, Harvey barely graduated from high school. He and his wife, Anita, have four children and live in Clovis, California. Fire Hawk: The Shaman is his first book.