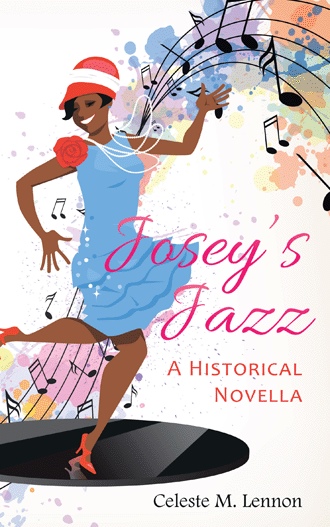 C H A P T ER TWO
The Getaway
No matter how many times Grandma Tish told me to take my frolicking self to school, I always found myself standing outside the grocer, listening to one
of Deek’s wild stories.

I went to school like I was supposed to, but every now and then, I would tell Mrs. Brown I wasn’t feeling well or say that Grandma Tish needed me home early, so she would excuse me from my lessons. I always waited around to talk to Mrs. Brown when nosy Nora was preoccupied. I knew she would jump at the chance to tattle on me, again. As I strolled along, I would create songs and rhythms in my head. People would see me snapping my fingers, twirling around, and rat-tat-tatting all the way down the road. My imagination took me to a fancy place, with lots of lights and me all dolled up, a-singing away.

If Mrs. Brown suspected anything, she never mentioned it to me or my grandmother. When I wasn’t entranced by one of his tales, I was looking over my shoulder to make sure Grandma Tish didn’t come and snatch me out from the crowd.

“So what’s it like, Deek?” a young lad asked.
“The joints there are fantastic. You can find a jumping, jiving speakeasy on every corner. There’s Jungle Alley on 133rd Street, where all the nightclubs are. Y’all are a little too young to hang out in places like that. Too young to even hear about them,” Deek teased.
“Ah, man. Come on, Deek, tell us more,” a young boy name Rudolph stood there, pleading with Deek to continue.

Deek was right about Rudolph being too young to hear about clubs and speakeasies. He didn’t look over twelve years old. I assumed no matter what the age, people admired Deek and loved hearing about his adventures in the city.

“They are the bee’s knees,” Deek said as the younger boys standing around started laughing.
“The bee’s knees,” another boy repeated. The children loved when Deek spoke city slang.
“I always have a swell time,” Deek said. “And there’s never a warm Sunday that goes by without a parade going on. Everyone in Harlem take to the streets to watch regalia on proud marchers, dignitaries with their honored insignia and thriving organizations.”
“I love parades,” one of the boys said.
“The parades here are no match for the ones in the city. You blink your eye down here, and the parade is over. There are so many people in the parades of Harlem; there are so many wonderful things to do and people to see. You get a chance to hear brass bands play and watch organizations share their missions,” Deek said.
“Tell us more, Deek,” Rudolph said.
“At any given time, you can find vendors on the streets, selling all kinds of things like yams, roasted nuts, and even pig’s feet.”
“Pig’s feet?” a boy repeated, coughing.
“I love pig’s feet,” Rudolph said.
“Once upon a time, that was all we had to eat.
Our people ate the parts of animals no one else wanted. That’s how we survived,” Deek said.
“Boy, would I love to journey to the city,” Rudolph said. “Everyone should have a taste of the city life,”
Deek commented. “If only for one night.”

When I heard that last remark, it confirmed the conversation I had with Martha. I wanted to experience the city life. I wanted to be able to tell everyone stories about the magnificent things I saw.

It wasn’t easy planning to get away. I was so nervous that Grandma Tish would find out I was up to something and question me about the whole thing. If she had any idea I was planning to go to Harlem, she would lock me up and throw away the key. I stayed out of her way for a solid two weeks in fear that my plans would slip out or I would do something clumsy to cause suspicion.

I knew Grandma Tish would be furious with my decision, so I didn’t even say good-bye. The day I left, I placed a letter in a neatly folded envelope on the kitchen table.

I emptied the piggy bank Daddy had given me for my seventh birthday. I remember the way he chuckled whenever he gave me money to put in it. That same money I had been saving for years, I would now carry with me.

I caught a train, and on the ride I played the words I wrote to Grandma Tish over and over in my head:

Dear Mama,
I know what you’re going to think when you find this letter. I know we have had many talks of your disapproval of my hope to move to the city. I hope you will find it in your heart to forgive me. With much thought, I am headed to Harlem, New York, to make my dreams come true. Please do not worry about me. Martha is already there, expecting my arrival. We will room together, and I know that I will land a singing gig as soon as I get there. As soon as I make some money, I would like for you to come for a visit. I love you, Mama.
Love,
Josephine

I envisioned how Grandma Tish would feel when she walked into the house; she would know something was different. I imagined her expression when she arrived home from a meeting with women who advocated for women’s rights and realized that her sweet Josephine was gone. I was hoping that she wouldn’t cry after she read my letter. What if I was killing her? I thought. What if she became sick because I just up and left? I felt awful and couldn’t help but worry.

I had a right to live my own life. I was unhappy at home and just wanted to experience something different.

It is 1927 and Josey is an African American teenager living in the rural Deep South. Unfortunately Josey is unhappy, unsatisfied, and desperate to make her life whole. Finally with encouragement from her friends Deek and Martha, Josey decides she is deserving of happiness, ignores her grandmother’s wishes for her to become a teacher, and embarks on a journey to the North where she hopes to fulfill her dream of becoming a singer.

After Josey hops a train and arrives in Harlem, she meets up with Martha and Deek who help her find a place to live and introduce her to the Harlem nightlife. But in the midst of Prohibition and rampant racism, Josey soon realizes that her dream may be more difficult to attain than she imagined. It is only after she sneaks into an underground club and takes the stage that everything begins to transform for Josey.

Josey’s Jazz shares the tale of an African American teenager who sets out on a quest to follow her heart and pursue her dream of becoming a jazz singer in 1920s Harlem.

Celeste M. Lennon is from a rural town in North Carolina. She has spent over fifteen years in the education field. She enjoys working with youth in schools and churches. In her spare time, she enjoys writing about issues of everyday life. She is the mother of one daughter named Nyla. Celeste would like for you to like the Celeste M. Lennon Facebook page for new releases and giveaways. Feel free to share your thoughts with her on the following sites:
Twitter: @CelestialAuthor
Instagram: celeste_m_lennon_books
Wix: celestelennon.wix.com/celeste
Facebook: Celeste M. Lennon