German Leader after Bismarck and before Hitler 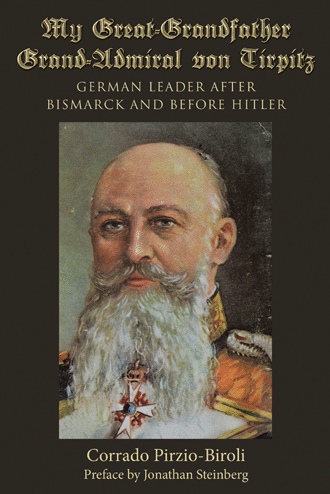 The title of the book sums up an aspect of this unusual work: its character as family history. Corrado Pirzio-Biroli offers a robust defense of the life and career of Gross-Admiral Alfred von Tirpitz (1849-1930), as family man, and builder and soul of the German High Seas Fleet. The book rests in part on private reminiscences of Corrado’s grandmother and Tirpitz’s daughter Ilse and of her brother Wolff - who went down with his ship, the Mainz, miraculously survived, became a POW and reported on his four meetings with Churchill.

Tirpitz served as Secretary of the Navy under Kaiser Wilhelm II and four chancellors and remained a man of influence after the end of that Empire. Although faithful to the Prussian monarchy, he was a liberal at heart, respected parliamentary democracy and criticized the Kaiser. His positioning before the Reichstag was compared to that of Pericles in Athens' Agora: 'In words it was a democracy, but in reality it was the mastery of the first man'. His “N” (Nachrichtehburo) was possibly the first modern propaganda ministry, helping transform German navalism into a mass movement.

Tirpitz’s story is intertwined with the insane fight for supremacy among the World’s Great Powers. The book deals with all aspects - political, economic, diplomatic as well as the psychological - of the March of Folly leading to WWI.

Tirpitz worried about Britain’s monopoly of the sea lanes, the preemptive–strike history of the Royal Navy and the risk of a hunger blockade of Germany. For these reasons he elaborated the Risk theory and the Tirpitz Plan for a credible, defensive naval force. Churchill thought that, had his strategy had been applied, this could have changed the course of the whole war

After the war, Tirpitz entered politics, but turned down popular calls to assume dictatorial powers, persuading instead Hindenburg to stand for the presidency, and agonized about Hitler’s rising power.

Corrado Pirzio-Biroli offers a robust defense of the life and career of his great-grandfather, Grand-Admiral Alfred von Tirpitz, in this engaging family history.

As the creator of the modern German navy, the trusted adviser of Wilhelm II for two decades, and an “eminence grise” during the Weimar Republic, Tirpitz was a central figure in European politics for several decades.

While Tirpitz agonized about Hitler’s rising power, he could not prevent it, and he felt as though he was too old to assume dictatorial powers. If he had done so, he would have liked to have upheld the Reichstag, which he had always shown respect and counted on.

Drawing on personal recollections, unpublished family papers, and thoughtful analysis, the text reveals how Tirpitz had to adapt to a rapidly changing world in which his country went from being a juggernaut that traditional powers tried to rein in to a pariah nation.

Trace four generations of one of Europe’s most interesting families, and discover how Tirpitz proved to be a visionary leader in this account of one of history’s most misunderstood and important figures.

Corrado Pirzio-Biroli is Grand-Admiral Alfred von Tirpitz’s first great-grandson. He spent thirty-five years as an official with the European Commission in Brussels with assignments in Africa, the U.S., Austria, and the United Nations, ending as chief of staff (agriculture and fisheries). He served as president of the European Landowner Organization and operates Spazio Brazzà, a history and art museum.