The Mission of Stealing Heart 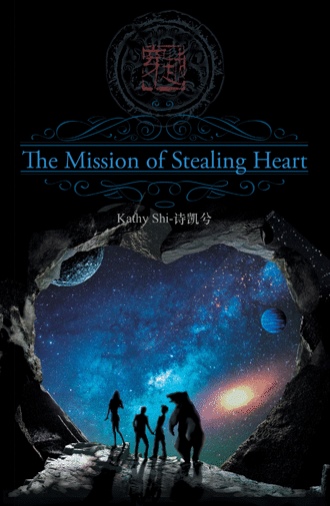 Kathy Shi, author and poet was born in Beijing, China. And she has been living in United States for more than a decade. She is a woman of deep faith and spirituality, enjoying the study and exploration of Buddhist teachings. In August 2015, her first collection of poems, New York Bloody Rose was published in China. In the same year, Kathy Shi completed the first book- The Mission of Stealing Heart-in a science fiction series called The Crossing. The Crossing tells of God's great love for and nurturing of all living things of His Creation on earth. It is set in a world in which human beings have undergone a reincarnation of a kind and this reincarnation is determined by the body's energy levels. The male and female heroes of the novel use the power of Divine Love, which is the union between positive and negative male and female energy, in order to travel through the tunnel of time and space, between past, present and future. Travel can also take place into the spirit world as well as throughout the universe. Each tale from the Crossing portrays the lives of its characters in all its complications and variations. The characters lives are played out against a backdrop of a post-apocalyptic earth, with its disappearing oceans, huge volcanic eruptions and sinking land masses. At the basis of each and every human life is suffering and love. Love may be experienced in many forms: divine, spiritual, romantic, and so forth. It is love that transcends suffering and reveals the future of the world. And it is love that becomes the genesis of unification among world religions.
The story of The Mission of Stealing Heart, takes place between 2015, 1925 and 2119 in the human world New York and the spirit world in Paris, Guangxi, Yunnan of China and New York. In 2015, I lost myself in New York. It is 1925. I am in a cafe in Paris. After making a bet with Coco Chanel, unexpectedly, I end up in the arms of a stranger. After a quick glance at him, our energies suddenly coalesce and I find myself traveling down a time tunnel into the Middle of Netherworld where I meet the soul of Allen Davis, a New York cardiologist and a dying black bear. Allen tells me the sad tale of his lost heart. Together with his Chinese wife, who lives in 2119 New York, the three of us set out on a journey to help Allen find a new heart and a compatible source of energy and while we are about it, to help the dying bear's soul depart its body so that they can both complete the circle of their lives. Since I was merely passing through the Middle of Netherworld, I have no choice but to return to Paris. In this world all is as it was. Coco Chanel has lost her bet with me... Meanwhile, I found myself in a funeral home with Allen Davis in 2015.

In New York in December of 2015, when Mark breaks up with Kathy after three years of living together, she loses herself—and awakens in Paris in 1925. Thus the strangest journey of her life begins.

As Kathy crosses time, space, and the spirit world in an attempt to discover who she is, she visits New York and Paris, along with Guangxi and Yunnan in China, embarking on marvelous adventures on the way. She makes a bet with Coco Chanel and ends up unexpectedly in the arms of a stranger. In the spirit world, she meets the soul of Allen; his singular friend, a black bear named Jack; and Allen’s wife Tracy. But it seems Allen’s body and soul are separated forever, and his soul cannot return to his body. The small group of friends set off to find a new heart and a compatible source of energy for Allen. Will they succeed—and will Kathy ever find her way back to the life she once knew?

In this science fiction novel, as one woman travels through time and space, she encounters new friends in need of help in a distant future.

Kathy Shi is an author and poet who was born in Beijing, China, and has been living in United States for more than a decade. She is a women of deep faith and spirituality, enjoying the study and exploration of Buddhist teachings. In August 2015, her first collection of poems, New York Bloody Rose, was published in China. She currently lives in Jericho, New York.