Life on the Thin Blue Line 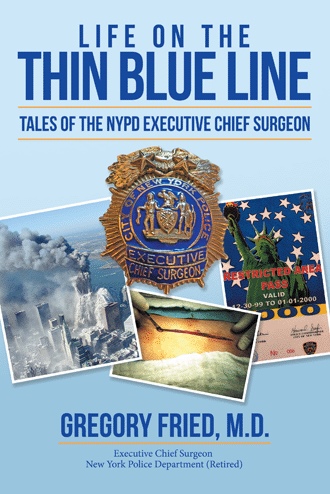 I walked west on Liberty Street. Paper flew everywhere but so did glass, metal, smoke and debris. Smoke from the burning towers filled the air and made it difficult to breathe. People were falling or jumping from the high floors of the inferno. The thought of healthy young people who had gone to work an hour before yet were now crashing to the pavement to their death, gripped me. What could go through your mind in the 15 seconds as you plummeted to your death, escaping a death by fire? What went through the minds of the passengers on the hijacked planes as they saw New York City appear ahead of them as the hijackers headed the plane directly into the World Trade Center? The horror of the events unfolding before our eyes was incomprehensible.

As I approached the temporary evacuation location, there was in front of me, lying on the ground in a pool of blood, a rescuer in a brown jumpsuit who appeared to be a firefighter. He was hardly moving. All around us, shards of broken glass, metal and bits of building fragments hissed by and crashed to the ground. I was quite thankful for the helmet. Bending over, identifying myself as a doctor, I quickly tried to assess the source of bleeding. Blood was pouring from his upper chest staining his clothes, his blood eventually getting on my lower pants. Clearly he had been hit by something sharp and penetrating. My plan at the time was to put pressure on the source of the bleeding and to get him evacuated by the van that had transported me to the site. As I bent down, someone from a distance shouted, “The building is going down!”

A huge low rumble told me I was in big trouble. Looking up, all I saw was debris blotting out the sky. It was far too close for me to even think of running. I was out on the street, located between two bridges that connected buildings on Liberty Street. The South Tower was crashing down on top of me. Out in the open, near the curb, there was nowhere to run and no time to do it.

Suddenly, I remembered the old duck-and-cover drill practiced in high school. I rolled into a ball, grabbed the back of my neck and waited to see what was next. I was a doctor. This wasn’t supposed to be happening. In the minutes that the building took to come crashing down, I thought I would be killed. How can you survive the collapse of a thousand foot building only a few hundred yards away? No, I didn’t pray. I figured if there were a god, he or she would know I really didn’t want to die. So why bother?

I vaguely remember what happened. My face got hot and I felt a burning in the back of my throat. Then it got cold. I was told afterward that the first was residual fire and jet fuel and the second was air conditioner coolant, but I really have no idea except that explanation seems to make sense. The heat significantly burned the back of my throat and nose leading to future complications. Then it got dark. So dark that I actually thought I’d gone blind. Removing my glasses, I couldn’t see shapes or anything. I felt a searing pain in my right chest and my right back and numbness down my right leg. I heard ringing in my ears and muffled sounds. But I wasn’t dead. At least not yet.

It got very quiet but it was so dark that I couldn’t see my hand in front of my face. From a distance, I could hear weak voices shouting for help. I thought I was a blind surgeon but again nothing made sense. It had been just another sunny day, but now the air and the ground was filled with smoke and debris and everything was black. Sitting in the blackness, I began to wonder why I had been blinded. There was no flash of light, just brightness from the building. Maybe the back of my head had been struck so I felt for the helmet. It was missing, and all that remained was the liner of the helmet, just the rim. The force of the collapse had probably ripped it apart.

When you’re a surgeon, the smallest mistake could result in someone losing their life.

Gregory Fried, M.D., who became NYPD’s executive chief surgeon in November 1996, after years of serving as deputy chief surgeon, knows this all too well.

Responding to police officers being shot or seriously injured in the line of duty, however, brings the pressure to an even higher level—especially in the middle of one of the worst crime waves in New York City’s history.

Looking back at a career that began in the 1970s and continued beyond the September 11 terrorist attacks, Fried shares numerous stories of brave patients that battled life-threatening illnesses and injuries.

He also recalls the out-of-control violence that spread throughout New York during his years of service. It was open season on police officers, and he gives readers an intimate look at the life of a police surgeon and what really happens when a police officer is shot in the line of duty.

Fried also relives the nightmare of surviving the collapse of the South Tower on Sept. 11, 2001. Broken ribs, herniated disks, fractured bones in his spine, and a massive internal bleed would effectively end his surgical career, but it did nothing to dampen his spirit.

Gregory Fried, M.D., F.A.C.S., attended Cornell University and NYU Medical School. He began his career at Bellevue Hospital as a general surgeon and became the Executive Chief Surgeon for the New York Police Department. He was a first responder on 9/11 and was almost killed when the South Tower collapsed. While the terrorist attacks effectively ended his surgical career, he continues to stay active pursuing numerous civic and private interests.