All about a Boy Who Was Afraid of the Dark

(And How He Got Over It) 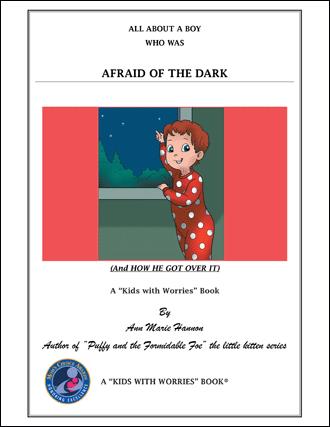 Patrick was almost two years old, when just before his second birthday party, something amazing happened! Patrick discovered he was afraid of the dark, and this occurred at 12 am midnight on the 12th day of the 12th month. It happened when everyone else in the house was asleep, and Patrick woke up, in the dark, all alone!

Now, this situation was very odd, and unlike anything that ever happened to Patrick before. Also, Patrick’s feelings were unlike any feelings that he had ever had before. This new feeling of being afraid of the dark was even more troublesome and terrible than the first time he said his first words, which were “Mama”, "Dada” and “Margy”, his big sister’s name.

That time, when Patrick said his first words, his Grandma Landry and Uncle Joel were there to listen to him, too, and that added to Patrick’s being afraid. But, to his surprise, after he said those words, everyone clapped, and said, “Hooray!” and that made Patrick feel so happy that he completely forgot about being afraid.

At another time, when Patrick's Mom and Dad took him and his sister Margy to the zoo, they went into the elephant house and a huge elephant took a scoop of straw in his trunk and then dropped it over the top of fence where he stayed. The huge clump of straw almost dropped right on top of Patrick but Dad jumped in and lifted Patrick out of the elephant's range just in time.

Then, one day when the family was at the park, a big dog tried to lick Patrick's face and Patrick have some very unpleasant feelings then. But, even those feelings were not as bad as being afraid of the dark. When the big dog licked Patrick's face all over and made Patrick very afraid, his Mom and Dad were there to save him. They quickly lead the dog away and Mom used a wipette to make Patrick feel okay again. So, as long as Mom and Dad were always there to help, Patrick felt safe and secure in no time at all.

That is why this time, at 12 am midnight on the 12th day of the 12th month, Patrick’s discovery about the dark was so amazing and worrisome since there were many things happening all at once.

First, the dark was everywhere, and that was a strange and different experience for Patrick. Next, everything was completely quiet, and that was unlike the other times whenever he would wake up in the morning. Finally, Patrick's night light wasn't shining like it usually did. So, Patrick couldn’t think of any reason why he was awake at all, and that was very confusing. 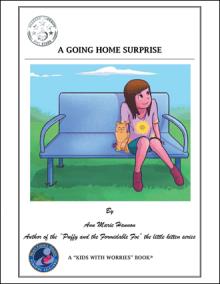 Patrick has been afraid of things before, but this time when he is almost two years old, just before his birthday, he wakes up at midnight —only to learn that he is afraid of the dark. Can Patrick’s older sister, Margy, help Patrick to stop being afraid? Read how it all develops if brother and sister work as a team.

Ann Marie Hannon has authored several books, including the “Puffy and the Formidable” kitten series, Rated ”OUTSTANDING” 2013 Writers Digest SFB Awards. She is currently completing a mother-baby shared fitness exercise and bonding book, and has written lots of fun poetry for children and adults.