Life Understood as a Struggle 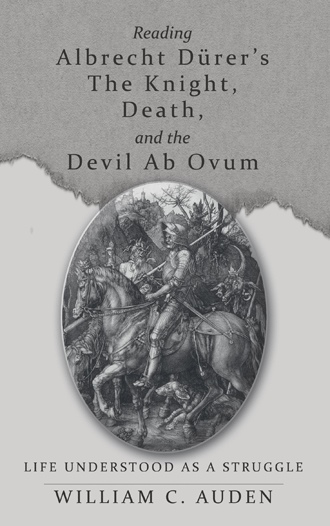 Initially, I was impressed by emotional character of the image. I start feeling a deep fear. The very dramatic black and white color scheme promises the experience of a tragedy, of initially unspecified plot. The location of individual figures also resembles fright. Characters in the foreground represent the knight and his giant horse. In my imagination, it is an allegory of some enormous strength, rather not too friendly. Main characters are imposing fear and terror.

In the background Death riding on a deadly fatigued horse with a melancholy expression on his face, conjures the inevitability of the impending end of each of us. The Death intensifies the feeling of fear that we perceive in the first moment of contact with the image.

Another figure, which hits our eyes when we move our eyes from left to right, is the Devil. It follows a Knight with a stupid expression written on his disgusting face. He seems to be the personification of evil and diabolism impossible to be convinced on any subject. Dread to think about it, what chance we would have if our future would depend entirely on the decision of such individual.
Nevertheless, in fact we have to deal with him every day and probably over our entire life. It is present in our lives too often.

The question is how such an accumulation of misfortunes can be the basis for writing motivational text. Is it at all possible? In addition, if it is possible, then, what extraordinary volts and phrases it requires to achieve such an undertaking?

In Albrecht Dürer’s famous engraving The Knight, Death, and the Devil, a knight, a figure of death, and the Devil represent three significant archetypes of human experience: success, the passing of time, and misfortune. Yet all arouse fear—even terror—and herald the inevitable tragedy of the near or distant future. The question is therefore how such an image of tragedy and misfortune can be the basis for a motivational text?
In Reading Albrecht Dürer’s The Knight, Death, and the Devil Ab Ovum: Life Understood as a Struggle, author William C. Auden provides a connection between these figures and the demands and expectations of modern-day society when it comes to being successful. It will help us better understand how the path to individual success requires values that serve both others and society itself. While there will always be pressure to gain success “at any cost,” a moral approach to personal success can be informed by benevolent social behavior, tolerance, and acceptance.
Although success in business or in life can be a struggle, understanding the ways success, misfortune, and inevitability work together to provide us with motivation can help us find a balance between modern social needs and the social pressure to achieve success—for both ourselves and for our society as a whole.

William C. Auden is a thinker and philosopher who has dedicated his time to analyzing the social context of human interactions. Over the last thirty years, Dr. Auden has taught several academic courses, and those opportunities have allowed him to deeply engage in the modern social environment.