Listen to the Patient

Of Life and Neurosurgery 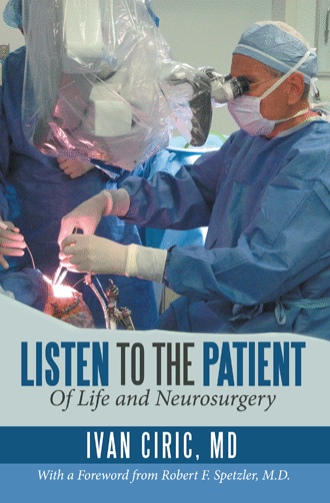 I was called to the Emergency Department on an otherwise lazy summer afternoon to see a 45-year-old woman with an acute, sudden, bursting headache. S was fully alert and neurologically intact. On examination the only abnormal finding was stiffness in her neck. The CT scan confirmed the presence of hemorrhage around the brain (subarachnoid hemorrhage, Grade I-II). The cerebral angiogram showed a small, 3 mm. aneurysm on her right carotid artery less than half an inch after it enters the skull. By the time the angiogram was done it was already late in the evening. After discussing the clinical and angiogram findings with the patient and her husband, I recommended that we proceed with surgery early the following morning in order to have the optimal operating conditions—as opposed to starting the operation at midnight. The patient and her husband were agreeable with this decision. I went home to catch up with some sleep. As I lay in bed going through the steps of the operation, my thoughts blended imperceptibly into dreams of the operation.

As I entered the room in the holding area early the following morning I greeted S with a smile on my face and an apprehension in my soul that I have always experienced when facing surgery for an aneurysm repair in patients with Grade I-II subarachnoid hemorrhage. In contrast to the stages III to V subarachnoid hemorrhage where the prognosis depends as much, if not more, on the patient’s poor preoperative condition, the outcome in patients like S who are in good condition is almost exclusively dependent on the neurosurgeon’s surgical adroitness and experience. I was fully aware, therefore, that the outcome of the operation, life or death, neurologic integrity or lifelong disability, rested in my hands. There was only one way to honestly accept and reciprocate the patient’s trust in me, and that was by the way of a salutary outcome. My uneasiness got a boost when S asked me “Doctor Ciric, I feel so much better this morning, do we really need to do this, with all the risks you explained to us?” I took her hand into mine and said that the reason she felt better was that the three doses of an anti-inflammatory steroid she received overnight had kicked in by reducing the irritation surrounding her brain caused by the hemorrhage. I also added that the danger of a re-bleed was not only the same, but would increase with the passage of time as the clot covering the point of rupture gradually dissolved, opening once again the flood gate for a recurrent hemorrhage.

The skull was entered via a craniotomy at the junction of the right temple and the frontal bone. However, in order to gain sufficient maneuvering room to occlude the aneurysm, which was tucked deeply under the brain, a part of the skull base had to be drilled away as well. Let me stop here for a moment to mention that I have often thought of the sequential connotations of a neurosurgical procedure. It all starts with the momentary ethical trepidation the instant before the scalpel first penetrates the skin of another human being, no matter how lofty the reason behind it. This short-lived uneasiness merges imperceptibly into the craft-like routine of opening the head. In the next phase of vanquishing the specific pathology the operation becomes an intuitive art only to blend again into craft during the closure of the wound. The circle closes once again with the ethics of assessing one’s performance honestly and truthfully after surgery when meeting the family in the waiting area.

Switching seats with the neurosurgery resident, I asked that the microscope be brought into position. Working comfortably under the microscope, I opened the dura and the arachnoid membranes that envelope the brain. This exposed the corridor between the frontal and temporal lobes. By separating the two lobes gently, I came upon the major branch of the carotid artery known under the acronym of MCA. By following the path of this red river of life down to its origin, the carotid artery and the aneurysm came into view. This proceeded slowly as there was a small blood clot enveloping the carotid and the aneurysm. Any rash move could have displaced the scab covering the opening in the aneurysm, leading to a brisk hemorrhage that would have instantly obscured the field, a frightening occurrence dreaded by every aneurysm surgeon. After gently flushing out the clot, I could see under a high-power microscope magnification the swirling of blood behind the thin aneurysm wall. Neurosurgeons have at their disposal a whole assortment of different sizes and variously shaped aneurysm clips. I chose a curved clip of appropriate size that I could apply to the base of the aneurysm without encroaching on the carotid artery itself. Placing the clip on an aneurysm is the zenith of the operation. There is no question that being calm, cool, and collected and having a steady hand are the prerequisites for a successful clip application. Yet, at that very moment, deep down on a visceral level neurosurgeons feel something akin to a shiver running down their spines. The effervescent, physically and emotionally utterly pleasing sense of relief that neurosurgeons experience after a successful clipping of an aneurysm is beyond description.

As she woke up from the anesthetic in the recovery room S’ first question was “are we done, can I go home now?” I was on cloud nine. I nearly hopscotched my way to the family waiting area to bring the good news to her husband and children. Oh, how wonderful it felt to be hugged! I reciprocated in kind and from heart. S remained a lifelong grateful patient.

In Listen to the Patient Ciric weaves together the story of his life, which brought him from a continent and ocean away to the US, with the meaning, secrets, and ethical aspects of neurosurgery, including the unique privilege and daunting responsibility of navigating through the hidden nooks and crannies of the human brain. Through a series of select patients’ stories and operations, Ciric describes the cascading steps leading up to a neurosurgical procedure for a variety of brain and spinal cord maladies, and he shares the intricate details and majestic beauty of brain and spinal cord surgeries.

Blending technical information with personal stories and humor, this memoir reminisces about a life well lived.

“This is an extremely pleasant walk through reminiscences in the life of a true neurosurgical giant. Colleagues and laity will gather much from his life–well-lived and hard-worked—and the sage lessons derived from the collisions of past and present, success and failure, hope and despair, are eloquently described in this story of dedication and devotion from the humble humanity of this remarkable man. I highly recommend the read.”

“This book is an inspiring odyssey. Its elegant prose describes the character and accomplishments of a premier neurosurgeon. His intellect and surgical prowess are responsible for important technical and conceptual advances in the challenging field of neurological surgery. This is a chronicle of a true ‘surgeon’s surgeon,’ a valued educator, and a role model for many of his peers.”