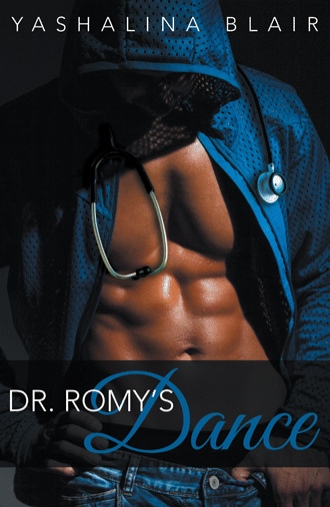 Sasha turned toward him as he came closer and placed her hands on his shoulders, then leaned upward for a kiss. The kiss was explosive on contact, sending a jolt straight to Jerome’s toes and back up to settle in his groin. This was the first time he’d reacted to a mere kiss from a girl in forever. He whispered the name he’d finally learned a few hours before, “Sasha.”
Sasha was reeling from the kiss. She clung to his broad shoulders for dear life. His lips were soft as he opened and closed them, gently urging her to let him in. She pulled back instead, needing to catch her breath. This was going too fast, and she could feel her nipples harden into tiny little buds, aching for his touch.
Jerome stepped back, not wanting to push her too fast. He took into consideration how long it had taken her to even speak to him, let alone let him kiss her. And he knew that she was not the kind of girl he could have for a booty call, not that he wanted to anyway. It would be better to move away from foreplay, Jerome thought.
“Come, make yourself comfortable and have a seat. I’m so glad you decided to wait for me,” he spoke softly, aware that Eric was in the spare bedroom. Jerome sat on the sofa next Sasha after she sat in the spot he indicated for her to get comfortable.
“I had a really good time,” Sasha said, all the while staring at his soft lips. “It’s very nice to know that you have a head on those …”
Sasha’s words trailed off breathlessly as Jerome leaned in to claim another kiss, this one hotter than the first. She opened her mouth this time, and Jerome’s tongue immediately slipped inside to duel with hers, and then withdrew, only to have hers follow his inside of his mouth. She ran her hand down his chest and stomach, feeling the hard muscle jump beneath her fingers. She stopped at his erection … In a voice so husky she barely recognized it, Sasha asked Jerome, “How about that dance?”
“Shh, not so loud. My brother may wake up. Let’s go to my room,” he whispered. He stood and reached for her hand, then led her down the darkened hallway to his bedroom. He closed the door behind them and led her farther into the room, then walked away, leaving her in total darkness for ten seconds. When he turned on the light, it released a soft, dimly set glow. Sasha turned in a full circle. These walls were done in soft beige. Slightly lighter in shade than the living area.
His king-sized bed was covered with a silver, blue, and beige comforter. A set of beige reclining chairs sat against the far right side of the wall, where he led her to sit. An unlit fireplace sat between the two recliners. On the opposite wall was a large flat panel television and what appeared to be a radio system beneath it; all of it was set into a wall mount that looked like a hanging entertainment system. Across the room was a set of double french doors that led to his bathroom.
The room was very impressive, and her admiration showed on her face. Jerome walked toward her with a knowing smile on his face and leaned forward to plant a chaste kiss on her lips. He then walked away and without a word walked toward a nightstand and pushed a button that slid open a panel holding four small remote controls. He took out two and lightly pushed the panel, which slid smoothly back into place.
The first remote turned on the fireplace. The second remote turned on the radio set in the wall. Immediately Lilo Thomas began singing, “Baby please don’t go, stay a little while,” and with the dim glow of the light framing his body, Jerome began to undulate. He lifted his shirt so slowly she could count the muscles dissecting his abs two at a time. Next his pants slid from his body like warm butter.
His torso glistened with a soft sheen of sweat as he moved before her clad only in a pair of black sport boxers, his hips making a figure eight. She reached out, but he stepped back before she could touch him, and continued his erotic torment. She was now breathing in soft, heavy pants, more aroused than she’d ever been in her life as she watched his hands caressing the waistband of his underwear. He was taking an eternity coming out of them, and the more he prolonged, the more excited and tensed she became. The core of her throbbed, and squeezed out its moisture so she tightened her thighs, and then relaxed them in an effort to gain relief from the persistent tingle there.
It didn’t work. As she waited, staring with her lip tucked between her teeth, she finally realized what she hadn’t noticed in her distracted state, when impatiently she looked up into his eyes. They glittered at her through the firelight as he teased her, drawing out the moment by keeping the underwear on. Sasha stood, walked over to him, and hooked her finger inside the waist of his underwear, and then pulled him forward. She kissed him on the neck, working her way down to his chest.
Jerome stopped teasing Sasha the instant she reached out and grabbed the waistband of his boxer briefs. This was something he’d wanted for weeks now, so his private dance became a slow dance as he wasted no time sliding her dress off to reveal her very sexy underwear.
Together they continued their slow dance in their underclothes as Lilo’s serenade reached a crescendo. When it was done, he picked her up and carried her to his bed, then laid her down.

Jerome Jacobs is a good son, student, and brother. He has known he wanted to become a doctor since he was a child, but the sudden death of his father has left the family struggling to pay his med school tuition. His mother wants him to come home and take a job with the education he has, but he is determined to become a doctor. His only viable solution is to moonlight as a male exotic dancer.

Sasha is a spoiled daddy’s girl who does everything to please her father. When her friends take her to the club where Jerome performs as a birthday gift, she finds herself drawn to him against her better judgment—and contrary to her father’s goals for her life. Her father’s disapproval leaves Sasha facing an ultimatum that could destroy both of their hearts.

Because Jerome’s life isn’t complicated enough, his mother sends his younger brother to stay with him with the hope Jerome will straighten him out. Instead, his incorrigible brother finds more trouble to get into—taking Jerome down a dark path he may not survive.

In this novel, a med student working as an exotic dancer to pay for his tuition and a spoiled, rich daddy’s girl fall unexpectedly in love, despite the many obstacles in their path..

Yashalina Blair was born and raised in the District of Columbia. She has been a senior cosmetologist for twenty-one years and is currently studying IT. She wrote her first book in 2009. She currently lives with her husband and their two children in Maryland.