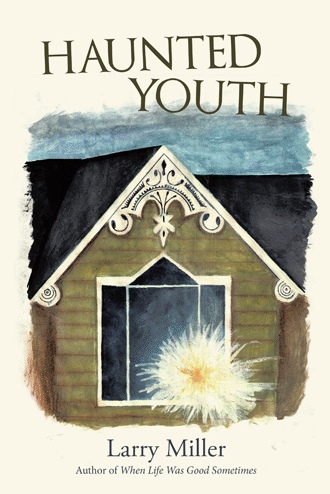 “Where’s Jerry, Mom?” I asked one morning. It was late July, and the sun was shining with beams of possibilities for the day.

“I don’t know,” she replied. She was cooking oatmeal for Sandra and David. Marilyn, I supposed, was off visiting one of her friends, either Wanda Pipes or Mary Lou Warren.

“But wherever he is, you bring him back home. You two have to get the grass cut before you do anything else. You hear me?”

She wasn’t in the best of moods. It was hot. She had a load of clothes sitting in her wicker basket, ready to take down stairs to wash. I knew that doing the wash was not her favorite job. The machine was an old one that broke down regularly, and the clothes, after the washing cycle, had to be put through a hand wringer, an old contraption that took a lot of strength in order to turn the handle. And then the clothes had to be hung outside, on the clothes line; in bad weather, they were hung on lines in the dark basement.

“And I want you to eat something, before you go off looking for your brother. You hear?”

“Yes ma’m,” I said, taking a chair at the kitchen table.

She put a bowl of oatmeal in front of me, and a glass of milk. I took the jar of honey from the table and dripped some of it on the oatmeal. We didn’t have much actual sugar, so we improvised when it came to sweetening our food.

I began to spoon the oatmeal into my mouth, wanting to get out of there as quickly as possible.

“And stop eating so fast,” Mother said over her shoulder. “You act as though someone’s about to snatch the food away from you.”

How, in heavens name, did she know that I was eating fast? I looked up at Sandra. She smiled understandingly. David was too young to be aware of any possible problems that might crop up between Mother and me.

When I had gulped the last of the oatmeal down, I hurried my dish to the sink, ran out the back door, and began scouring the neighborhood. I don’t believe there were more than a dozen days in the first ten years of my life that I would have journeyed out into that vast wilderness of a world without my twin brother. That was one of the great advantages of having a twin; I always had a companion, for good or bad.

But I couldn’t find him. I tried Joe’s house, and Jack’s. And for sure he wouldn’t have gone to Polk without me. And a hurried trip to Eighteenth Street was fruitless. It was getting to be a mystery.

As a last resort, I started over toward the area where Charley and Dick lived. I figured that perhaps Jerry had gone to our diamond at Eighteenth Street, looking for a ball game, and then had gone on over to those guys’ houses to look for them. At the same time, it just didn’t make any sense that Jerry would go off to play baseball without me.

My mind was wandering as I strolled north on Sixteenth Street and then turned west when I got up to Griswold. I had been in this area a few times, but not enough times to really get to know who these neighbors were. A few of them looked familiar, those who were sitting on their porches or working around in their yards. I knew some of their names, and being diligent adults and neighbors, they probably knew who I was, since most of the adults watched over each others’ children, a kind of collaboration that kept most of us kids on the straight and narrow, at least to some degree. It was hard to get away with much in those days, although I have to admit that I was successful much too often. My reputation was such that the neighbors all kept their eyes on me, whenever I was around.

Anyway, I suppose I was walking somewhat purposelessly. Time passed, as did the houses.

Then it was that I came across the house. I had passed it by a few times before, without really noticing it. But for some reason that I cannot define, I stopped to really look at it this time. I mean, really look.

Sure, it was a big house, bigger than all of the others that dotted the yards in Germantown. But it was more than just its size that got my attention. It was the curious way it had been built.

It was three stories tall, with each of the upper two stories becoming slightly smaller than the one underneath, so that it resembled a tall, wide ship, like an old steamboat, the pilot house being the upper deck, or story. And that third story was curious looking, with a pinched look about it.

Like a ship at sea, the house had battled the storms of years, and had emerged scathed but still standing, like a valiant warrior ship of old. The clapboard siding was darkened almost to black in places, and here and there were cracks in the boards. Trailing ivy had fought the mildew and had pretty much succeeded in winning the battle; the ivy hung like Spanish moss, sneaking its way into crevices and cracks.

The house was sitting back a ways in the yard, probably about twenty feet or so, and the east, or side, yard was immense. In fact, no one else in all of Germantown-at least as far as I can recall-had as big a yard. It was so huge that it would have been possible to build another house and a half in the yard. And I could also see, through the dense tangles of trees and shrubs, to where a wooden fence ran along what must have been the neighbor’s house that bordered the rear yard. And it was obvious that the huge area was no little flower garden and vegetable garden, but a veritable jungle of greenery amid a forest of trees.

It is 1940 and a war is raging in Europe. But in a German-American neighborhood in Port Huron, Michigan, there is a different battle taking place. As the movie Frankenstein debuts in the theatre, a ten-year-old boy and his twin, Jerry, finally convince their mother to let them see it.

Still in that blissful stage of youthful innocence, the twins head to the theatre, filled with excitement, the hope of being frightened out of their wits, and an anxiety that borders on mania. Yet surviving the terror of Frankenstein in a dark theatre is not the only obstacle they must overcome during that summer as they are initiated in the art of bag swinging, baseball throwing, and tunnel building. When a chance meeting with an elderly woman brings the boy a different challenge that includes a desperate search to discover whether ghosts really do exist, their special relationship forces him to reexamine the meaning of a true friend.

Haunted Youth shares the delightful tale of a ten-year-old boy’s coming-of-age journey through 1940s America as he tackles obstacles, finds an unlikely friend, and encounters a shadowy mystery.

Larry Miller is a former American Literature teacher who is the author of When Life Was Good, Sometimes. He resides in Port Huron, Michigan, where he is at work writing a book of essays about life’s vagaries and his personal experiences.