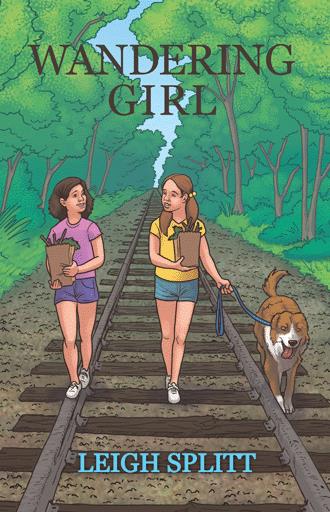 When Peggy returned she handed some of the items to Mark and Linda, and the three children carried everything for their picnic out to the tree. There Mark and Linda gathered dry wood, while Peggy spread out a red-and-white checked tablecloth on the ground.

Then Linda hunted for rocks—big ones—and placed them into a ring on the mostly bare area near the tree’s roots. With a flat stick she scraped the earth inside of the circle, clearing it of all of the remaining clumps of weeds and grasses. The Scout picked up a handful of thin twigs and another handful of larger sized sticks. Kneeling in the dirt, she proceeded to form a triangle with several of the sticks—inside of the ring of rocks—and set the twigs into a pile inside of the triangle.

"It’s an old Brownie trick," Linda explained to Peggy, who was watching over her shoulder. The Scout took a long wooden match from a matchbox, struck it on one of the stones in the circle to light it, and held the burning match in between the twigs. The match set the twigs on fire, burning down until it became short. Quickly, Linda let the match drop before it scorched her fingers.

The fire was soon burning brightly. The children skewered hot dogs, and then held them above the campfire. Flames from the blaze shot up to lick the meat, blackening areas that they touched.

Linda’s hot dog had finished cooking, and she was just pouring ketchup onto it, when they heard the shout. The children looked toward the noise to find out who had made it, but while sitting on the ground they were too low to see over the tall grasses that were waving all around them. Mark finally stood up when the shout came again.

“Hey,” he said and nudged Peggy with his knee, “some guy over there is yelling at us. He’s standing in his backyard, waving his arms.”

Linda scrambled to her feet, still holding her hot dog. “He’s not just standing there,” she announced, “he’s coming over.”

“It’s the fire.” The boy was the first to understand. “He’s saying something about our fire.”

“What do you kids think you’re doing?” Everyone could hear the man plainly now. “Trying to burn down this field, and all the houses around it? You!” he shouted at Peggy, who was still cowering on the ground. “You’re the Bryant kid, aren’t you?” She merely nodded. “And you!” The man’s finger pointed at Mark accusingly. “I’ve seen you around here before. You’re Dick Bradley’s kid. Now just who are you, young lady?” He turned on Linda.

“I’m Linda McCollough,” she said in a low voice.

“We’re having a cookout, sir,” she answered. “We weren’t trying to start a fire in the field; really, we weren’t. We were being very careful. See?” The Scout indicated toward the ring of stones. “The fire won’t spread.”

“It certainly won’t,” he replied, “because you’re all going to put it out right now. You do have a bucket of water don’t you, since you’re being so careful?” He glared at them.

The girls looked at each other. They didn’t have any water! Linda swallowed hard. “We were planning to extinguish it with dirt, sir,” she said, trying to sound very responsible.

“Good luck,” he said sarcastically. “There isn’t enough loose dirt around here to begin to extinguish it.”

In response, Mark started tossing available dirt onto the flames. It didn’t do much good. The man was right; there wasn’t enough dirt to do the job.

“And then,” Linda continued, seeing the problem, “Peggy lives right over there, and we can always get water from her house, in case the dirt doesn’t work.”

“You’d better go get some, before this fire gets out of hand,” the man snapped at Peggy. The frightened girl finally stood up, grasping the tree trunk to support her shaking knees. She turned and fled toward home. The man laughed nastily.

“Stop laughing!” Linda was astonished at the volume of her voice. “We weren’t doing anything wrong, nothing at all. We were just having a cookout, and the fire didn’t spread, and you’ve got no right to make us feel guilty!” she finished.

The man stared at Linda. She was standing with her legs apart, hands on hips, and her expression was one of righteous anger. As he watched her, the girl flipped back her long pigtails defiantly. Normally, she didn’t contradict adults, but this was a democratic society, and justice was justice. She knew her rights.

She heard Mark behind her, clearing his throat. “Peggy’s coming back with the water now, sir. The fire will be out in a minute.”

“Yes, well.” The man kept looking at Linda. “I’ll just stay here until it is. Then,” he continued as his expression hardened, “I’m going to call your parents and tell them what you three kids have been doing today. I’m sure they’d be very interested to hear their children are potential arsonists.”

“Potential arsonist!” Linda was furious. “How dare you call us that?”

The man looked as if he was about to strike her. Quickly, Mark moved between the two combatants. He took the bucket of water from Peggy, who had been holding it while watching the fight in amazement.

“Move back,” the boy whispered to Linda, “and don’t say another word. You’ll only get yourself into more trouble. Help me put this fire out.”

Nine-year-old Linda McCollough, the only child of overprotective parents living in a quiet Wisconsin neighborhood, loves to ride her bike, hang out with her Brownie troop, climb the iron bars at the playground, and tease her teenage babysitter.

One summer day after Linda heads to the park, she meets Peggy Bryant, a championship swimmer from a middle class family. Soon they discover that they are both seeking the same things in life: freedom and adventure. Against the wishes of her parents, who think Peggy is a bad influence, Linda develops a bond with her new friend that prompts her to secretly launch a plan that leads her and Peggy into trouble, deep within the forbidden woods behind the railroad tracks, where they soon learn that adventures always come with challenges.

Wandering Girl shares the tale of a young girl’s journey through the woods with her new best friend that teaches them valuable lessons about perseverance, consequences, and most importantly, themselves.

Leigh Splitt is a model, an actress, and a writer. She graduated from West High School in Appleton, Wisconsin and Drake University in Des Moines, Iowa (with a BA in News-Editorial Journalism and Mass Communications). Leigh has traveled through 49 states and 25 countries. She and her husband, David White, live in Grand Chute, Wisconsin.