Short Stories of Unlikely Encounters Shaped by the Hand of God 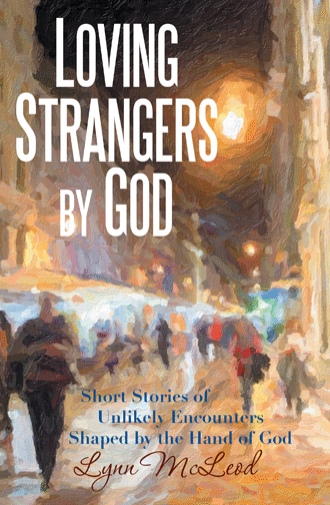 She thought he looked adorable, popping his attention back and forth between driving and petting Rowdy, their black lab riding half in the backseat with his front quarters and paws languishing over the armrest between the two of them. The years had been kind to her husband. His eyes were a bit turned down on the edges with a few wrinkles accentuating how his skin wasn’t as taut as it had once been. The coloring of his cheeks had somewhat faded into an ashen hue on the places of his face framed by the two-day stubble of growth from a beard, gray as his hair. The broad shoulders she first laid her head on now slumped from decades of wearing the weight of their world. Many years she believed the sparkle in his eyes would never return. But there it was, reminding her, from behind the blue, his spirit was still as young as it had been forty years earlier on this very day.
She remembered it clearly, as if a gift to be periodically unwrapped anytime memories were needed to fill in gaps when intimacy seemed distant. On their wedding night, they lay peacefully in the dark, waiting for the next sunrise to pronounce to the world. Indeed it was true. They were now husband and wife. While she sheepishly hid beneath the covers cuddled close under his arm, he fondly kissed her forehead. He chattered on, describing the plans he had for the life they would share, uncharacteristic for the quiet fellow she believed him to be. In those first moments, he promised her someday down the road they would take a trip across the United States exploring all the wonderful places they could only dream about on their first night together.
“Someday down the road” converted their dream into an anthem they recited hundreds, if not thousands of times. The youthful spirit they saved could not stay the years from relentlessly speeding past. Today she nodded her head in appreciation for the irony in “down the road” had not escaped her.
Just as he planned, they enjoyed a good life. It had not been trouble-free. Certainly in forty years they had come face-to-face with many curveballs, disasters and setbacks. Yet he hung in there with her just as she did with him. Two grown children, three grandbabies, a paid mortgage, and a retirement promising a life of leisure was now theirs to cash in on. To celebrate, they took the early dreams and ventured from their hometown in Vermont to see as much of America as they could possibly stand and more.
New York City delivered a dreadful play on off-off-off Broadway. Laughing about their good taste in theatre, they headed toward the Liberty Bell in Pennsylvania. Shopping on Michigan Avenue in Chicago proved a delightful exercise in spending nearly a hundred dollars on what others may consider next to nothing, but they cherished as treasures. After Mount Rushmore in South Dakota and Yellowstone in Montana, they found themselves drinking wine until they were down right silly in Napa Valley, California. After meeting a couple friendly men in northern Texas, they traveled across the red clay in Oklahoma toward Tennessee to compare cowboys to country boys. With a smirk from under the wide rim of a black signature cowboy hat, they were told there was a difference, even if the hats looked the same. Honky-tonking down Broadway, Second Avenue and River Front Park in Nashville proved the Texans were right. Music City was indeed wonderfully different.

As the sun was beginning to set on the summer evening, they decided to put in a few hours on the last leg of their trip toward home, north on highway 65. Her husband was still laughing about the Elvis impersonator introducing them to Forrest Gump on the sidewalk in front of Tootsies. It struck her how long it had been since she saw him relaxed, laughing, and flat-out enjoying life. Yes, retirement was good for him. With one hand resting casually on Rowdy’s head, petting behind his right ear, and the other on the steering wheel, her husband turned, winked at her, smiled, and then looked back toward the road in front of them.
Terror sharply slapped across his face with his eyes instantly widened beyond anything recognizable. Before she was able to record what she was witnessing, everything went black.
Fifteen steps outside the hospital room, a nurse with long auburn hair loosely tied up in a knot, leaving random pieces to punctuate the urgency of her posture, held a phone to her ear as she paced in front of the nurse’s station. Her blue scrubs fit loosely over a flowered tank top with her running shoes matching the purple that peeked out from the V neckline. She unconsciously tapped her forehead just above the square wire-framed glasses shielding her blue eyes and contrasting against her pale ivory skin, marked only by a hint of cosmetics.
“Yes, I know it is late.” She paused. “22:14 to be exact. I don’t care what time it is. I’m telling you there is a dog out there running scared. I believe it is a black lab that will answer to Rowdy. You have to find it and get it here to me as soon as possible.” Pausing again, she listened. “Of course it is important. I can assure you it is the most important thing you are going to do all week!” There was another pause. “I’m not going to listen to any excuses. If you don’t get that dog and get it here now, you will find out exactly how angry I can get.” There was another pause. “Thank you. That’s all I wanted to hear. I’m in ICU. I’ll call down to security in the ER and tell them you will be coming. Thank you. This really means a lot.”
In room 312, she tried to open her eyes. The pressure in her chest felt like a seven-story building collapsing on top of her. She could faintly hear the beeping of a monitor as it recorded her heart beating and the pressure of her blood. Compressions from a ventilator hissed rhythmically in unison with the beeping. A sharp pain reverberated throughout her right side as she twisted to lift her shoulder. She wasn’t able to move. The tube inserted down her throat to open her airways made it painfully impossible to groan. Consumed by the numbness, she surrendered, slipping back into unconsciousness.

Deep inside each of us a miraculous yearning to be known is sewn into the places God knows best. From the first movements within the womb to the last breath we take, "know me" is whispered throughout our lives.

Author Lynn McLeod's, Loving Strangers by God, collides the two adages we were raised with - "stop to smell the flowers" and "don't talk to strangers." Happening amid the impact is where she reveals some of God's most mysterious artwork. What if strangers were actually disguised flowers? What if secrets within us could only be unlocked through their eyes? And what if the beauty in God's creation is especially miraculous when found there? Most of us can point to an unlikely encounter with a stranger that held a powerful new appreciation for how we could be known.

Told through short stories, each chapter skillfully studies how God's mighty, powerful, and unfathomable hand touches us with the strangers who cross our path. Among those you will meet are a young girl accepting bubblegum from a stranger who teaches her the protection found in truth, a man in an elevator who redirects the path of a troubled woman as he prays, a millionaire who refuses to allow changes in life change her, a blind author who encourages a clear vision, and a nurse who comforts a critically injured patient by finding her missing dog.

In Loving Strangers by God you will begin to recognize not only how strangers impact your own life, but also how as a stranger you impact the lives of others.


"I remain confident of this: I will see the goodness of the Lord in the land of the living." Psalm 27:13
Now promise me with the loving guidance of our Heavenly Father you will take the very best care . . . then share it!
Blessings of light, joy and peace!!!

Lynn McLeod is described as a “noticer” who writes. Recognized as a devoted Certified Christian Leadership Coach, she lived the majority of her life in central Illinois before moving to a suburban community south of Nashville, Tennessee. Carrying with her a degree in Journalism from Southern Illinois University, a vivid imagination and a trusty laptop stored carefully in the nap sack of wonderment, she soon discovered her creative fate. Always including an underlying theme of hope, her faith in God is the seasoning that binds.