The Adventures at Arrowhead Island 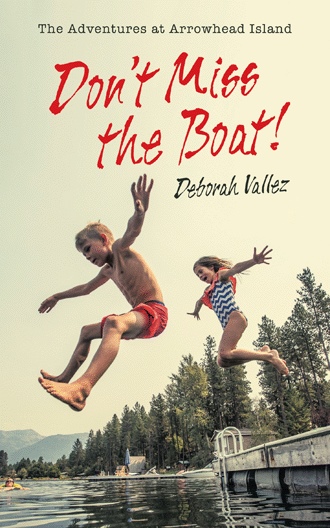 The southeast side of the island had the best place for swimming and launching the boat. There was a large sandbar. A sandbar was found in shallow water and was a good place to play and swim. All of the Bensons learned to swim at an early age, and their visitors were given life vests if they did not know how. Nowadays, there are even life vests for dogs. This wasn’t the case in the 1960s, but Anna was a natural-born swimmer, which was a good thing for a dog in this family.
Tom had been skiing for over a year on two skis. He wanted so badly to slalom like Joe and Dad. This time, Mom, Debbie, and Anna stayed on the beach to cheer for him. Dad and Joe took the boat out. Joe was the observer. Tom wearing a ski vest, waded across the sandbar and then swam a little further, pushing the skis in front of him. The water was a little cooler away from the sandbar. Debbie crossed her fingers. When he got to the area Dad told him was best, he put the right ski on first. The left ski was adjusted to be loose on his foot so that he could drop it after takeoff.
Dad circled the boat around. Tom grabbed the ski rope, moving it over his head, and grabbed the handle. He was thinking over and over in his mind, “I can do this. I can.” He bravely hid his nervousness and positioned the rope between the two skis, holding the handle with both hands. He held the skis with bent legs, allowing the tips of the skis to rest just above the water’s surface. “Taxi,” he said. The boat moved forward slowly but tightened the rope in Tom’s hands. The skis were positioned perfectly. Tom felt the force of the water against the skis just like he wanted it.
“Hit it!” Tom yelled. The boat went forward at what felt like light speed. Tom felt great. Everyone was holding their breath in anticipation. Dad brought the boat around the island for Tom to drop the left ski in front of the beach. Tom bent his toes and lifted his foot from the ski. While he tried to put his left foot behind the right, he lost his balance and fell.
Joe yelled to Dad that Tom fell. As had been done for Joe and Mom when they learned, everyone was prepared to do this over and over until it finally worked. Dad brought the boat to the dropped ski floating in the water. Joe leaned over to pick it up. Dad brought the boat near Tom. Joe gently dropped the ski, propelling it to Tom, and said, “Man, you almost had it. Looked good, Tom.”
“Okay, let’s do this!” Tom was ready to try again.
From the beach, the girls shouted, “You can do it, Tom! You can do it!” Debbie felt like her heart was beating out of her chest. Her fingers were crossed. Anna was barking and running in circles! Mom was smiling with her hands ready to clap.
“Okay! Hit it!” Tom commanded. Dad accelerated the boat. Joe kept an eye on Tom and let Dad know how he was doing. Tom thought to himself, “Okay, okay, you can do this.” With a thumbs-up, Tom let them know he was doing fine and was ready to try dropping one ski again.
As planned, Dad took the boat past the island and circled back around the island. When they reached the starting point again, Tom would try again to drop a ski and slalom.
Tom was so excited. As they came around, he saw Mom, Debbie, and Anna watching, waving, yelling, and barking! He slightly lifted his left leg, just to see what it would feel like with only the right ski. He gave Joe the “thumbs-up” and dropped the left ski. His whole body worked to balance him on one ski. Once the quivering subsided, Tom put his left foot in the position behind his right on the slalom ski. He was still going! He did it! He did it! Dad honked the horn on the boat and turned his head to smile and wave at Tom. Joe was hooting and hollering. The island was alive. To Tom, it felt like every living thing was celebrating and clapping for him!

Summertime. It’s the time of year most children love. They leave classes behind and do what they love—have fun! Sometimes the fun includes a family vacation.

In author Deborah Vallez’s Don’t Miss the Boat!, The Adventures at Arrowhead Island the Benson family wastes no time in enjoying their summer vacation and head out for adventures on Lake Wateree. Join this energetic military family—Joe, Tom, Debbie, and, of course, Anna, their fearless pup—as they explore an island full of history and treasures from the time Wateree Indians lived there long ago. Share the fun and excitement as they test their skills at boating, waterskiing, fishing, and camping on a deserted island they call Arrowhead Island!

Lose yourself in the excitement of Don’t Miss the Boat!, The Adventures at Arrowhead Island. Let your imagination take you on a summer adventure.

Deborah Vallez was born in Columbia, South Carolina, to a military family with two older brothers and an assortment of pets. During her childhood, the family lived in South Carolina, Virginia, and Maryland while their father completed numerous additional duty assignments abroad in support of the U.S. Air Force operations.

Deborah graduated from the University of South Carolina with a bachelor’s degree in elementary education and from Webster University with a master’s in computer resource information systems management. She draws inspiration from her many life experiences, including a twenty-year career as a U.S. Naval officer and other adventures as an elementary school teacher, a program analyst subject matter expert for international integration supporting U.S. Joint Operations, and a small business owner supporting science technology engineering and math programs for children ages four to fourteen years old.

Deborah has one daughter who is now an adult working and living near Washington D.C. Deborah lives in Chesapeake, Virginia, with her dog Uli, and two cats, Honey and Desi.