Coal in Your Christmas Stocking 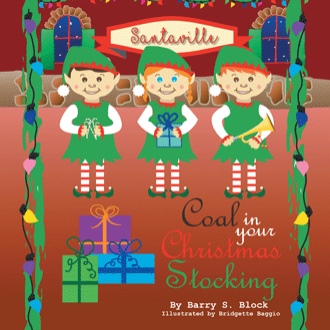 After careful scientific examination (looking at it verrrrry closely), it has been determined that this piece of Coal contains small amounts of Santanite and Elf dust.

Little Tommy Robertson doesn’t believe in Santa and isn’t what you would call a good boy. Rather than helping around the house with Christmas preparations, Tommy prefers to play video games and watch television. And then one morning, he hears a knock at the door. When Tommy opens the door, there’s no one there, but on the doorstep, there is a large black rock with a note that says, “I’m watching you, S.C.” His mom has told him that kids who misbehave may get coal in their stockings instead of goodies, and now Tommy is getting worried. He takes the dark rock to a gemologist to discover what’s really going on. There he learns the story of how the legend of coal in kids’ stockings came about. Will the tale he hears help him to change his ways? In this children’s story, a boy who doesn’t believe in Santa, and won’t help with Christmas preparations, finds the faith to believe through the story of coal in Christmas stockings.

Barry S. Block is a Graduated Gemologist from the Gemological Institute of America and a Master Gemologist Appraiser® with the American Society of Appraisers. He has been active in the jewelry industry since 1967 and has been an independent appraiser of gems and jewelry since 1989. He currently lives in Long Island, New York. This is his first publication, inspired by his interaction with the children of his wife’s 2nd grade class.