Valley of the Skeletons 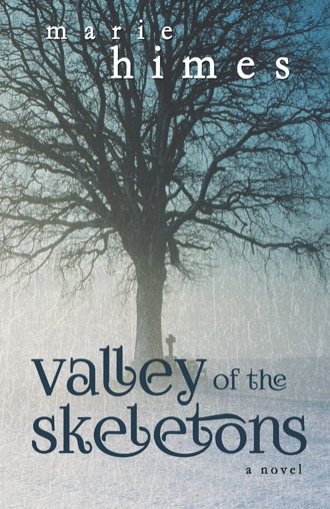 Ted walked up to the old tar paper shack. The porch creaked as he stepped onto it. A tulip tree, in full bloom, scraped the old tin roof, giving him a chill, like finger nails on a chalk board.

“I’d rather take an ass kicking than go inside.”

Two flea infested hounds lay on the rotting porch; dripping with ticks. The outer door hung by one rusty hinge, and the screen had long ago been ripped away.

At first glance Ted doesn’t see the body. Just the three children standing in a half circle, all peering downward. But closer inspection reveals a more gruesome sight. The children are standing over the corpse. Then, very much like an E. F. Hutton commercial, every one turned and stared, when hearing footsteps approaching them. Everyone, including the alleged murderer, stared blankly at the new arrival.

“Jesus!” Ted exclaimed. A loud buzzing noise arose from the now, bloating corpse. It turned out to be a swarm of insects blowing the remaining vital juices that had pooled out on to the dusty, plank floor. Ted scooted the children out of the way, asking them to stand out on the porch. He then retrieved a stained sheet from an old worn out, feather tick mattress, in a nearby bedroom. Sun rays streamed through the cracks in the floor, making the tiny particles of dust virtually dance in the glow.

He was about to cover the deceased when a boy, about twelve years old entered. Looking up at Ted with a blank stare, he steps over the eerie, corpse, disappearing into an adjoining room. Only for a second though, then startlingly re-appears carrying a western saddle, slung haphazardly over his left shoulder. Once again he steps over the remains. Ted feels ill. He had seen some horrendous sights on some of the drilling rigs that he had worked on. Some that would make a man’s blood run cold. However, the complacency, of the lad, chilled him to the marrow. Ted popped the stained sheet into the air, spreading it evenly over the now, stiffening body. He then collected his jumbled thoughts, strolling out onto the front porch. It would be a while before the sheriff arrived.

Both Mr. and Mrs. Foster sat on an old church pew that leaned against the wall of the seasoned over hang. Kay had a face that only a mother could love, red and hideous, almost beyond human likeness. Whatever the incident, it had left her a virtual monster in appearance. The women’s lips, curled back in a dog like snarl, revealing snagged, yellow teeth. Her eye lids are stretched beyond capacity, making them misshapen, too exposed. Her hair, fine and thin, hangs over scars covering half her scalp. Leaving only fuzzy, lifeless tuffs, here and there.

At first glance, Ted knew that this woman had suffered greatly. His gaze did not linger upon her face as he politely introduced himself as a newcomer to the Valley, then settled his worried eyes on her husband Bill. Ted noticed that he was strikingly handsome, with a full head of salt and pepper hair.

Somber faced, Mr. Foster looked up at Ted, and shook his hand. Then folding his hands in his lap, the old man dismally settled his gaze on the children playing in the over grown yard. The dispirited, sticky faced babies milled around speaking in low, muffled tones. Their dirty faces, filled with anguish; innocence stolen forever. In the distance, Ted noticed a boy riding horseback.

“Hello folks. I understand things have soured for you all? Someone, well you, Mrs. Foster, can relay to me what went on here today?”

Mrs. Foster, obliged, “Dan… the victim, had gotten into a heated argument with his brother in law, Bill. It started over a child’s rocking chair. Three of the children, Andy, and his two cousins Donna, and Betty were fighting over dibs on the peace of furniture. Andy had it first. Dan went over to the boy, jerking him out of the seat. He then sat Betty down hard onto it.

“Andy, don’t even think about it!” the big man roared, as the little boy started walking towards the chair.

Little Andy looked over his shoulder at his dad, in hopes of some adult guidance.

“Don’t you look at that dumb son of a Bitch? I’m tell n’ ya’, just keep your ass out of that chair!”

Dan was way past drunk, and spoiling for a fight. He had been all day, for that matter. He was resentful of the fact that he was out of work, and homeless. His wife had deserted he and the girls a few months earlier. They had stayed with the Foster’s ever since.

With a flurry of hand gestures, Bill exchanged heated words with Dan. The giant of a man shortened his distance from Bill in a couple of long strides. Grabbing the elderly man around the neck, he jerked him violently to his feet.

“I am going to kill ya,’old man.” His foul whiskey breath, invaded Bill’s nostrils, spraying vile, foamy, venom in to the face of his prey. “I’m a go’ na’ gut ya’ like a fish. You and your n’ have been lord n’ it over my head long enough, that me n’ mine is mooch n’ off Yun’s.”

Hands flaying in the air, feet lifted inches from the floor, Bill tried in vain to free himself from his tormenter. Dan’s face turned into a mask of evil as his eyes glazed over, fading to black, as spittle dripped from his chin, and down his shirt, making his evil snarl all the more gruesome.

Pressure builds in Bill’s head as he prays for divine intervention, while his airway caves in under Dan‘s grip. Faint cries from the children mingle with the ringing in his ears.

Mary Gaines is uprooted when her family moves to a desolate mountain region in Arkansas. After only three days at her new home, Mary’s father is called away to a gruesome murder scene, and she soon discovers the valley holds many dark secrets, but she guards an even darker one—a secret that leaves her clinging to sanity every day of her young life.

The discovery of a gunrunning and drug smuggling operation involving powerful political figures leaves Mary fearing for her life. When a close neighbor is murdered because of his connection to the drug cartel, Mary wonders if she’ll survive in this wild, unfamiliar place. Thankfully, she finds a ray of hope in new student, Darius.

Darius is a pro surfer from California. The two form a quick bond, and Darius invites Mary to accompany him on a trip to Huntington Beach for the Ocean Pacific World Pro surfer’s contest. A getaway is just what she needs … or is it? When she finds herself in the middle of a violent riot, Mary is left even more disillusioned and struggles to fight the darkness inside her.

Marie Himes lives in a small Arkansas town that is rich with mystery and scandal. When not writing, she likes to spend time with her grandchildren and embark on new adventures.