He Moved West with America 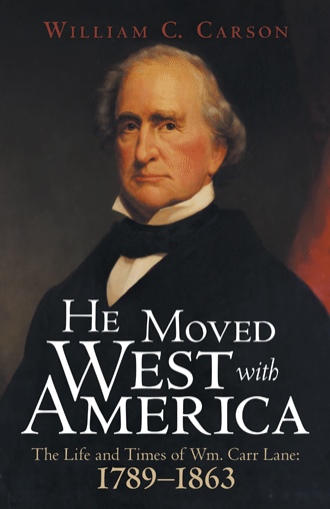 Four days after Lane delivered his third address to the St. Louis aldermen on April 25, 1825, the city was overwhelmed by the arrival of the Marquis de Lafayette. The hero of the Revolution was touring the country and had come up the Mississippi from New Orleans on the steamboat Natchez. It had tied up the night before at the village of Carondelet, five miles below the city.
St. Louis was able to organize an enthusiastic, if not elegant, welcome for the sixty-eight-year-old hero with a unique combination of the crude behavior common in a frontier town and the cultivated style of the prosperous and dominant French. Mary was not in St. Louis to participate in the festivities, but was in Vincennes with her two daughters, where she would reside for much of the next six years.
The city did not have a wharf at the time and only two landings. The Natchez arrived at the Market Street landing at 9:00 AM with over half the population waiting on the levee. The band played Hail to the Chief until the general came ashore followed by his entourage, which included his son, George Washington Lafayette. The crowd surged forward as the mayor read his speech and Lafayette responded, “I have once more the satisfaction to see the descendants of France, and the descendants of my American contemporaries mingle in the blessings of republican institutions, and in a common sentiment of devotion to the confederate union; a union, Sir, so essential, not only to the fate of each member of the confederacy, but also to the general fate of mankind that the least breach of it would be hailed with barbarian joy, by a universal war whoop from European aristocracy and despotism.” His words were as fine as his leadership in the decisive battle at Yorktown, but the crowd was not listening, and the frontier St. Louis took control.
A butcher named Jacob Roth, wearing his usual greasy apron spattered with blood, slid from his horse, rushed through the crowd, and seized the startled general’s hand, “Whooraw for liberty! Old fellow, just give us your hand. How are you!” This assault was particularly galling to the crowd, for Roth was known to steal and butcher cows and then sell the meat back to the real owners. A drunken member of the reception committee intervened, and Lane ushered the general into the waiting barouche.
The barouche and two horses had been provided by Thomas Biddle, brother of Nicholas Biddle, President of the United States Bank. Judge Peck had also loaned two horses. The procession was led by Captain Archibald Gamble’s light horse troop and followed by the crowd from the levee. The general, the mayor accompanied by a Revolutionary War veteran, and Colonel Augeste Chouteau all arrived safely at Chouteau’s elegant mansion.
A band played Auld Lang Syne while the general was introduced – one Creole lady asked if this were his first trip to America. Another who came forward was “Old Eleckzan” who had been with Lafayette during the Revolution. Only after the soldier recounted an event that occurred on the ship carrying them from France did the general remember – there was then combined embracing and weeping.
The rest of the day was occupied by a military review, a special meeting of the Masonic Lodge, and a visit to the general’s old friend, William Clark. At four o’clock, an elegant dinner was served at the Chouteau’s mansion, followed by a ball. The finely dressed ladies and gentlemen of St. Louis danced late into the night, but Lafayette left after dinner to return to the Natchez, which departed early the next morning. The mayor remained until the general was out of sight.
Both the planned and unexpected events of the day illustrated the diffuse character of the city’s population and again showed Lane’s ability to act decisively. Prior to the visit, the aldermen were not sure that they could use city money for the welcome, but hoped the state would provide funds for a grand reception. The capital was in St. Charles, but because there was no building, Governor Bates spent most of the time at his farm located beyond the capital. Lane rode the twenty miles to the farm, only to be turned down flat. Not only would the state not pay, Bates would not come, nor would he be available if Lafayette traveled to St. Charles. The mayor and the aldermen decided to use city funds, but agreed they would repay it if the citizens objected. They did not, and the grand day cost the city thirty-seven dollars.
Less than two weeks elapsed between the time Lane made the futile forty-mile round trip to beseech the governor and the arrival of the Natchez. During that period, he had moved rapidly to organize Lafayette’s reception with minimal funds, protected the general from a crude assault, and hosted him at an elegant dinner and ball. If Lane’s actions related to the festivities demonstrated his ability to take charge and act, the address he delivered in the middle of this period revealed again his grasp of history, governance, and human nature.
He began the message to the aldermen with reminders that they were all there to serve all the people – “let us wash our hands of all party and personal feelings, whether kind or unkind, before entering upon our duties, and act with an eye single to the good of the whole.” He presented a sweeping view of the responsibilities and limitations of government.

Wm. Carr Lane was a man of great courage and intelligence who combined action, vision, and leadership to solve problems during the decades leading up to the Civil War. Elected to mayor of St. Louis in 1823 at just thirty-four, Lane was greatly involved in the expansion of the United States as his brawling frontier town grew into a city trapped in struggles over slavery. There is no question he was a fascinating and important man who lived through a period of major and rapid change in America.

William C. Carson, great-great grandson of Wm. Carr Lane, has written an intriguing biography inspired by letters Lane wrote his wife of forty-five years and the journal he kept while traveling over the Santa Fe Trail and in New Mexico. After beginning with an early history of Lane’s life, Carson details his public persona as he was elected to eight terms as mayor of St. Louis, appointed to another, served in the state legislature, worked as quartermaster general of Missouri, ran for Congress, practiced medicine, traded real estate, started businesses, and raised a family. When he died in St. Louis in 1863, Lane was known as a tireless leader who played a critical role during a tumultuous time in American history.

He Moved West with America shares a captivating history of a political leader who, in his own passionate way, made a great impact on the United States during the pre-Civil War era.

William C. Carson is a great-great grandson of Wm. Carr Lane who learned much about Lane and his family while growing up in St. Louis. He earned an A.B. from Princeton University, an MBA from Stanford University, and served in the United States Air Force as a B-29 and RB-36 navigator from 1951 to 1954. Since 1992, he has lived in Santa Fe and travelled extensively in New Mexico. This is his second book.