The Holocaust: A Riveting Historical Novel 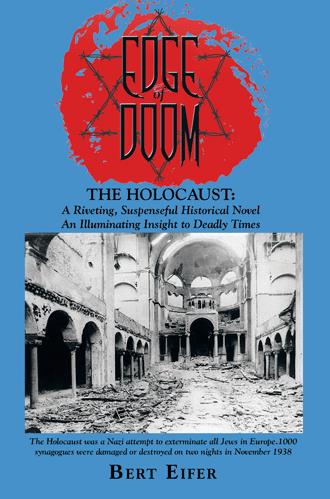 When a rusted canister is dug from a concentration camp after 26 years,
a harrowing human drama begins (on page 1). * The sizzle is unrelenting!
* Into this Nazi era steps David Wolf, an untested young journalist,
knowing he is in peril because he is a Jew * Tragedy within tragedy ––
World War II with 60,000,000 - 80,000,000 killed from 44 countries.
The HOLOCAUST, an attempt by the Nazis to exterminate all European Jews, w accounted for 6,000,000 deaths. * David reports on the Nazi Book
Burning (barely escaping from the Gestapo), and interviews a member
of the Einsatzgruppe –– Nazi troops that killed every and any Jew in
captured territory. * Not only was David cast into a concentration camp,
but his entire family disappears. * Even though he is on the edge of
doom every step of the way, David plots to inform the outside world of
Nazi murder and mayhem. * Nothing in human history has approached
the Nazi period of man’s inhumanity of man! * You, the reader, will
fathom David’s fate!
* No sex * No obscenities * No Gratuitous Violence
EDGE OF DOOM is written for
Middle-School Readers to Retirees
Available also as ebook

A workman bulldozing the rotting remains of a barracks of the former Weimar Concentration Camp, spots a corner of a rusted canister protruding from the dirt. He believes the contents could be revealing information on the murder and mayhem that took place here twenty-one years before.

The shocking revelations create a chain of harrowing incidents revolving around a young Jewish journalist, David Wolf, taking him to the edge of doom in Nazi Germany’s Holocaust. In the end the Holocaust claimed six million Jewish lives––murdered, starved or worked to death.

David has many perilous forays. His family disappears and David ends up in a concentration camp where he risks all on his mission to smuggle information of Nazi’s extermination of Jews out of the camp. David believes the world will react in a wave of vengeance upon the Nazis.

*No Sex *No Obscenities *Historically Accurate

Bert Eifer enlisted in the army artillery from Ohio State University, and then traveled to France, Belgium, Germany, and finally Luxembourg for the Battle of the Bulge. He subsequently returned to Cleveland where he married his childhood sweetheart, Elaine, had two children, and pursued a career in advertising, photography, and writing. Edge of Doom is his second book.