It’s Not Forsythia, It’s for Me 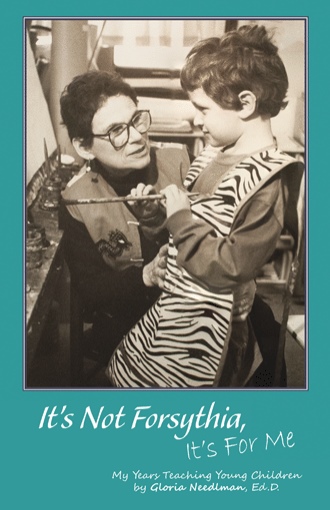 Humor and fun had an important place in our classroom. Since clean-up time is an essential part of every school day it required the help of each of its members. We made it a time for cooperative efforts. Some jobs required children becoming a living conveyor belt as they handled a load of blocks that needed to be shelved. The “workers” lined up from the block cabinet to where the blocks were scattered, and with adult help, spaced themselves close enough to each other to be able to hand a block from child to child until the last child put the block in its correct space in the block cabinet. No one was required to move, instead each child pretended to be cemented in place while the objects on the floor were passed along and the floor cleaned up in no time. We found involvement in the conveyor belt job was usually accompanied by laughter, sometimes by songs.

I was fortunate to have a jib crane in the block area, constructed by my husband, but before it could be operated safely, a child had to pass a Jib Crane test and be licensed. Each personalized license (Made on a 2” x3” card) had a space for a child’s name, and the date saying the bearer of the card had successfully passed a jib crane test. It was stamped with a circular seal. (Good use for my outdated notary seal which made a raised impression on the license making it appeared quite important and official.)

Only a licensed child was allowed to use the jib crane which meant that the bag was to be carefully filled with all its contents inside—nothing sticking out of it and the area first surveyed so that other children were out of the path of the swinging crane. Because of the need for licenses, accidents did not happen—using this machine safely was a serious experience. Over time everyone became licensed. If any one of the safety rules was violated, the forgetting child’s license was revoked for a day. By George, it worked! A former licensed kindergarten child as a 7th-grader stopped by the classroom to show me that he still carried his license with him, it being a bit worse for wear.

Another way that made a clean-up job interesting for youngsters was to create an inclined plane. A long board or heavy cardboard piece was placed with one end in a storage bin or container on the floor, the other end propped up on a large hollow block or a low chair. Children were encouraged to place small objects that were to be picked up on the high end of the plane and watch as they slid down into their final resting spot. Almost every child could be enticed to engage in some aspect of clean-up time making it a positive part of each day.

I’ve talked about our community recycling center within walking distance from our school; a wonderful resource which operated on a barter system. I frequently would drop off a few bags of recycled crushed cans, and return to school with two bags of useful items. There were always items we found uses for: printed envelopes that children used in many ways; containers wonderful for storing things in the room; out of print wallpaper books we added to the art area; to mention only a few of the many recycled items children put to good use in our classroom.

Perhaps the best item from the recycling center was a discarded huge cone, open at both ends that came from the Geophysics Department at the University, part of an actual spaceship. It was too large to fit into my car, and Ken Dunn, the genius who started this early recycling center in the ‘80s, delivered it in his truck to my classroom. (I could have converted a discarded appliance box into a space ship, but having this real cone was perfect.) Children became involved in space travel and explored many possible cooperative ways to play at being astronauts. Along with this playing were, of course, opportunities for learning.

The cone, turned on its side was large enough for two children to sit in side by side. Of course, before anyone went off into space she/he had to be properly attired. An astronaut could only enter once having donned a five-gallon ice cream container discarded from an ice cream shop in the neighborhood-a space helmet. It was perfect once a large area was cut out for a child’s face and its exterior painted by our artists. Wonderful imaginative space play took place in this “spaceship”, and researched books, of course, made up a big part of it. When the cone was no longer needed for going on space adventures, I set it upright and placed a circular strong plastic sheet, also obtained from the recycling center, on the narrower round top and it became a large table surface that housed a variety of things Children today may have less interest in space exploration than they did in my teaching days, but maybe not.

I found some of my most creative curriculum came from scanning newspapers and magazines and choosing items that might spark the interest of children. One such article was about Steve Fawcett, a very unusual millionaire who made several attempts at circumnavigating the earth in a Hot Air Balloon. The flight of the “Solo Spirit” became something that evolved into a huge involvement in my classroom. I shared the newspaper articles with my children about Mr. Fawcett’s flight and they became very excited when I suggested they could create their very own hot air balloon basket.

Of course, we did research to learn the balloon or envelope was 150 feet tall. In order for children to visualize its tremendous size, we went to the large sidewalks in our courtyard and with a yard stick, children counted off 150 feet on the cement.

It's Not Forsythia It's for Me: My Years Teaching Young Children is a book for anyone involved in the lives of young children. Dr. Gloria Needlman, a 34 year, award winning nursery-kindergarten teacher, from the University of Chicago Laboratory Schools, shares insightful, innovative experiences that took place as, over the years, her hundreds of children played and learned about numbers, science, music, art and literature. Read about exposing youngsters to human rights, empathy, and fun cleaning up. Her creative projects are described, through stories and photographs, to motivate and to incorporate, as adults interact with youngsters at home or in schools. These inspired ideas should be reused for many more children than those who called the author, Mrs. Needlman.

One of America’s best preschool teachers, Gloria Needlman, emeritus teacher from the University of Chicago Laboratory Schools, received the Kohl McCormick Early Childhood Teaching Award in 1996, and was a Golden Apple finalist for her outstanding work with young children. A veteran of thirty-six years of teaching, Dr. Needlman (Ed.D.), now retired from the classroom though still actively engaged in teaching, instilled in her hundreds of pupils a love of learning, fostered their curiosity, and exposed them to human rights, diversity, care for our environment and much more. Over fifty of her articles have appeared in educational publications, and she has presented many workshops across the US and Canada. This book is both a personal memoir of her career, and a resource, relating in detail many of the special and innovative teaching activities and techniques with which she inspired her students. Needlman herself rarely thinks in terms of “teaching,” but believes young children learn best through play in a supportive, enriching environment which she created for them in her classrooms. In addition to describing various teaching “curricula,” Needlman also shares her experience with a range of childhood joys and sorrows: loss of loved ones, birthdays, death of classroom pets, troubled children, difficult parents; along with those teachable moments she tells the reader how she dealt with them all, and how she was usually able to help her students. This book captures through words and pictures the work of a very special teacher whose successes and failures need to be shared. Who this book is for:

About the title: On a walk around the campus I stopped to look at some little yellow flowers and said “these are ‘Forsythia’.” Four-year-old Sophia quickly replied, “Oh no, they are for me.”