Book One: The Tower of Fire 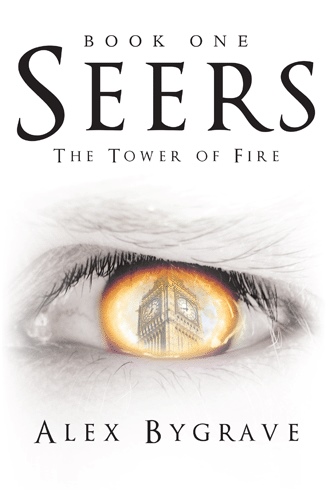 My name is Tony Goldsman. I'm a Seer.

Don't know what that means? Don't worry about it. You'll know soon enough.

In order for you to even remotely understand this story, I'm going to have to set the scene for you. It's a bit complicated. Okay, a lot complicated. But just stick with me and everything will make sense eventually.

Whoever may be reading this, wherever you are, just remember this throughout the whole story: this is me documenting probably the most important piece of history you will ever read, and nobody even remembers it.

What you are about to read is a complete written record of the war for possession of the universe.

Sounds crazy, right? Trust me; it gets crazier. Right now I need to explain to you the concept of the universe. It's nothing like you've ever heard before.

In our universe, we live in a dimension, right? Technically, if you look at it scientifically, we exist in multiple dimensions at once, like the integer dimensions (1D, 2D, 3D, and 4D), but maybe you've also heard of the ten dimensions of reality, a prospect of art. Or even the mathematical dimensions, where you need to find the minimum number of coordinates needed in order to define an area within any space or object. Well, as it all turns out, we are actually in the first dimension. Now, that probably doesn't make sense, considering that the first dimension is generally defined as just a line. But believe me, we are in the first dimension. And rather than ten dimensions of reality, there are eleven. So whoever came up with that wasn't too far off.

Are you with me so far? Good.

Like I said, in the universe, there are eleven dimensions. But, in this case, the dimensions are other worlds. Earth is just one of these worlds; the other ten coexist within Earth, and each other as well. So, wherever you're sitting right now, reading this, you are sitting in the exact same spot in ten other worlds at the exact same time. I hope that makes sense.

Now, the reason you can't see these other dimensions is because there are walls erected between them. These walls aren't physical walls, though; they're more spiritual than anything else. They exist, but they don't exist. Does that make sense? Probably not.

Here's a simpler way of thinking of it: invisible ghost walls that are intangible are the only things standing between these dimensions. There. That's easier, right?

However, even though most people can't see through these walls, there are people who can. There's only one person in each dimension that can see through the walls and into the other ten dimensions.

These people are the Seers. And I, Tony Goldsman, am the Seer from Earth.

Now, I didn't ask for this. It's a whole lot of destiny and becoming-who-you're-meant-to-be crap. I don't know too much about it, even after all this has happened. One of the things I do know about it, however, is that it's genetic. The ability to See is passed on through generations. As to how it originated, well, we'll get to that later. Much later.

But the weird thing is, there can only be one Seer from a certain dimension at a time. Which means, if a Seer has a kid, then they're going to die pretty soon after their child discovers the ability to See. Yeah, it's tragic, but it's a fact. Although I can't explain that one, either. There are a lot of mysteries in the universe, and most of them are a lot more complicated than that one.

Now I'll tell you about the spires. The spires have been around as long as the Seers have been, and, like the Seers, there's one per dimension. The spires are rock formations that are like overgrown stalagmites. They jut out from the ground, and they extend up to ten feet in the air. They end in a point at the top, and they're wide at the base, like a cone. The significance of the spires is that they allow Seers to actually travel in between dimensions. For instance, if I were to go up to the spire on Earth, put my hand against it, and shout the name of another dimension, the spire would transport me into that other dimension, and I would completely, physically be there, in that other dimension. I would not be looking through the walls; I would have shifted through them altogether. That's what we call the process of traveling through the eleven dimensions: shifting. But only Seers can shift. Actually, no, that's wrong. Other people can shift, but only if a Seer is with them.

There's also one last thing you need to know: all the dimensions are drastically different from one another, and not all of them are inhabited by humans.

If you're lost at this point, feel free to take all the time you need right now to go back over all that stuff. Trust me; you're going to need to understand it all.

Within a universe with eleven dimensions, most people cannot see or travel through the invisible divide that separates the numerous worlds. But Tony Goldsman is not most people: he is a Seer for Earth who can see the unseen with help from Seers in other worlds.

As Tony attempts to maintain a normal life as a nerdy high school student while training as a Seer, he accepts his destiny and grows accustomed to balancing the mundane and the astounding. But when Tony witnesses a group of Insectasoids kidnapping Istan Bullion, the famous scientist from the Krangorians, even he is shocked. As an ancient, god-like being reemerges from its prison and forces Tony into a war for possession of the universe, Tony must work with another Seer and humans from his own world in order to protect Earth. But what Tony does not know is that fulfilling his destiny will be more complicated and dangerous than he ever imagined.

In this action-packed fantasy novel, a teenager must rely on his special abilities to battle a nemesis with an evil mission that can only be achieved by unleashing an otherworldly war.

Alex Bygrave is finally an adult but doesn’t quite act like it. His hobbies include making awkward jokes, studying mythology, and watching Netflix. Alex lives in Morgantown, Pennsylvania. This is his first book.