God Is Not a Religion

Why America Is in Decline 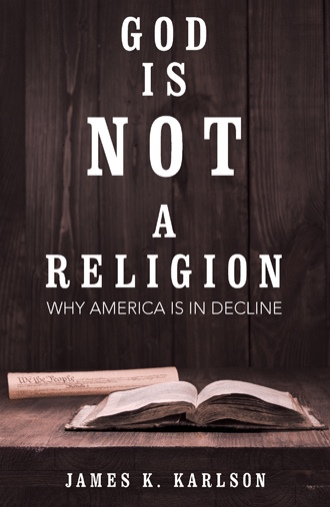 God wants us to worship Him and be united together as we worship Him. I guess the founding fathers agreed on that aspect and that aspect alone when they conceive to form this nation. That is the basis of the first amendment of the constitution. The men also believed that Jesus was the Savior and they all believed He was the Son Of The Most High and therefore agreed on the principal that how you worship Him or the doctrine or belief should not be impaired. Okay, so what about a Jew? Men of God know and understand that it is easier for a Jew to become a follower of the Christ than anyone else because the Jew already accepts Yahweh as the one true God. To become a follower of the Christ the Jew needs only to accept Jesus of Nazareth as the messiah. This is where we get the idea that the Constitution provides each and every American freedom of religion. I believe the founding fathers made an error when they put together the constitution in that they failed to or neglected to define the word religion.

God Is Not a Religion: Why America Is in Decline leads readers to ask the difficult—but necessary—questions. It probes the nature of God, His ties to the American people and their long national experiment, and the characteristics of the broadly based decline cutting across the country’s social, political and cultural institutions. Then it offers a path to follow for returning to the fundamental tenets that originally grounded the country. It suggests that this road to recovery will take the American people to a place in which they reaffirm the sovereignty of God and the accountability of the nation’s governmental servants.

In this insightful diagnosis and prescription author James K. Karlson, a chemist and business executive, brings to bear his analytical and managerial experience, seasoned by his Christian convictions, to fill the pages of God Is Not a Religion with historically informed analysis and biblically grounded guidance. He proposes that the journey of faith beckons both to individuals and to the country. He applies his diagnosis and prescription to the many challenges facing America, such as education, racism, marriage, global climate change, taxes, and guns.

God Is Not a Religion: Why America Is in Decline promises to take seriously history, theology, morality, politics, and personal responsibility as it turns a critical eye, tempered by the Christian faith, to the nation and its people. An examination of the political, moral, and spiritual decline characterized in modern American culture that offers a path for individuals and the nation to follow to return to living “under God.”

James K. Karlson, the son of an immigrant from Sweden, has worked in the chemical industry as a chemist and business executive for four decades. Taking to heart his father’s insight that education is an irrevocable investment in oneself, he has enriched the practice of his faith through study. He lives in Danbury, Connecticut.