In Pursuit of Dreams 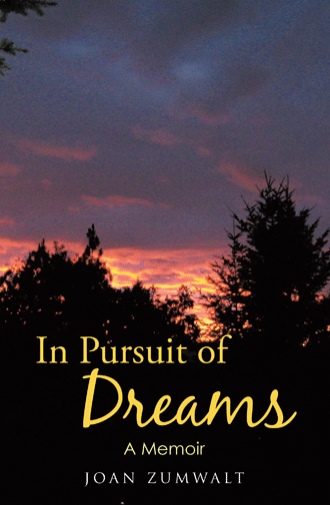 Love and life can come in many different, wondrous forms, and it is our dreams that help shape the contours of that life’s journey. Yet, while often a life can be defined by mistakes, illness, guilt, and blame--or perhaps just by the slow unfolding of its everyday comings and goings--a life can also be made alive by the triumphs of those vivid, powerful moments where our dreams and our lives come together in beautiful, inspiring stories.

In Pursuit of Dreams is an engaging memoir of a woman’s life not focused on the mistakes and the lows but on the dreams and on the lifetime of overcoming the challenges that stood in the way. From compelling, sensitive stories about dogs, cats, horses and other animals that have enriched her life to tales from working in a mental hospital, living in Mexico, teaching, building a house, and shooting a bear in self-defense, author Joan Zumwalt provides a window into her journey of life and love in all its intertwining complexity.

A full life can inspire us to share the dreams and the realities of our journey, with the hope and the promise that those close to us and those who come after can learn from them and be inspired to live a life just as fulfilled. A reader may even be inspired to write his or her own memoir, story by story.

Joan Zumwalt has taught in three Arizona colleges, lived in five states and Mexico and traveled to over fifty countries and forty-six states. She lives in quiet seclusion in southern Oregon with her husband and new best friend, Dood.