The Joy of Poetry and Short Stories

From Love Poems to Grotesque Demons 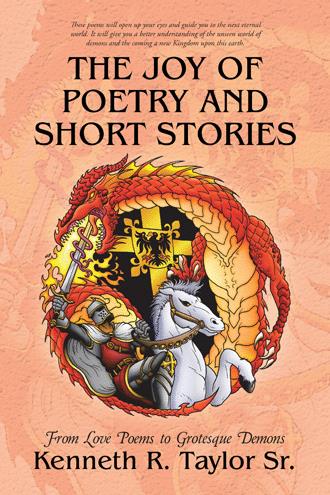 I started writing poems and stories about my life when I was a young man. My poems are very different from what you may read in other poetry books. In this book, there are many poems and short stories. They are very personal tales about my many loves, my many sufferings as a result of them, and my struggle as a child after having pharynx polio, which made me unable to speak correctly. And of course my life was affected when I witnessed my father being burned to death in a motorcycle accident before my eyes at the young age of six.

Some of these poems and stories are very unusual and will take you to a place you have never been before. Some poems and writings are very spiritual. My life started long before I came to this earth, from a planet near the system of the Star Kolob, past the Andromeda galaxy, and beyond. On that planet, a civil war broke out. Many of these writings are about my life in that civil war. I was a one-star general, and I was addicted to power. I almost accepted the position of a four-star general in the rebel forces during that civil war, but I hesitated. I finally chose to fight on the side of the monarch.

This displeased the legitimate sovereign king. I was stripped of my rank and reduced to a corporal. I lost my ability to speak and was sent to a faraway planet in another galaxy, called Earth.

I had to overcome the lust for power and all my other weaknesses. My effeminate feelings raped my mind and caused me many guilt feelings. They camouflaged my real life with delusions and the loss of a verifiable reality due to the overbearing memories of my past lives. These poems reveal how I was able to overcome my obsession with the military and my other weaknesses. Most of my life, I lived in a world of illusion, burdened by visions of female demons that tortured me and dragged me to the dungeons of hell. The poems also show how I battled with these spiritual beings my whole life and how I was able to turn to God for help.

These poems will open up your eyes and guide you to the next eternal world. It will give you a better understanding of the unseen world of demons and the coming of a new kingdom upon this earth.

Author Kenneth R. Taylor Sr. has faced many struggles, both in his current life and in his previous existence lived on a faraway planet. Now he shares reflections upon these battles in the form of poetry and short stories. In his earthly life, at the age of six, he witnessed the horrific death of his father in a motorcycle accident. He then contracted pharynx polio, which left him unable to speak correctly. Prior to coming to earth, Taylor lived in the system of the star Kolob, past the Andromeda Galaxy. There he was a one-star general in the midst of a civil war. His loyalties were torn, and his hesitation in choosing sides led to his banishment to Earth, where only through dreams and visions is he able to understand his purpose. What’s more, while living an earthly life, he has been burdened with visions of female demons who tortured him and dragged him to the dungeons of hell—introducing him to the unseen world of spiritual warfare. He has turned to God for help, struggling to do right and to find love and affection along the way. In this collection of prose and verse, one man reflects on his journey through life not just on this planet but also in a distant galaxy and in the realm of the spirit.

Kenneth R. Taylor Sr. was born in Los Angeles, California, and as a child moved to El Paso, Texas with his family. He experienced tragedies at age 6 with witnessing the death of his father and suffering from pharynx polio. He joined the army at seventeen years old. After leaving the army, nine years later, he went to college and earned his AA and AS degrees. He also earned his BA and MA Degrees in Technical Writing. He is now retired from the Gates Rubber Company, Denver, Colorado after 35 years and Frontier Airlines after 14 years, he is now continuing his career in published writing. He now lives with his wife Sasita Jhum Montathong from Thailand in Denver, Colorado at their home.