God Shall Wipe Away All Tears

A Mother’s Journal of Caregiving, Tragedy, and Hope 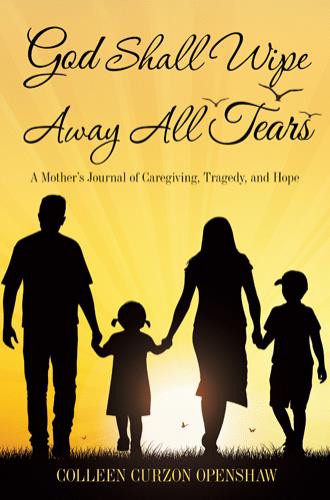 TOO PURE TO STAY

For six and half months, our baby Jonathan was very healthy. He had no sickness whatsoever, except some colic in the early weeks. In looking at him, there was a sense that he was somehow very wise. He seemed to radiate love and wisdom, as if he were an “old spirit.” Several people commented on this.

We enjoyed watching him grow and learn to eat oatmeal cereal with bananas. We had fun watching him laugh at puppies, scoot around on the floor, and say “da-da.” His Dad, Mike, would bounce Jonathan on his knee, sing songs about riding a horse, and play peek-a-boo with him.

I’ll always remember how his dark hair stuck straight up no matter you did. His eyes were a color you couldn’t describe – first a charcoal gray, then gradually getting specks of green and brown. He gained weight well, getting quite chubby by three months of age. We had a special mother-baby bond that comes as I nursed him at my breast. There is really nothing like it - the complete and innocent trust he had in me.

After six months, Jonathan began to have a slight cough, wouldn’t eat well, and seemed lethargic. The doctor was not too concerned, but gave him some medicine and said to bring him back in two weeks. I called the doctor, very concerned after a week, telling him that Jonathan’s color was a little bluish. I somehow felt that he had a life-threatening illness. Jonathan seemed to have difficulty breathing.

The doctor was very alarmed when he saw Jonathan again. He put him in the Provo hospital in an oxygen tent, saying he had viral pneumonia. Under the oxygen, his color became pink again and we were very encouraged. But this lasted only a few days, and then he became increasingly worse. When I held him, I was alarmed at how thin his little arms had become. He put his arms around my neck and clung to me, crying when I had to go home. (In those days, parents were not allowed to stay with their children in the hospital.) I didn’t know it would be the last time I would be able to hold him in my arms.

Soon the doctor said he thought Jonathan had a rare kind of pneumonia, pneumocystis carinii, and he wanted to transfer him to University Hospital in Salt Lake City. I was very afraid. I called my Dad, and he said, “Colleen, have faith!” Afterwards, I knelt by the couch and cried my heart out to God. I told him my fears and concerns. Suddenly a deep peace, like a blanket, came over me. I felt my Heavenly Father’s love and concern for my sadness. In my mind, He explained to me kindly that Jonathan was his son before he was mine, and that whatever happened would be the right thing in his infinite wisdom. From that time forward, I felt great strength to meet what was coming next. I suddenly knew a new definition of faith. It was TRUST. I trusted the powers of heaven to do the eternally best thing for our lives.

After Jonathan was taken in the ambulance the next day to University Hospital, my Dad and Mike gave him a blessing. During the prayer, whereas before we had been so sad and afraid, the room was suddenly filled with a great tangible feeling of love and peace which calmed our hearts. All of us felt it. Again, we knew that God was watching over us in this trying time. We assumed it meant that Jonathan would be cured.

The doctors did a lung biopsy on Jonathan and put him on a respirator in the Intensive Care Unit. They said they would treat him as if he had pneumocystis carinni with a drug called pentamadine, but they weren’t sure it would work. When he cried, there was no sound as the tube was between his vocal cords. We bought him some little rubber animal toys, and his favorite was the giraffe which he could hold onto with his little hand around the neck. We were only allowed to be with him 15 minutes at a time. Then we had to wait in the hall. It was torture! There was no good place to be. To see Jonathan so ill was unbearable. To be away from him was terrible.

The doctors told us they did not expect him to live. It was so frightening to hear these words, yet we believed that there could be a miracle if it was God’s will. The previous two months of his illness were a blur and a nightmare. My life had changed so drastically.

During the two weeks at University Hospital, Jonathan’s heart stopped more than once. After he was revived by electric shock the first time, we could see that his bright shining spirit was still there, looking out through his eyes. The second time, the doctors told us that he was brain dead. Within a few hours he died. The date was May 26, 1969. He was eight and a half months old.

It was death, the real thing – the thing you think will never come into your life on a first-hand basis. I remember his little gray body in the hospital room, lying stiff on the white stretcher. But there was no movement, no light in the eyes, no personality. Jonathan himself was gone! The spontaneous question came to my mind, “Where did he go?” The essence that had once made his body alive – the real little person inside had departed – somewhere. My soul responded with an answer. He was with God in heaven! He was happy and no longer suffering! In the grand scheme of things, all was right. Jonathan had been to pure to stay in this crazy world.

When Colleen and Mike Curzon, a young Mormon couple, lost their first baby at eight months old, it rocked their world. Even worse was to learn that his disease, a rare genetic immune deficiency called hyper-IgM syndrome, could occur in future sons. But the doctors said there was a treatment, so they felt hopeful. Yet twenty-four years later, after having eight more talented children, Colleen and Mike were told that their sixteen-year-old son had terminal cancer.

In God Shall Wipe Away All Tears, author and mother Colleen Curzon Openshaw shares her and her family’s true-life experiences with illness and death.From blindness, cancer, Alzheimer’s and widowhood to happy times, church missions, and new love—her story will pull at your heartstrings and strengthen faith. At once a chronicle of tragic loss and the struggle of parenthood, Colleen’s story contains beautiful and comforting messages from beyond the grave, and four decades of her and her family’s journals, which will offer hope and encouragement to any who have experienced such loss.

Being a caregiver can be difficult and traumatic, but it can also be a blessing. For Colleen, her life as a caretaker and mother is a collage of powerful experiences all wrapped into one true story. Through the tears and smiles, join her in discovering a renewed hope and faith.

“God Shall Wipe Away All Tears is a fascinating look into the life of a courageous woman who suffered unimaginable personal tragedies. Readers will find insight, inspiration and strength from Colleen’s faith-based perspective on confronting difficult life problems. To those who have a loved one with an immunodeficiency, her story will show that you are not alone. Her no-nonsense chronology sheds light on a very rare medical condition.”

“Thank you for your wonderful book! Your insight into life and death, and your terrible experiences from which you have learned patience and understanding, will help us all to become better people.”

It was dusk as my husband and I entered the small cemetery to place flowers on the three graves—Jonathan, our firstborn son who died at eight months from a rare pneumonia; Michael, our violinist son who left us at age sixteen due to pancreatic cancer; and Seth, a loving son who trained hawks and suffered blindness and neurodegeneration after thirty years of immunodeficiency. As the sun set with crimson colors, I placed bright summer flowers on each grave. ‘Help me to do what I should do with my life,’ I said to my sons. It was clear what my path should be. I could not let their lives be lost in vain! I should write their stories of struggle, love, and faith. ‘They are doing their work now in heavenly spheres, and I must do mine while I still have time!’ I said to myself. It all seemed so clear.

This powerful memoir describing Colleen Openshaw’s frequent encounters with illness and death will convey important insights when we experience these unwanted sorrows in our own lives. Losing her parents to cancer and old age, a sister in a car accident, her husband to organ failure and Alzheimer’s, as well as her three precious sons to hyper-IgM syndrome—has given Colleen unusual understanding in facing end-of-life issues. Relying on her faith in God as well as her own grit and determination, her experiences can give us a unique comprehension of how to confront these inevitable trials common to all mankind.

Colleen Scott Curzon Openshaw was born and raised in Salt Lake City, Utah. She has a BGS degree from Brigham Young University with an emphasis in English literature and an MS degree from the University of Phoenix in special education. She and her husband Michael G. Curzon had nine children, three of whom died at various ages due to hyper-IgM syndrome, a genetic immunodeficiency disease. Colleen has lived in California, Georgia, and several other states, but most of her married life was spent in the small town of Salem, Utah. Colleen enjoys doing research on religion, nutrition, and medicine while seeking solutions to her family’s medical problems. Colleen’s husband died in 2008 from complications of cancer. After his death, she finished her education, served a volunteer mission at the Family History Library in Salt Lake City, and worked for the Granite School District in special education. In 2013 Colleen married Gary G. Openshaw. They reside in Salt Lake City and currently volunteer together as ordinance workers in the Mormon Salt Lake Temple. Colleen has six living children—four sons and two daughters—and four granddaughters.

Readers may contact Colleen at her email address (curzons@msn.com) to order books.