Luju and the Curious Wolf Cub 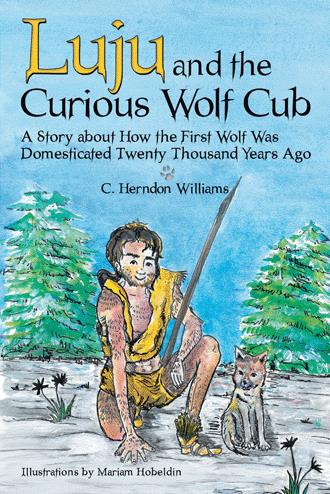 LuJu peered from the mouth of the cave, watching the swirling snow falling on the already deep drifts. A small fire burned near his feet casting little warmth or light. He was waiting anxiously for the return of his father and the other two hunters. They had been gone for two days and it had been snowing heavily the whole time. They had to hunt farther and farther from the cave as the prey animals moved with their forage.

The hunters could return empty-handed or not at all since there were many dangers from large animal predators. The hunters were carrying only with stone-tipped spears. The long hunting trips probably meant that their family would soon have to move to another cave where the game was more abundant. They would be forced to leave the comfortable cave where they had lived for a year and seek a new one. Not so easy, since many of the good caves were already occupied by larger groups of people. But hunger was leaving them no choice.

LuJu would not have noticed the pair of yellow eyes watching him intently. That is because they belonged to Elji, a snow-covered six-months- old wolf cub crouched under a bush only a hundred feet away. Elji was curious about the two-legged animals, especially this young one. Elji’s den was not far away with den and cave located in a valley in what would later be called France. Elji was too young to hunt with the pack, but his sense of smell was already acute. Elji sensed odors like people saw colors. And he had already identified all the smells coming from the cave and its humans.

Twenty thousand years ago the weather was always cold, even when the days of summer were longest. Elji wondered why the two-legged boy had been standing at the mouth of the cave so long when the fire farther back in the cave would have kept him warmer. The boy was hairy and had only a deer skin draped over his shoulders. Elji could smell the anxiety in the boy separately from the other aromas from the cave. Elji had been watching Luju and his family for two weeks now, never showing himself.

Through the snowy late afternoon gloom, LuJu glimpsed moving figures carrying burdens. Elji had already seen and smelled them some minutes before. LuJu recognized his father and saw with relief that he seemed to be all right.  He was carrying the bloody haunch of a giant elk and so were the other two hunters with burdens. Unseen and farther back along the trail was a cave bear following the bloody track left by the three hunters. But Elji had also smelled the bear, although the aroma of the dead elk was much stronger. Wolves did not tangle with bears, but they were often after the same prey.

LuJu shouted into the cave and went to help his father as more family members emerged from the cave. LuJu’s family lived with two other families, each including a father, a mother and one child. LuJu was the youngest at ten years old; there was a girl of twelve, Shna, and Kodi, another boy of fourteen.  In following the animal herds, it seemed that their group had been slowly moving north, to where it was colder. Sometimes the hunters camped for a while with other hunter families. They could not understand each other’s’ speech, but made their intentions known by sign language and drawing in the dirt. The three families in the cave had hunted together for a few years and had a small number of words they used, like “duhk” for danger or look out. In a few years, the older boy and the girl would be looking for mates and LuJu would be with the adult hunters.

The wolf cub, Elji, was eyeing the elk haunches hungrily, but knew enough not to the challenge the hunters with their sharply pointed “sticks.” Elji’s father had warned him about the sticks that could bring down an elk or even a mammoth when hurled or thrust by the two-legged animals. The sticks had sharp rocks somehow fixed at the end and the two-legged animals also used sharp rocks to deftly cut the meat from the bone.

The bear following the blood trail slowed down when he saw the fire-lit cave, but the bear was hungry. The people did not yet see the bear approaching. Elji let out a single “yip” and LuJu looked up and saw the bear skulking closer. The boy yelled “duhk” and the men came running to the mouth of the cave. When they saw the bear, LuJu’s father ran back and returned with a burning torch. He waved this at the bear and all the men shouted and waved their arms. The bear retreated into the gloom, deciding to follow the blood trail in the other direction toward the carcass. They all wondered where the single yip had come from.

Luju and the Curious Wolf Cub is a story about the domestication of the first wolf on his way to becoming a dog about 30,000 years ago during the last Ice Age. It is a story about a young wolf cub Elji who becomes secretly interested in a young boy Luju who lives in a nearby Ice Age cave. For the first time, a wolf becomes friends with a human and they start to have adventures together in hunting and exploring the icy landscape. Luju has a hard time explaining how he has a wolf friend but eventually the wolf cub becomes part of Luju’s family and stays with him.

C. Herndon Williams has researched the prehistoric domestication of wolves on their way to becoming dogs as well as the life that humans (Homo sapiens) led in Ice Age Europe. He is a scientist who seeks to make prehistorical tales realistic. He currently lives in Texas.