A Law from Eden

Solving the Mystery of Original Sin 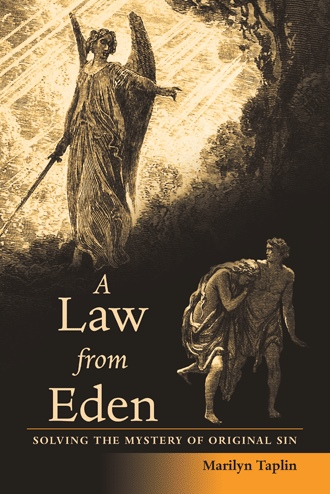 The Sin in Eden

When the peoples of earth do not understand the third chapter of Genesis, the story of Adam and Eve, and the sin that was forbidden for each and every one of us we cannot understand God, goodness, holiness, or the rest of the Bible.

Departing from God and following the ways of Satan is established in Genesis and revisited throughout every story in Scripture. In the Garden there are only two powers available for humans to serve. And today, there are only two powers – God or Satan. This truth is restated in the story of Noah and those in the flood – the population of the earth divided into two groups. If Adam and Eve were placed in the story of Noah, they would not be in the Ark with righteous Noah. They would be in the water. Their sin was sexual for it was a sexually perverse generation in the water. Then the land was filled with violence as our land is today.

If placed in the story of righteous Lot, the first couple would not have been delivered with righteous Lot. Adam and Eve would have been citizens of Sodom and Gomorrah. An understanding of this first sin is critical to the well-being of humankind, for all sorrows ultimately come from the continuation of the forbidden sex that began in Eden.

All unrighteousness: If no one had sinned by this first sin in Eden, the earth would still be an Eden with no need for ten more commandments.

Fornication: The name of the sexual activities of Sodom and Gomorrah, the Gentiles, the mount of Esau, and Babylon.

Wickedness: The opposite of righteousness.

Covetousness: Greed: a major problem within our society today.

Full of envy: Greedy, jealous, full of malice, and resentful.

Murder: All murder comes from the minds of the sexually perverse. If no one had committed that first sin, oral sex, we would still be in a paradise without pain and suffering. When sin ends murder will also end. War will end. This first sin is the root of all that is wrong, all the evils that are committed. It is the root of society’s problems, and until the root of all sin is acknowledged and removed these atrocities will continue. I am not saying all sexually perverse people will commit murder. But all murders come from the minds of those who commit unnatural sexual acts.

Debate: Their main debate is with God, rebellion against God. They debate truth, leading to all the religions and divisions in religions. The lie they fell for is the opposite of truth, therefore, they change truth. The sexually perverse are the unjust. Jesus is just and the unjust debate with and oppose Jesus.

Deceit: Lying, injustice, corruption. All corruption in the church, in the business world, and at every level of government comes from those who have disregarded this first law for all mankind.

Haters of God: Regardless of what they claim; they hate God. To hate God is to break the greatest commandment - to love God.

Proud: This is the pride God hates. God never walks in a gay pride parade. He never attends a same-sex marriage.

Boasters: We have all seen this demonstrated.

Without natural affection: Today, many are given to unnatural affection as demonstrated in the molestation of children, incest, rape, same-sex relationships, pornography, prostitution, the high divorce rate, gangs, physical and verbal abusiveness, etc.

Unmerciful: In the darkness original sin creates those captured by Satan cannot see that they do not care about others. When the Bible says “woe to you,” that does not mean “God will get you.” It means we will have woes: sorry, pain, sickness, injustice, and unhappiness if we as a people choose to sin. The greatest commandment is to love God and one another. But those given to the forbidden sex of Eden are actually showing hate for God, self, and also for others. They have little mercy for their fellow brothers and sisters.

Let us consider how a nation could put an end to every evil on that list. Isn't the answer simply by putting an end to all unnatural sex: Satan’s sex? Wouldn't it be much more advantageous to begin a campaign designed to end this so very popular sin rather than to condone, defend, practice, bless, and spread it as many organizations, churches, and our government are doing? It would be love for our fellow humans to end it.

Many believe America is going in the wrong direction. Jesus shows us how to reverse that direction and bring Eden to earth once again. The end of Satan’s sex will bring heaven to earth.

Both John the Baptist and Jesus said, “Behold, the kingdom of heaven is at hand.” Yet we know that heaven will only come when sin ends. Therefore, humankind needs to know which sin removed us from the first paradise— Eden. In A Law from Eden—Solving the Mystery of Original Sin, author Marilyn Taplin looks to the Bible to show that the true original sin is not pride or the seeking of knowledge about good and evil; rather, she shows that the true original sin is an act of sexual perversion. A misunderstanding of human sexuality has led to this morally wicked society, and biblical research shows how sexual acts originating in ancient pagan societies and now found in contemporary LGBT communities have distorted the way even those professing to be Christians view their own sexuality. Many believe that the world is moving in the wrong direction, and Jesus shows us how to reverse that direction and bring Eden to the earth once again. If those professing to be Christians learn the powerful truth about original sin and end this sexual act, then they will be able to help usher in the heaven on earth promised by God.

Marilyn Taplin was a newlywed in the late 1950’s when openness in the matters of sexual issues was not a part of the social order. A subject not openly discussed as it is today. As a young adult she was determined to think only on positive, good, clean, and wholesome subjects. Consequently she eliminated offensive movies, books and magazines from her life. During the sexual revolution in the 1960’s she was shocked to see the moral landscape of that day. Her first reaction was to ask, what does God say about morality? She shares with you the results of years of biblical research and her understanding of God’s instruction for mankind on the subject of human sexuality.