How and why America is heading to second rate, single payer health care. 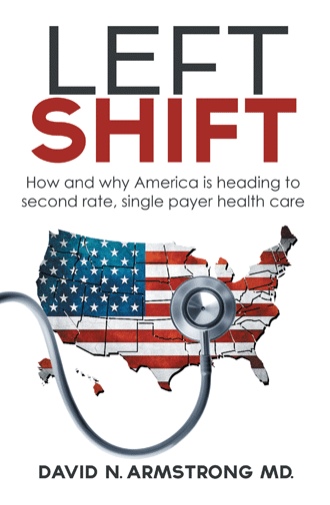 “Universal Coverage”, “Nationalized Healthcare”, “Socialized medicine”. It is the utopia of free medical for all. But how just how good is “socialized medicine”? For half a century, Britain has enjoyed the most comprehensive form of socialized medicine in the western world, time enough for its effectiveness to be evaluated.

This book compares, head to head, Britain’s National Health Service, the icon of socialized medicine, with US medicine, the paradigm of free market healthcare. It compares the number of procedures performed, the cost of performing each procedure and outcomes (death rates) for each. No such comparison has previously been made, and harsh truths emerge.

The cost data provide an enticing argument for nationalized medicine: Healthcare costs in the US are over 3 times those in the UK, an average $9000 for every man woman and child in America compared to a frugal $3000 in Britain. Not unexpectedly, the US boasts twice the number of physicians and twice the hospital beds. Americans undergo twice the number of surgeries, at an average of one and a half times the unit cost.

“Heart attack” ( ischemic heart disease) is the commonest cause of death on both sides of the Atlantic, yet the problem consumes disproportionate resources in the US: An American is 7.5 times more likely to have a coronary angiogram, and 6 times more likely to undergo coronary artery bypass graft surgery, whilst his transatlantic cousin makes do with his nitroglycerin pills. Return on this huge investment comes during an acute myocardial infarction, the critical moment when death may be averted. By this measure the US excels, with a death rate from acute myocardial infarction one half that in Britain.

With violent deaths the US closes the gap rapidly, with twice the suicide rate, 2.5 times the death rate from traffic accidents and 15 times the homicide rate.

The high intensity, fast paced US healthcare can presently afford such luxuries as aggressive intervention for cardiac disease, technology-laden surgical procedures and intensive screening for cancer. Meanwhile Britain’s cash-strapped NHS is over-stretched in keeping up with today’s emergencies, with precious few resources to avert tomorrow’s tragedies. Although a US survival benefit can be demonstrated in the most common fatal diseases, this is only possible at enormous cost, borne, for now, by the health consumer. How long we were prepared to pay this premium previously depended on what the marketplace will bear. In the future healthcare delivery will become subject to political whim, as healthcare delivery drifts inexorably to the left.

As “Obamacare” becomes a reality, health insurers are constrained by new requirements: No lifetime cap; no pre-existing conditions; mandatory contraceptive provisions; outlawed risk-profiling and a surfeit of elderly, sicker individuals. The remaining “big three” insurers, evolved from a whirlwind of mergers and acquisitions, as they cling to each other as they circle the financial drain. As this is written 22 of the 23 Healthcare co-operatives established under Obamacare are insolvent or bankrupt. Healthcare is on a fast track to a Lehman’s Brothers 2.0, when the Healthcare sector will be on life support from the US taxpayer, and the US National Health Service will become a reality: "Free" for all, From Cradle to Grave.

As US healthcare delivery is in flux, an international surgeon dissects and scrutinizes the performance of “socialized medicine” in Britain vs the “free market” healthcare system in the US. The results are sobering. Lacking funds, resources and personnel, socialized medicine results in almost twice the death rate from breast and colon cancer and 50 percent higher mortality from “heart attack” (myocardial infarction).

The high intensity, fast paced US healthcare can presently afford such luxuries as aggressive intervention for cardiac disease, technology-laden surgical procedures and intensive screening for cancer. Meanwhile Britain’s cash-strapped NHS is over-stretched in keeping up with today’s emergencies, with precious few resources to avert tomorrow’s tragedies.

As the Affordable Care Act becomes a reality, US health care delivery takes a sharp turn leftward, following the same trajectory as Britain. Underfunded and overwhelmed, only seven of the original twenty-three health care co-operatives remain open, leaving the US taxpayer with a $1.7 billion dollar bill, and almost one million Americans uninsured, again. Health care is on a fast track to a Lehman Brothers 2.0, when the health care sector will be on life support from the US taxpayer, and a single payer system will emerge, with its second rate outcomes. When this day dawns, a US national health service will surface, just like Britain’s: “Free for all, from cradle to grave”. And accountable to none.

Dr. David Armstrong, a triple boarded surgeon, has operated for over 30 years in Britain’s National Health Service and in the US health care system. He has worked in the Royal Infirmaries of Manchester and Edinburgh in the UK, and Yale University and the Mayo Clinic in the US. Dr. Armstrong has had a front seat to the demise of the health service in Britain, and sees a similar fate for health care in the US.

In addition to a full time surgical practice, Dr. Armstrong has extensive scientific publications researching complex surgical conditions and is the pioneer of a number of innovative surgical devices and medications that are now used around the world. His other contributions to the advancement of the study of medicine include creating the first colorectal fellowship program in the Southeast United States, in Atlanta GA. The program continues to provide training for the best and brightest doctors in America.