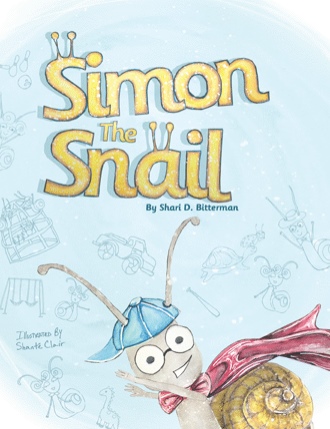 One day Mother Snail announced that soon there would be another,
The girls all hoped that they would have a sister and not a brother.

But when little Simon came along, the family sang out with glee,
Now there would be six glorious snails in the Snail family.

For Simon was so magnificent, a perfect creature it was clear,
The other snails would bow to him whenever he was near.

Simon the snail is born into a family full of love. He has three beautiful sisters who shower him with praise. His father thinks Simon is the most handsome snail in the world, and he brings his mother nothing but joy. However, it soon becomes apparent to everyone that Simon is unlike other young snails, and his mother starts to worry.

The other little snails tease Simon because they think he isn’t smart. He struggles early on with almost everything and faces even more difficulties as he tries to deal with the demands of school. His teacher, Mrs. Slugly, is not very understanding or kind and reacts negatively toward Simon's predicament, which only worries his mother all the more.

Ultimately, his family's show of support and acceptance win out and Simon realizes that he will overcome his struggles, as he is a most extraordinary snail. Simon the snail faces many challenges, but he triumphs in the end because of his mother's encouragement and unconditional love and his own willingness to do his very best.

Shari D. Bitterman has been an elementary school teacher for the New York City Board of Education for over twenty years. She has personally experienced the challenges faced by families living with developmentally disabled children, which encouraged her to create Simon: a character who is able to overcome challenges and inspire those facing similar obstacles.