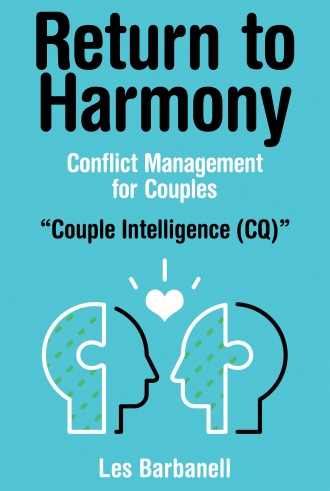 CQ underscores the emotional awareness and interpersonal skills of two interacting individuals. MLM, reciprocity, No-fault conflict and Couplethink are the nucleus of the CQ concept.

CQ acknowledges the presence and significance of the unconscious and its significant contribution to conflict resolution impasses.

CQ attributes a central role to emotions, as does EI, but additionally recognizes the dual nature of negative and positive emotions as tools of engagement.

CQ features the “structure” of the couple system that highlights both the “vertical” and “horizontal” dynamics between two individuals. An example is the power dimension of relating that entails a dominant-submissive (vertical) aspect or a more equally balanced (horizontal) dynamic. Other forms of IQ do not address these elements.

CQ is elevated by the presence of humility and the acceptance of the concept of co-accountability (No-fault) and shared responsibility for reconciliation.

CQ levels are amenable to variation and change, whereas traditional IQ scores are relatively stable over time.

CQ tests an individual partner’s ability to adapt to the other’s strengths and weaknesses, including the attributes of a new partner.

CQ is a composite of an individual’s ability to acquire and apply knowledge and emotional skills to the actions and reactions of a partner, especially within the context of a conflict situation. The Relate-ability scale provides a measure of CQ and assigns a category to the test-taker ranging from significantly below average to above average. Partner CQ is the combined scores of individuals on the Relate-ability scale, which quantifies the combined adaptive abilities of both individuals in a relationship context.

It is uncommon for lawyers and psychologists and other mental health professionals to agree on most subjects regarding the human condition. Eureka! Recent research by the American Association of Lawyers concluded that the #1 cause of divorce in America is poor communication. Psychologists concur with that conclusion, with the qualification that breakups among married and non-married partners alike are the result of ineffective emotional communication. As the divorce rate continues to hover around 40 per cent and is significantly higher for second marriages, progress in this critical aspect of relating, has apparently come to an abrupt halt. Moreover, advances in technology are making this state of affairs even more problematic.

Couples seek counseling because of the “usual suspects” including finances, infidelity, partner abuse, sexual inactivity or disparate child rearing practices. In most, if not all cases, the inability to negotiate these and other matters is attributable to clashing egos, incompatible communication styles and resistance to change.

The return to harmony presents a new approach that entails the replacement of the ubiquitous win-lose mentality with a mutual learning mindset, and a strategy that incorporates effective conflict management skills, less ego involvement and an assortment of tools to counteract the obstacles to mature love.

Les Barbanell is a licensed psychologist practicing in Fort Lee, New Jersey. He has authored several books on personality disorders and multiple articles on subjects that include psychotherapy, group therapy and sports psychology. Dr. Barbanell received his doctoral degree from Columbia University and had post-doctoral training in New York City and New Jersey. He is a member of the New Jersey Psychological Association, a Diplomate of the American Psychotherapy Association and a member of the American Association of Journalists and Authors. Dr. Barbanell’s website is psychologistdynam.com.