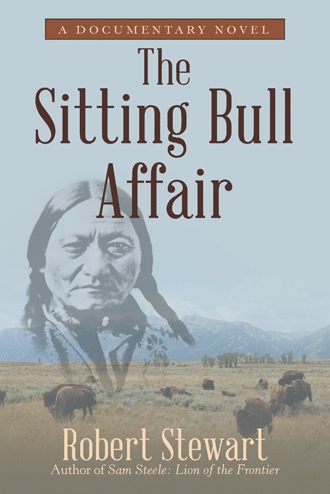 "This is it. He's on his way," Walsh said to Sergeant McCutcheon. The sergeant did not

"We've just heard that he's been at the Big Bend of Milk River and is headed due north,"

They camped that night in a meadow smelling sweetly of sage and wild roses. Louis

Léveillé rode out to scout the countryside at dawn. Walsh was finishing his breakfast tea and

smoking his pipe when the scout returned. He pointed northeast and said: "Dust cloud. Big one,

that way. Hell of a lot of horses.

that led to a field dotted with abandoned campfires. Here Sitting Bull's band had spent the

They rode for several hours up an ever-freshening trail leading toward Snake Creek,

which flowed into the White Mud River. Walsh gave orders to follow it at a walk; he did not

want to press the Sioux into a panicky response. At mid-afternoon. he called a halt in a valley

surrounded by dun-coloured buttes and ordered the tents pitched.

drew up beside his leader.

toward a high flat butte behind them. "Take a look up there."

On the ridge, riding parallel with them at a leisurely pace, were three native horsemen. A

moving apace with them to the front and rear.

"Pay no attention," Walsh said. "Just keep going as if we don't see them." He could not

help thinking, however, of what good targets they must have made for a rifleman up there on the

passed into a grassy field. Then they found themselves riding past a line of newly pitched tepees.

redcoated men and the buckskin-clad Métis.

Walsh trotted ahead to a clear patch of grass and called: "Halt and dismount! We camp

here, boys!" The men busied themselves unsaddling, relieving the pack horses of their burdens,

and pitching their tents.

"Why don't you and the Blackbird go over there and have a chat with those folks?"

Walsh said to Léveillé. The scouts strolled over to the women.

"They're Sans Arcs, Major," said Léveillé. "The No Bows. This is their tribal circle.

Somebody's gone to get their chief."

it. It had taken blood at the Little Bighorn, Walsh would have bet.

He was a tall sensitive-looking man in, Walsh guessed, his mid-thirties. Smiling broadly,

he gave his name as Spotted Eagle and extended his hand to Walsh.

He asked: "Do you know you are in the camp of Sitting Bull?"

"Yes. That is what we have come for. To meet him."

Spotted Eagle laughed. Solomon, who was interpreting, said: "Major, he says you amaze

him. This is the first time a white officer has ever had the nerve to come into Sitting Bull's

More chiefs and headmen walked in from the other tribal circles, exchanging handshakes

and proclaiming their friendship. They were noticeably taller than most Canadian Indian men.

wore two eagle feathers on the back of his head and walked with a slight limp. He plunged into

"I Seedyboo," he said. Walsh shot a warning glance at a couple of young sub-constables

who smirked at the comical pronunciation.

Walsh exchanged a firm handshake with the chief. So this was the great man himself, he

thought; the man whose very name strikes terror in the hearts of American children. Ever since

the Little Bighorn, their mothers had substituted Sitting Bull for the Bogey Man.

Sitting Bull was about forty-five, Walsh guessed, with a chiselled countenance that

nonetheless had something delicate, almost feminine, about it. He had an unusually wide mouth

that now stretched out into a beaming smile. Walsh introduced his men to him.

While the Battle of the Little Bighorn is a legendary episode in American history, what happened to Sitting Bull and his followers afterward is less well known. Ruthlessly harried by US troops, roughly twenty-five hundred Sioux Indians sought refuge in Canada. They crossed at the Cypress Hills near Fort Walsh, a North-West Mounted Police post that was under the command of Major James Walsh.

Faced with the possibility of a full-scale war uniting all the tribes in the area, Walsh laid down the law to Sitting Bull, promising to help the Sioux with food and ammunition strictly for hunting. Walsh was in command of the situation—but only because Sitting Bull recognized him as a true friend who would do everything possible to help the Sioux. Although the Americans wanted the Sioux back and the Canadians wanted them to go back, the Canadian government was bound by its promise to grant refuge to the Indians as long as they obeyed the law.

Narrating actual events and depicting Sitting Bull and his followers, this historical novel describes the war against the Sioux and other tribes in the late nineteenth century.

Robert Stewart, Canadian, was passionate about his country’s history. Born in Northern Ontario, he spent most of his life in Montreal. His earlier book, Sam Steele, Lion of the Frontier, told the story of the North-West Mounted Police and their march across the wilderness of the country to establish law and order and get rid of the American whiskey traders around Fort Whoop-Up.