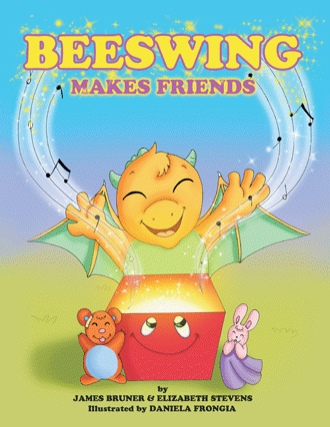 In the Beforetime, long, long ago, there was a little golden dragon named Beeswing.

He could breathe fire when he was angry, but he almost never was.

He had lots of friends and they played together like one big happy family.

He had some very special friends too. There was Fred, his scruffy blue teddy bear, and Blinky Blanky, his little purple security blanket.

And there was Songbox. Songbox was like a treasure box -- only full of songs. Songbox never talked, she sang.

Long, long ago, there was a little golden dragon named Beeswing. He could breathe fire when he was angry, but he almost never was. And, he had the ability to change into other animals. That made his friends laugh and laugh.

One day, the friends played so hard they fell asleep for a very long time. So long, in fact, the time became Now. When they awoke in the middle of a city, Beeswing and his buddies realized they didn’t know anyone. And then, they spied some children who looked lonely, too. That’s when Beeswing applied his special talents to help everyone become friends.

Beeswing Makes Friends, the first in a children’s picture book series, shares an entertaining and enlightening story about the adventures of Beeswing, the little magical golden dragon, and his friends, both human and fantastical.

Daniela Frongia, the illustrator, was born in Cagliari, Italy, and currently lives in London, United Kingdom. She works with authors and publishers from all around the world.