A Countess in Limbo 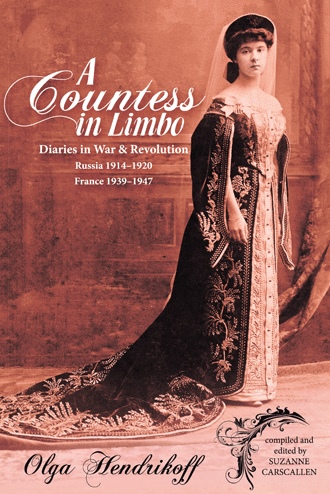 25.11.44 I went through some fairly frightening and unpleasant moments, a real gangster film. I was having tea with Mima Gag., who lives in a large apartment on Cours Albert 1er. The maid had gone out shopping and the butler had retired to the kitchen after bringing the tea. We were sitting calmly, chatting, when we heard a rush of footsteps, and three men burst in front of us as if they came out of a box, pushing the butler, as white as a sheet, in front of them. Two of them, about twenty years old, bareheaded, wearing military-style trench coats, were armed with revolvers, holding one in each hand. The third looked more mysterious, wearing a dark overcoat with the collar up, a fedora pulled down over his eyes, and a pair of dark glasses; he aimed a machine gun at us. One of them then said, “We are with the FFI. My father was killed by the Germans. You collaborated with them. Now you are going to give us your money and your jewellery.”
Mima did not realize what was going on at all and answered very politely, “You are mistaken, gentlemen, I never collaborated with the Germans. Moreover, I never even saw a single one during the Occupation, because I hardly ever go out.”
“Enough discussion,” said the one who appeared to be the leader. “Get up and give us your money. You, Jo, keep those two in line,” he added to the man with the machine gun, meaning me and the butler they had meanwhile thrown onto the sofa where I was sitting. Then he made Mima get up and led her to the door to her bedroom, while the man with the machine gun stayed half-hidden behind a screen, with his gun aimed at me and the butler, repeating, “If you move or cry out, there will be dead bodies in the house.” I did not move or cry out, but I felt my heart beating very hard, and I could not help thinking that it would really be stupid to die like this, after coming unscathed through several wars and revolutions, the Occupation, and the Liberation. At that moment, the doorbell rang. The gangsters in Mima’s bedroom rushed out and asked the butler who it could be. He said he did not know and continued saying it, in spite of the threats and promises to put a bullet into him if he lied.
The leader then ordered Mima to go open the door, recommending that she not cry out or give any warning, pointing a revolver in her back. The visitor was Gleb G., who came by for a cup of tea. He was instantly grabbed and thrown onto a chair in the salon. That was the moment I wanted to laugh. The poor man did not understand what was going on; he saw me sitting well-behaved on the sofa beside the butler, surrounded by armed men. It was not exactly a “five o’clock tea” atmosphere.
From that moment on, our bandits looked like men in a hurry. They told us to go single file into the next room. I was last in line and could feel the barrel of a revolver in my back, a most unpleasant sensation – something I had only seen in American films. They say fear sends your heart to your heels, but I felt my heart beating fast in my throat. We were locked in the little bathroom beside the bedroom and, since there was nowhere to sit except on the toilet and bidet, Mima asked if they could bring us a few chairs, which one of them most kindly did. After locking us in, they shouted at us to stay perfectly quiet and not cry out at the risk of being shot; they would come back in half an hour. We soon realized that the bandits were not going to come back and started inspecting the place. The bathroom only had one small window with frosted glass, so high up that we could not reach it, even by climbing on a chair. We therefore had to wait for the maid to come back, which took more than an hour. Finally, we heard her worried cries, and she ran to let us out when she heard our shouts. The concierge and police were alerted; the concierge had to go use the neighbour’s telephone to call the police, because the telephone wires in the apartment had been cut.

“The diaries reveal details of a remarkable life of a woman born in Imperial Russia who refused to complain about the luxurious life she left behind.”
—CTV National News

“It’s a miraculous tale that takes the readers through revolutions and world wars and chronicles Hendrikoff’s transformation from a wealthy privileged lady in-waiting for the Russian empresses to desperate survivor scavenging for coal in a Nazi-occupied France.” —Calgary Herald

Countess Olga “Lala” Hendrikoff was born into the Russian aristocracy, serving as lady-in-waiting to the empresses and enjoying a life of great privilege. But on the eve of her wedding in 1914 came the first rumors of an impending war—a war that would change her life forever and force her to flee her country as a stateless person with no country to call home.

In A Countess in Limbo, Countess Hendrikoff tells her remarkable true story that includes the loss of her brother in the Russian gulag, her sister-in-law murdered with the Russian Imperial family, and herself being robbed at gunpoint and accused of being a spy by the Nazis. She also speaks of the daily life that continues during wartime: ration cards and food restrictions, the black market, and the struggle just to get by another day. Her gripping story and thoughtful analysis provide a valuable look at life and humanity in the face of war.

Spanning two of the most turbulent times in modern history—World War I in Russia and World War II in Paris—Countess Hendrikoff’s journals demonstrate the uncertainty, horror, and hope of daily life in the midst of turmoil. Her razor-sharp insight, wit, and sense of humor create a fascinating eyewitness account of the Russian Revolution and the occupation and liberation of Paris.

Olga Hendrikoff was born in 1892 in Voronezh, Russia, and attended the famous Smolny Institute. In 1914, she married Count Peter Hendrikoff just as World War I began. In the ensuing years, Hendrikoff lived in Constantinople, Rome, Paris, and Philadelphia. She spent her last twenty years in Calgary. She died in 1987.