Book One: A Flight of Wings 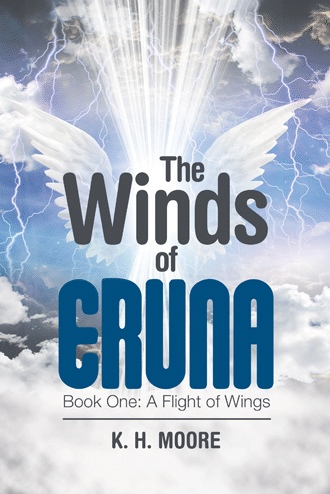 When T’Airiat blew forth a second breath, the Great Wind carried Lights to shine upon Eruna: the Greater Light and two Lesser Lights and multitudes of Smaller Lights to fill the emptiness that surrounded Eruna.

And the third breath of T’Airiat carried a Seed that fell upon Eruna and grew into the First Tree.

And with the fourth breath T’Airiat exhaled, the Great Wind blew over the First Tree and caused the Tree to bear fruit containing many seeds.

Blessed by the sixth breath of T’Airiat the Great Wind, the Trees grew fruit that ripened into creatures, male and female, to live upon Eruna. There were creatures to rule the skies, creatures to swim in the seas, creatures to crawl or walk upon the ground, whose purpose was to tend the blessed Trees of Eruna.

And the eighth breath of T’Airiat caused Eight Eights of Eight Turns to become one Cycle as Eruna circled around the Greater Light.

So it is written in “The Book of Winds.”

Not long after the Great Winds give birth to the land of Eruna, a gifted winglet grows into a girl who is determined to follow her path, whatever that might be. One day after she insists she wants to study magic at a special academy by the cliffs, she leaves her grandfather, Tavat, leader of the clans of the High Plateaus, no choice but to accompany her with his best warriors on a journey across Eruna. Unfortunately, their journey is fraught with danger.

Along the way, Ooloo encounters the High Matriarch’s daughter who is secretly life-mated to a wingman from a family politically opposed to her mother; a wingless ground-dweller who has fled from an accident and left behind his lover and family; and a former Wind Dancer who is wreaking death and destruction in the Wastelands under the bidding of his demon overlord. As the Winds intertwine all of their lives, they must wait to see if their destiny will take root among the giant Trees of Eruna or if an evil presence will unleash a dark plan.

The Winds of Eruna is a story of strength amid adversity as a gifted winglet sets out on a quest to battle the evil that overshadows her land.

K. H. Moore has been a fan of the fantasy/science fiction genre since she was little. She has lived in Italy, Scotland, Saudi Arabia, and various states in the Southeastern United States including an island in the Gulf of Mexico. Moore now resides with her husband in Western North Carolina.