Once Upon a Time

A Guide to Moral Decision Making 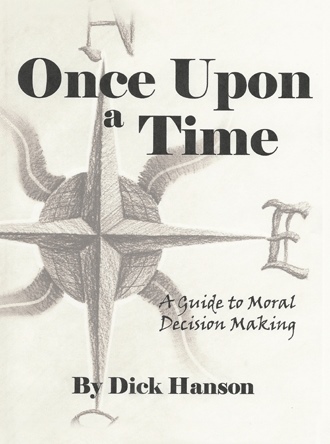 Never before, in the history of America, has there been a more critical time to revisit the idea of making moral decisions. It seems that whatever venue one observes there is a blatant attack on moral values. In athletics, from youth up to the professional arena, in politics at virtually every level, in Hollywood and other areas of entertainment, in business, and even down to the personal level of every day behavior.

The United States of America was a country that was established with a firm position on religion and morality. The declaration of independence provided the foundation for a belief in God and the rights of man. There was the principle that God's laws were supreme to the laws of man. These fundamental beliefs provided the framework for the development of the Constitution and were woven through the tapestry of America's history. In our day it seems the tapestry has been tattered and torn by the introduction of principles that were not consistent to the founding fathers beliefs.

I will endeavor to explain, through a series of short essays, why I believe that moral decision-making is a critical need in our day. I have used stories, fables, poetry, and events to make the point that there is a set of moral rules and a code of conduct that God has introduced to all mankind and if followed will bring us back to the a high standard of moral behavior.

Once upon a time was a phrase that was used in the beginning of fables, fairytales, some poetry, and other literary sources that had a moral concept at the end of each work. There was always a lesson learned that introduced the act of choosing right or wrong.

At the end of each chapter I will give examples of men and women, throughout history, who chose the moral high ground, sometimes at the peril of their lives. Also, I have added some scriptural references that may be helpful.

I will also try to dispel the myth of moral relativity and situational ethics that seems to permeate the thinking and teaching of modern liberalism. These ideas lead people to believe that they can do, and say, and think whatever they feel without any consequences.

I will let you, the reader, to determine for yourself whether there is any truth in the concepts that I share. I invite you to also use the spirit to help you draw conclusions and to incorporate in your life the need, if you so feel, to make moral decisions.

Moral values are under attack. Although the United States of America was established with a firm position on Christian values and morality—on the fundamental belief that God’s laws were supreme—this rich tapestry of American history and values has been tattered and torn by the introduction of principles inconsistent with the Founding Fathers’ beliefs. How can we then overcome this challenge and bring back integrity and honesty into contemporary life?

In Once upon a Time: A Guide to Moral Decision-Making, author Dick Hanson reclaims this lost set of values and provides insight and encouragement for dealing with the problems that beset humankind. Drawing from a variety of sources and offering a sense of the historical background of moral decision-making, Hanson uses a Christian, biblical perspective to articulate a decision-making process that can help show people the way forward with courage and resolve. Replete with examples of people who have made moral decisions, each chapter provides inspirational guidelines and scriptural references that will today assist each person in making moral decisions.

The themes of honesty, integrity, spirituality, and morality run as a thread through the tapestry of history, culminating in the formation of the United States of America and its enduring principles. Despite the moral relativism that permeates our day, God has a set of moral rules and a code of conduct that will bring us back to a high standard of moral behavior—something we so need in our day and time.

Dick Hanson is a convert to the Church of Jesus Christ of Latter-day Saints, and he and his wife, Nancy, are currently serving as missionaries at the Family History Center in Idaho Falls, Idaho. Dick is a professional educator and a veteran, and he has been a K–12 teacher, coach, counselor, and administrator as well as a therapist and director for the Veterans Administration in Provo, Utah.