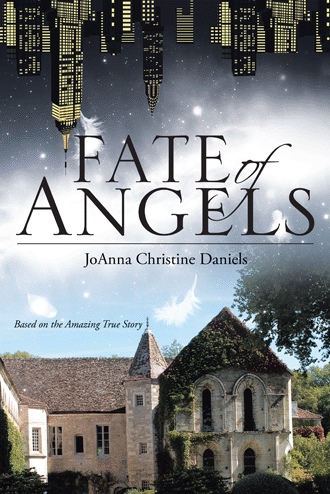 Louise arrived back at the family farm mid-afternoon. A stillness enveloped her. She stood staring at the familiar surroundings a few moments. To the right, a wide, stone building that housed a tractor, farm equipment, tack; to her left, her mother's garden, fruit trees and a patch of spring flowers that were just now blooming, a result of the bulbs she and her sister had planted together the previous fall. In front of her stood the old farmhouse, primitive in its square design of stone and mortar, the adobe peeling away in several places, revealing the true age of her childhood home.

She walked into the glass-enclosed front porch area and stood there, quiet, a few contemplative moments, just listening. For what? At this hour of the day, her papa was most likely not in. Dieu merci! She would put off seeing him for as long as possible.

Then she heard it—the sound of a pan, utensils, her cue that mama was busy cooking something for supper. With her one small bag of belongings, Louise walked through the entryway and into the large country kitchen.

A stocky, buxom woman in a long, woolen dress twirled around as Louise entered the room. "Louise! Ma petite!" My little one, she squealed. Before Louise could even say hello, a myriad of questions spilled forth in her mother’s crisp country French. "Why have you come home? Is anything wrong? How are you, chérie? I'm so happy to see you. Oh, your papa will be pleased." Wiping her hands on the apron, she enfolded her daughter in strong, loving arms. She looked at her again. "You look different. Tell me what's happened."

"Bonjour, maman," Louise finally said. She’s happy to see me now, Louise thought to herself, Wait ‘til she hears what I have to say.

Marie Françoise Colombet stood at least four inches taller than Louise, and the older woman's girth could have accommodated at least two of her daughter. After eleven children, she had stopped trying to maintain her figure. Now, at the age of sixty-one, she didn't really care anymore. After a child was struck by lightening and killed while sleeping in its crib, she accepted its fate and raised the ten remaining children, never failing to have a good meal on the table morning, noon and night. She had mended and sewn clothing, bandaged their wounds, which were many and frequent, and now she was very tired. Her husband had never stopped her from being all things to all people, including himself; in fact, he expected it. She was the perfect farm wife, not giving much thought at all to her own needs, yet never neglecting his.

It had, indeed, been a hard life for Marie Françoise, and deadpan eyes reflected a resigned acceptance of her lot in life. Deep creases along her nose and down-turned mouth attested further to a certain amount of bitterness that had slowly eroded any happiness she may have experienced as a young woman. The long, flowing hair she had once brushed to a dark, lustrous sheen, was pulled back into a severe, tightly-wound knot at the nape of her neck.

Now suddenly, her youngest child was home again. Her day was brightened. They sat down at the table together. Marie Françoise hoped fervently to share a few moments with her daughter before Jacques came in from the fields.

"Now, chérie, tell me why you've come home ... and with your bag. Is everything all right at the monastére?"

"Oui, maman, everything is fine." She longed to tell her about Francis. Maybe she should, before papa arrived.

"There is a problem, Louise.” She saw it on the dear, youthful face that hid nothing. Adamant, Marie Françoise insisted, “Tell me what it is."

Louise hesitated but a moment. There was no point in delaying. "I have left the abbey, mama."

Fixing her blue, determined eyes on her mother, Louise told her why. "I am to be married soon."

Françoise stared at her daughter as though she had heard incorrectly. "Quoi? What are you saying, little one? You have left the convent? Married? Who is this man you are marrying? How did you meet him?" This was all too baffling to Françoise, who had believed her rambunctious daughter safely ensconced in a nunnery.

"He is a wonderful man, mama. You will love him as much as I. In fact, you already know him." It might help to tell her that; might soften the blow.

The best thing to do was to just come out and say it. Her mother's reaction would be a good indication of her father's.

"It is Francis Wagnier." She held her breath.

Her mother thought a moment, her head shaking slowly. "The only Francis Wagnier we know is—“ She looked at her daughter and saw it in her eyes. “Ah, mon Dieu, mon Dieu! You speak of Father Francis?" Louise nodded. "Ah, bon Dieu alors, non!" God almighty, no! "What have you done, child?"

"I love him, maman. He loves me. He will get a dispensation...we will be married."

"Non! non! non!" she railed. "This is not good. He is a priest, sworn to God, Louise!" She jumped up from the table and stood by the window, checking for Jacques. "You must forget him. Go back to the abbey before your father hears of this and behave yourself!"

Louise stood up, her fists clenched by her side, her jaw grinding with frustration. No one would tell her what to do! No one! Not even her mother.

Father Francis is a gifted priest in 1908 France when he meets the young novice, Sister Louise. Despite strict codes of conduct, he falls secretly in love with the impetuous, high-spirited woman. She falls in love with his music. The attraction intensifies . . . leading to an unprecedented scandal . . . vehement opposition from family and clergy.

When her outraged father takes drastic action, Louise fights to be with the priest she loves. A test of wills ensues . . . dreams of an Atlantic crossing, and a bid for freedom in the New World—but can their forbidden love overcome the dictates of the times in which they live?

Years later, it is the beautiful, intrepid Mimi, who risks it all for the man she loves. She drives from California to New York to win the heart of the handsome Broadway actor from Minnesota, George N. Valentine. But like her mother before her, can Mimi’s passion for her lover surmount the obstacles that work to keep them apart?

JoAnna Christine Daniels, author of The Gateway and Eye of the Solstice, is currently writing her next novel and recently completed a screenplay for Fate of Angels. She attended LMU Los Angeles with an English major and studied in Germany and France. She has traveled extensively and speaks four languages. Daniels lives in Littleton, Colorado near her youngest of three sons and enjoys all that the Rocky Mountain state has to offer.