Excuse Me Waiter, but There’s a Flyswatter in My Soup

The Book for Everyone 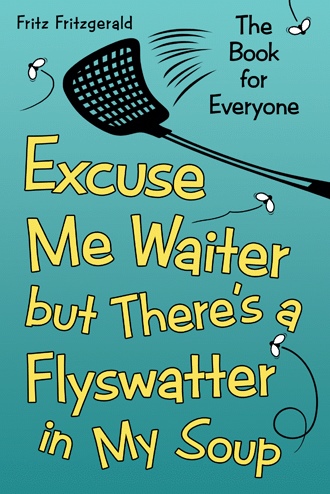 Then brown and orange too.

I should have known that this would happen

But my conscience was too faint

So I guess I’ve learned the hard way

Do not drink the pretty paints.

A chunk of pig’s ear

A piece of his rear

And maybe a sliver of snout.

A hip or a knee

Some lips and belly

And a part of the rump, I don’t doubt.

A portion of tails

And maybe some nails

Coming off of that dirty old hog.

Of the things they’ve put in your hot dog.

Today in school I have biology

Which is the one class that I dread

Because the last time we had dissection day

I was sitting there minding my business

Talking with my good buddy, Tye

When all of a sudden, as I glanced down

Piggy had opened his eyes.

Thinking that it was nothing more than a trick

I got closer so that I could see

Then proving that all of my instincts were wrong

He suddenly winked up at me.

I glanced over at Tye to see if he’d noticed

But he was now busy talking to Jean

So with no one there to support my odd claim

I began doubting just what I had seen.

So I lowered my knife for a cut

Then with a scream I could barely contain

My piglet began to sit up!

I looked up to see if anyone noticed

But they were all busy cutting their own

And just when this day couldn’t be any weirder

The pig asked could he please use my phone.

With my jaw hanging open I handed it over

Not even considering to stall

Because for truth to be told, I was curious

Just to whom would my piglet now call?

As he started to dial, I lowered my head

For a better advantage to hear

But turning his back, he then faced away

So what he was saying was not very clear.

Careful and silent, I bent down again

And was shocked at just what I had heard

I quickly realized I had misjudged the character

Of this pink, little, slippery turd.

Turns out he was calling his lawyer

Because he was angry and willing to fight

Apparently he felt we were breaking the law

And violating his God-given rights.

He whispered some more and hung up the phone

Then handed it back politely

Then lying back in the tray and closing his eyes

Not a word did he say back to me.

Now I was confused and didn’t know what to do

Especially after all that I’d seen

To me that seemed heartless and mean.

So I sat quietly and just simply stared at my pig

Who once more, quite appeared to be dead

And with no one close to state otherwise

I again wondered, had it been in my head.

Just when I thought that it must be a dream

I heard commotion outside in the hall

Government Officials were coming my way

Surely a result of my pig’s desperate call.

Before I could even explain what went down

I was cuffed and hauled right off to jail

And as if I had butchered him into pork-chops

I was denied even the option of bail.

Ten minutes later, in front of the judge

I said “I never even made the first cut”

But I was told that when dealing with animals’ rights

Even intentions to harm were enough.

So a half an hour later, and with ticket in hand

I was finally allowed out of court

One for trying to make shredded pork!

And that brings us here, that was 2 months ago

My Mom wouldn’t write an excusal for me

And I’m scared of going back to the pen.

I look at my frog lying motionless there

As I release my held breath with a sigh

And just when I think the worse is now over

Froggie opens up both of his eyes!

Fritz Fritzgerald loves to laugh at life almost as much as he loves to laugh at himself. In his collection of endearingly humorous poems, Fritzgerald balances important topics like spirituality, love, friendship, honesty, and even mortality with equally significant and relatable issues like eating until your stomach explodes, waking up naked in a department store, and peeing in the snow.

Fritzgerald, who has learned the hard way not to drink pretty paints, writes for a diverse audience that includes those with a full head of small hairs or only one giant hair; people that silently chew their gum or people that loudly gum their chew; and, most importantly, for anyone who is alive and breathing. In laugh-out-loud poems, Fritzgerald shares leftovers advice, reflects on why one should never take a cherry slushy on a roller coaster, and contemplates how to analyze Martian anatomy somewhere over Kansas when normal goes right out the window.

Excuse Me Waiter, but There’s a Flyswatter in My Soup offers a compilation of funny poems that proves, once and for all, that black jellybeans are outcasts.

Fritz Fritzgerald resides with his wife, Dee, and son, Parker, in Topeka, Kansas. This is his first book of humorous poetry.