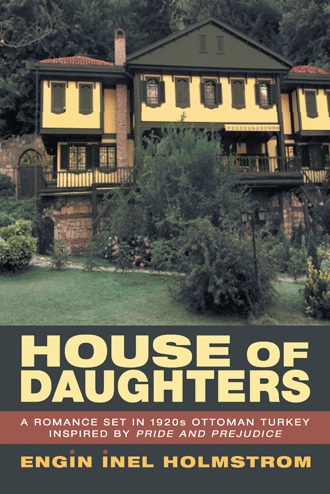 Engin Inel Holmstrom’s second novel, House of Daughters, is a delightful adaptation of Jane Austen’s Pride and Prejudice to 1920s Turkey. The Ottoman Empire is dying. Istanbul is occupied by the British. But all Emin Efendi can think of is marrying off his five daughters to secure their places and fortunes.
While working as a nurse, Emin Efendi’s favorite daughter Perihan meets a dashing, wounded Turkish officer, Major Murat. They’re attracted to each other, but Murat’s pride in his family’s social status prejudices their blossoming love.
In this retelling, Jane Austen’s beloved characters are taken out of the drawing room and their tale is told within the historical context of the Turkish fight for independence, birth of its new nation, and greater opportunities for women. House of Daughters should appeal to Austen’s readers as well as all those who enjoy reading novels with strong female characters.

“HOUSE OF DAUGHTERS is a thrilling blend of adventure, romance, and the personal courage of men and women, during the birth of the Turkish Republic of the 1920s. Exploring the British and Turkish conflict in Anatolia and written like a romantic fable with a dark side, the novel tells of high romance, honor, betrayal, and family saga, in a beautiful mash-up of classic and modern literature. Taking its framing story from Jane Austen’s PRIDE AND PREJUDICE, Engin Inel Holmstrom has given Austen’s tale a modern twist with scenes of soccer matches, gun-running, cross-cultural secrets, and nationalistic fervor in a story of new beginnings, old traditions, and the rise of the new Turkish state. A sweet delight of hushed promises undermined by the demands of family, friends, country and gender, HOUSE OF DAUGHTERS is a hybrid story drawn through the eighteenth and twentieth centuries best understood in the twenty-first century. Following her debut novel LOVESWEPT, Holmstrom’s second novel uncovers a vital history of European struggle for identity, unity, and self-determination. A proud story of unchanging human desire, conflict, and fresh hope.”
—Matt Fullerty, Author of THE KNIGHT OF NEW ORLEANS and
THE MURDERESS AND THE HANGMAN

Engin Inel Holmstrom was born and raised in Istanbul, Turkey. She has M.A. and Ph.D. degrees from Duke University.
Sociologist, turned painter, turned author, House of Daughters is her second novel. Her first novel, Loveswept, a romance between a Turkish girl and an English officer, is available online from Amazon and Barnes&Noble.