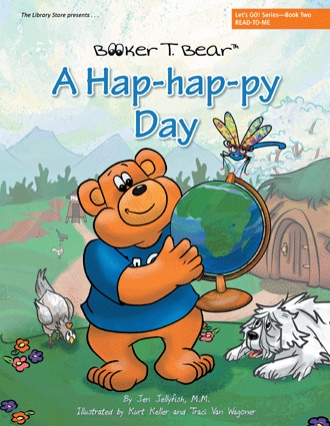 Booker was lazily spinning his globe while Magpie was chewing on a sneaker’s big toe.

Dahlya said as she laughed, “I can spin like that!” She spun on her toes to show Booker how fast.

While globe-spinning and toe-spinning are fun ways to play, Booker yawned and said, “It’s a VERY boring day.”

“Just pick any sticky on your globe and let’s GO!”

With a very wide grin, Booker BURST with excitement into the bear den. “Grandpop! Grandmop! Guess where Dahlya and I are going? It’s the second-largest CON-TI-NENT and far away from where it’s snowing.”

They opened their eyes to a lush mountain slope, and a village of 30 . . . led by King Moyo. Beating hard on his chest he gave a “RRRAA-haa!” warning. Booker held up his binoculars and explained, “We’re just exploring.”

Suddenly a baby gorilla swung in. She gave Booker and Dahlya her very best grin.

Amara swung onto Moyo’s massive black shoulders, and stuck her feet in his ears, as if his ears were fuzzy loafers! “Ah Poppie,” she pleaded now covering his eyes, “PLEEEEEASE let our guests stay! They’re such a SUR-PRIS-ING surprise!”

Moyo lumbered slowly to his throne above his cave. There he studied the guests with a steely black gaze.

Had Amara’s invitation and AN-TICS saved the day? 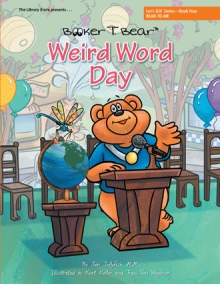 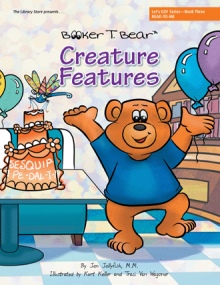 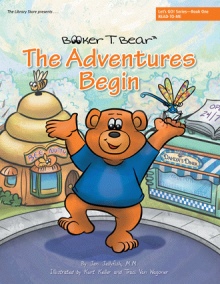 While it’s great fun sipping Juneberry swirl punch and watching bright stickies wave from a spinning globe, Booker T. Bear and his best friend, Dahlya Dragonfly, quickly become bored. Booker suggests they travel to see the Cubs play, but Dahlya doesn’t agree. She reminds Booker that he “is” a cub and he’s seen lots of ballgames. She insists on an exotic adventure.

In this second adventurous book, Booker puts on his Jet-Away jacket and says the magic verse that transports them to a spectacular location far across the globe: a tropical mountain rainforest. They open their eyes to a village of beasts led by a powerfully proud and commanding king—until his cute and infectiously funny young daughter swings in.

Amara is ready for a jungle party in honor of their two guests, Booker and Dahlya. But will her silly antics and pleading to her “Poppie” save the day? Will the mighty King Moyo welcome their guests to stay and play?

Jen and her husband have a Marine veteran son, a creative daughter,
and pets: dogs, cats, aquatic frogs, and fish. They live in the Midwest,
surrounded by fields of corn, pumpkins, soybeans, and . . . dragonflies!

Jen is consumed with the joy of reading, writing, rhyming, and playing with graphic design. She
especially enjoyed creating the colorful template of Dahlya Dragonfly for the illustrators’ print design.
Like Dahlya, Jen LOVES words; her favorite game is Scrabble. She also loves film, theater, creative cooking, and travel adventures. She has a deep appreciation and respect for all-things-creative and for nature.

Jen Jellyfish, M.M. would love to hear from you! jenjellyfish@BookerTBear.com