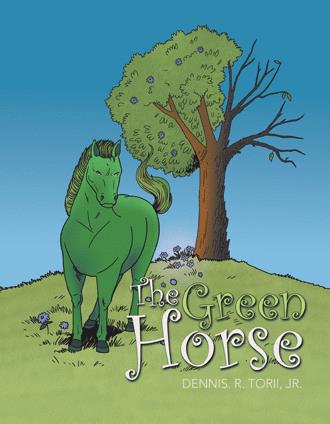 The land of the kingdom was beautiful and had many different animals but some of the horses there had magical powers.  There were different colored horses that lived in the kingdom that were known to have special powers except for one, whose power remained a mystery.  Some thought that the horse had no power at all.  This was the Green Horse and it roamed throughout the kingdom.

In a faraway magical land filled with horses of different colors and powers, Princess Gabriella waits to marry the man of her dreams. In order for someone to marry her, they must not only be good and strong, but also must uncover the mysterious power of the Green Horse, a secret known only by the king.

Nicholas is determined to marry Gabriella. While studying the Green Horse as it roams through the kingdom, he soon learns that the princess has been cursed by an evil sorceress. Now Nicholas must race against time to solve the mystery of the Green Horse and save the princess—before it is too late!

In this enchanted children’s tale, a young suitor who wishes to marry a beautiful princess must rely on a magical horse’s special power to rescue her from a frightening fate.

Dennis. R. Torii, Jr. is a well-traveled army veteran who has enjoyed a diverse career working as a patented inventor for the government and within various industries that include restaurants, security, and finance. He currently resides in St. Cloud, Florida. The Green Horse is his first children’s book.