101 Public Addresses That Shaped the Nation’s History and Culture 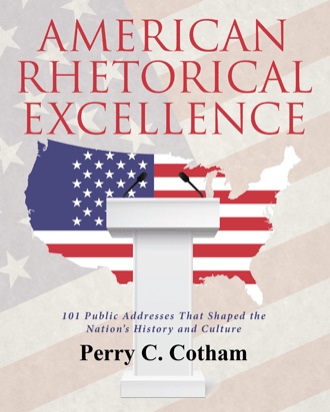 AMERICAN RHETORICAL EXCELLENCE
*The most complete and up-to-date single volume on American rhetoric and oratory.
*Presents names, dates, and occasions for literally hundreds upon hundreds of American speakers and audiences.
*Contains essays on one hundred and one of America's most important public addresses.
*Offers a practical application from each of the one hundred and one top addresses for today's students and speakers for almost all public speaking occasions.
*Ranks the top ten public addresses in U. S. history.
*Discusses written rhetoric as well as spoken (oratorical) rhetoric.
*Discusses the "dark side" of American rhetorical practice, especially demagoguery.
*Acknowledges all classifications of American oratory from the earliest colonial days through the coming of the electronic era.
*Discusses the meaning of rhetoric and how its connotation has changed in modern times from its classical meaning.

American Rhetorical Excellence is the most complete and up-to-date single volume on American rhetoric and oratory. In a readable and interesting style, Dr. Cotham explains what makes a speech great and enduring, and he dares to list and rank the top ten public addresses in American history. Altogether, 101 famous public addresses are discussed in brief essays, and Dr. Cotham offers insights into both the context and practical application of these important addresses. A wide range of other topics are discussed, including American political speaking, presidential debating, campaign speaking, famous pieces of written rhetoric, and American demagoguery.

Although choosing from the veritable pantheon of American speakers and speeches is a difficult and even contentious challenge, American Rhetorical Excellence will equally challenge students of history, political science, and communication to think deeply about the fascinating ways in which American rhetoric has shaped the politics, culture, religion, and reformation of the United States.

Perry C. Cotham is Professor and Senior Lecturer in Communication Studies at Middle Tennessee State University. He earned both the M. A. and Ph. D. in Speech Communication, with a minor in U. S. History, from Detroit’s Wayne State University. His doctoral dissertation focused on the rhetoric of the New Deal and World War II era.
Dr. Cotham has completed post-doctoral studies in religion at Vanderbilt University and in history, political science, and psychology at Middle Tennessee State. He has served as both full-time and adjunct professor in rhetoric and public address, history and political science, and philosophy and ethics at several colleges and universities, especially in the Nashville area: Lipscomb, Belmont, Nashville State, Tennessee State, and MTSU.
Cotham has written some twenty published books and many articles in the fields of history and political science, worldviews and religion, philosophy and ethics, and rhetoric and public address. His study of the Tennessee labor movement won the prestigious 1995 “Best Book” award from the Tennessee Historical Society and Tennessee Library Association. His two most recent books in the field of public speaking are: From Pilgrim Pulpit to the Electronic Era: The Varieties of American Religious Communication (Westbow Press, 2014) and In Search of Rhetorical Excellence (BlueDoor Publishing, 2015).
Cotham and wife, Glenda, enjoy three children and a number of grandchildren. He has an avid interest in all kinds of collegiate and professional sports and his hobbies include hiking and tennis.