Barker Steel and the People Who Made It Work

by Robert B. Brack 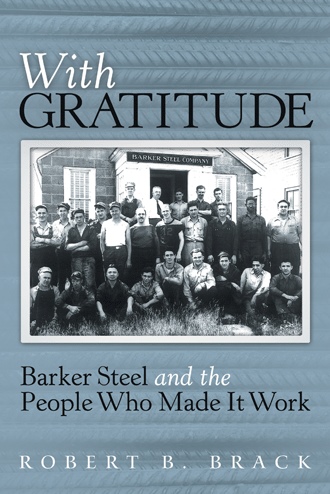 We entered 1997 with momentum, ready to turn the corner. Everything was in place. We had a strong backlog and an experienced team of detailers working with the most advanced CAD computer systems. Shop capacity with the latest in equipment and software systems was geared to handle the demand. The experienced sales and estimating group had sharpened their skills in bidding and closing work, and our tractor and trailer fleet gave us great flexibility in servicing the projects. We were penetrating the New York/ New Jersey markets with reliable on-time deliveries and were developing and strengthening customer relationships at all levels in the contractors’ operations.
And Boston’s Central Artery Project was in full swing. In early 1997 we bid two major jobs that were parts of the Central Artery overhaul.
The first was on January 7: Contract CO9A4, the interchange at I-93/ I -90, where I-93 in the north-south direction meets the Mass Pike. This project was really five major projects combined into one massive interchange. It consisted of 5,600 feet of surface roads, 3,700 feet of boat sections (open U- shaped inverts and walls), 3,000 feet of tunnel sections and 10,000 feet of viaducts. The tunnel construction included cut-and-covered tunnels as well as the jacking of four ramp tunnels underneath the active railroad tracks leading to South Station in the easterly direction.
The estimating of the reinforcing bars, accessories, standees and couplers for this project was the most difficult estimating of all the Central Artery projects that we chose to pursue. The sheer number of components in a job of this scope presented a challenge, and the couplers were unusually cumbersome to price out because the contractors wanted prices on varying coupler systems with different products. Also, the bid for this project included a number of alternates, that is, requests for an additional component or method of construction in the bid package, which further complicated the bid process. With four estimators working over a period of at least four weeks, we were under constant pressure. The architectural and structural engineers issued addenda to clarify pre-bid questions of contractors, and the addenda not only impacted the reinforcing-bar estimate but changed the scope of the project. …
One of the largest and most complicated interchanges in the Northeast, C09A4 was in construction for over four years starting in the late-summer of 1997. One of the challenges of the project was to have uninterrupted train service into South Station despite the underground tunnel being constructed perpendicular to the tracks. This was accomplished by freezing 20 feet of the ground under the tracks while construction was under way, allowing excavation to take place without disturbing the train service. Interbeton, one of the joint-venture partners, managed this by freezing the ground through a chemical-injection process. However, this method of construction did not allow the routine construction of a concrete tunnel. The solution was to cast the four concrete tunnels outside of the excavation under the railroad tracks. Then the casted ramp tunnels, in sections 40 feet high and over 200 feet long, were placed on large cables which allowed them to be jacked into place down underneath the tracks. This was the first project of its kind in this country.

After graduating from college in 1960 with a degree in civil engineering, he went to work at the family business. But after a few years, he left to pursue his dream of teaching math and science.

He’d return to a more challenging role at the company about a year later. At the time, the firm had one location and was barely profitable with less than $1 million in sales and twenty-eight employees.

By the time this story ends in 2007, however, Barker Steel was one of the largest independent rebar fabricators in North America with twelve locations throughout New England, New York, New Jersey, and Pennsylvania, generating in some years more than $200 million in sales and employing more than five hundred people.

Learn valuable business lessons gleaned through four generations of a closely-held, family business, and discover how Brack, his family, and their teams built a successful and respected company in With Gratitude.

Robert B. Brack was Barker Steel’s chief executive for more than twenty-eight years, leading the company as sales increased more than tenfold during a period of dynamic growth. A longtime active member of the Concrete Reinforcing Steel Institute, he served as chairman of the board in 1990 and 1991. In 2012, he received the institute’s first Distinguished Service Award. He is a graduate of the University of Massachusetts at Amherst with a degree in civil engineering.