Causes, Agents, Explanations, and Free Will 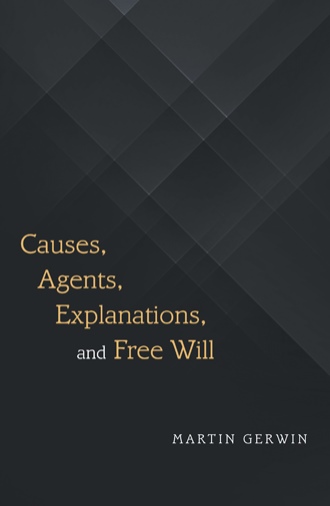 Martin Gerwin aims to contribute to the discussion of three long-standing issues in philosophy: the problem of free will, the nature of causality, and the canons of scientific explanation. These themes are tightly connected, in this discussion, by the fact that he proposes to define causality in terms of logically primitive concepts related to agency. This may be seen as the extension of a strain in philosophical thinking that can be traced back to Locke, and is represented in twentieth-century philosophy by Georg Henrik von Wright and others. Essentially, Gerwin maintains that Locke was on the right track, and the criticisms of Hume and other regularity theorists can be answered.
The argument contains a number of elements that go beyond what is to be found in the existing literature:
(1) Gerwin attempts to define our significant causal concepts in terms of a small set of elementary ideas related to agency. The set is boiled down to three: (a) efficacy, or making something happen; (b) a modal term ‘can’, and (c) the idea of doing one thing by doing another. In the spirit of classical empiricism, these logically primitive concepts are shown to be grounded in common experience – not by being copied from sensory impressions, as Hume would have insisted, but by being unequivocally instantiated in human experience at a very early stage of life.
(2) He proposes a minimal, stripped-down sense of ‘agent’ that can be applied to subhuman creatures, and even inanimate things, as well as human beings. Other philosophers have hinted at such an idea; but none, so far, has applied it in a systematic way. Gerwin maintains that we directly observe our own efficacy; the idea there are other, non-human agents possessed of efficacy then gets built into the framework of theory with which our perceptions of things around us is loaded.
(3) He outlines the primitive basis of a formal tensed modal logic to articulate the meaning of the ‘can’ of agency. The modal term that he takes as basic is the rather artificial expression ‘It is possible to A at t that p’, where A is an agent and t an instant or interval of time. This is then used to define the causal modalities. One forms the hypothesis that some things are impossible for any agent in nature: this gives us the concept of the causally impossible. A law of nature can then be seen as a universal generalization to which it is causally impossible to bring about an exception.
(4) Gerwin offers an account of explanation that acknowledges four different types or schemata of explanation, already set out in the literature; he argues that these cannot usefully be regarded as species of a single genus. What is common to all four schemata, according to Gerwin, is that the explanans is causally prior to the explanandum. Causal priority is an irreflexive and asymmetrical relation that holds between a cause and its effect in a given set of background conditions; it is explicated by reference to the experience of doing one thing by doing another. The result is a very straightforward solution to the philosophical problem known as “the asymmetries of explanation”.
(5) Gerwin distinguishes between two ways in which a process can be viewed as “random”: he speaks of “superficially random” and “fundamentally random” processes. A fundamentally random process, such as radioactive decay, is (to the best of our knowledge) governed only by probabilistic laws; a superficially random process, such as operant conditioning, may or may not be the result of randomized initial conditions producing effects in accordance with laws of a deterministic character. This has a bearing on the different styles of explanation.
(6) Finally, a distinction is drawn between three types of causal connection, to be applied to the choices of rational agents, events subject to deterministic laws, and events subject only to statistical or probabilistic laws. The first is to be explicated in terms of counterfactual conditionals, the second and third in terms of causally necessary strict conditionals. What then emerges is a position on the free will problem that could be termed “soft indeterminism”. Given soft indeterminism, it is possible to entertain a robust form of libertarianism. Libertarianism faces challenges from three directions: (1) the argument from (hard) determinism, (2) the alternative offered by compatibilism or soft determinism, and (3) the claim that if free choices and free acts are not causally determined, they must be random occurrences, happening without rhyme or reason, and not fit to be the basis of assigning moral responsibility. Since causality has been defined in terms of agency, it follows that having the possibility (agency sense) of acting otherwise entails that it must have been causally possible at the time for the agent to act otherwise, and (2) is ruled out. The reply to (3) is that free acts and choices are subject to causation in three different ways: (a) they may be caused in the rational-agency sense noted by Collingwood; (b) they may be subject to conditions that are causally necessary, though not sufficient; (c) they may be caused by prior events and conditions in accordance with laws of a probabilistic sort. Twentieth-century physics portrays the physical world at the level of quanta and elementary particles as a realm governed only by laws of the probabilistic kind, but this is not enough to secure the possibility of human free will. It would require the discovery that some processes in the brain and nervous system are such that very small inputs of energy – small enough to be subject to quantum uncertainty – rapidly produce large-scale effects. There is reason to speculate that this is more likely than not; but the reply to (1) will depend upon future discoveries in neuroscience.
Belief in determinism led some philosophers to conclude that human free will is an illusion. Twentieth-century physics has shown that in fact it was determinism that was an illusion. It will now be up to twenty-first century neuroscience to settle the question of free will.

Many have thought that if everything is caused, human free will must be an illusion. This kind of determinism, however, is seemingly antithetical to our lived experience of the world.

In Causes, Agents, Explanations, and Free Will, philosopher Martin Gerwin argues that there is no reason to doubt that we have free will – rather, the illusion is that everything is caused in the same deterministic way. Our very idea of cause and effect is rooted in our experience of being agents who make things happen. But from this experience we derive not a single, unified idea of causation, but an idea with different variants.

Gerwin traces the evolution of this “agency” view of causality in Western philosophy over the past three centuries. He explores its relation to the canons of scientific explanation and the findings of quantum mechanics. He also offers a brief formal development of a tensed modal logic that serves to articulate the distinctive sense of “I can” stemming from the experience of agency. The result is a fresh, innovative defence of the possibility of free will.

Martin Gerwin was born in England in 1940 and moved to Canada at the age of eleven. He holds a B.A. (Honors) degree from Queen’s University at Kingston, Ontario, and earned his Master’s and doctoral degrees at Princeton University. He was a member of the Department of Philosophy at the University of Manitoba from 1965 until his retirement in 2003. He and his wife Judith Rutledge live in Toronto, Canada.