A Theory of Nothing

How Is the Finite Reality Created from the Infinite? 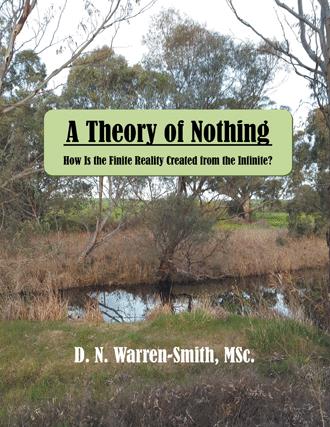 I suggest using the preview as it appears at the start of the book, (approximately one page.) the table of contents that needs to be generated when the layout of the book is finalised and the following part of chapter 2:

Chapter 2. The progression of life

We start life at conception, emerge into the world as tiny babies and gradually have to learn how to interpret the experience we receive in the reality system that we find ourselves in. We soon discover that we are individual animated objects living in a 3-dimensional, solid objective universe. A universe where we cannot hide or escape from ever present dangers. The universe is all around us and we have to cope as best we can with whatever comes our way. The hard knocks that we receive as we progress through our school and, for some, our university years and then through our working years, reinforces the belief that the universe is inflexible, hard and demanding.

As time passes we find that life has delivered us some unexpected experiences that make us think about what life means. As I was reaching manhood and becoming independent of my parents, I realised that some of my older relatives were dying and diminishing in number. In due course my parents died and later my wife died from a cancer of the brain.

One day I arrived home to find that my wife had disappeared. She had been exercising and had lost consciousness. When she came too she had gone across the road and the neighbour had taken her to the hospital. When the neighbour saw that I had returned home she came across and told me what had happened. This started a long period of degenerating health for my wife and desperate attempts to find help for her. The hoped for help was not forthcoming and eventually she was gone.

The effect of the tumour in her brain was to create so-called clonic effects, uncontrollable shaking or spasms on her leg on the right hand side of her body. Her leg would shake uncontrollably making walking difficult. Later after an operation on her brain to confirm the nature of the problem she became completely paralysed on the right hand side of her body. The surgeon had removed brain tissue whilst attempting to remove the cancerous tissue. Before the operation he said that he was not going to attempt to remove tissue but having seen it growing in her brain he must have thought a try would be of some value but it actually resulted in the onset of the paralysis as was expected.

Following this situation I took up reading about neuroscience and it soon became obvious that the clonic effects originated in her brain and not in her leg on the right hand side of her body. Reading further about neuroscience showed that all the controllable muscles in our bodies are controlled directly by the brain, through the spinal cord. Not only that but all sensation that we experience also takes place in our brains. The experience had shown me that every scrap of experience that we become aware of takes place in our minds constructed from the 100 billion or so neurons in our brains. This completely changed my conception of reality as I will explain as the book progresses. These events prompted me as nothing else could to enquire more deeply about my experience as a human being. I found that I needed to question the most basic assumptions that we hold about the reality system that we normally take completely for granted.

From the day we are born, life is teaching us lessons. Whether it is how we navigate our physical environment or our socio-cultural surround, we are constantly trying to make sense of our reality by listening to these life lessons. Yet while many of life’s lessons reinforce our reality, every so often life’s lessons present us with a curious idea—that everything out there, our reality, may not be as “real” as it seems.

A Theory of Nothing: How Is the Finite Reality Created from the Infinite? chronicles one man’s lifelong journey to develop life’s lessons into a concept of reality that challenges our preconceived notions of objectivity. Although we tend to think of the world around us and our reality as being a shared, objective world in which we live, author D. N. Warren-Smith furthers the philosophical argument that it is really our subjective perceptions that shape and even make the world around us. With compelling logical arguments and descriptions of personal experience, he shows that our most basic assumptions about the reality of our existence in fact keep the true nature of reality hidden from us.

Once we realise that there is no way to conclusively prove that we actually exist in an objective reality, we must weigh up the implications of a non-objective, subjective reality and what it means for our lives. We have a choice for our belief in what exists. How will you choose?

The author is retired with a Master of Science degree, having worked with digital projects during his final years of full-time work. After retirement, the author lectured in digital circuit theory at a technical and further education college for a number of years on a part-time basis. The inspiration to write this book has developed over most of the author’s lifetime, starting from a very young age, and retirement has provided the opportunity to further develop the concept of reality presented in this book.