Freddy the Firefly Shines His Light 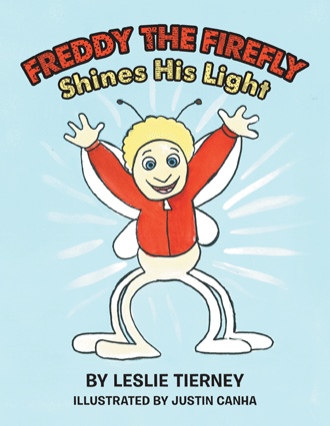 Freddy the Firefly lived in a cozy old tree house deep in the woods. He lived with mom and dad and his baby sister Gloria Glowworm. Freddy loved the tree house because it had many secret passageways for flying in and out. It also had a nice open porch so friends could easily drop by and invite Freddy to play.

Frankie, his best friend, often swooped down on the porch.

"Freddy, are you ready to play by the lake?"

"Mom, I've done my homework. May I go, please?" Freddy eagerly hovered in front of her.

"Yes, but you know the rules. When it's time for bed, I'll come out onto the porch and flash my light. That's your signal to fly home right away."

"Ok, mom," answered Freddy, as he and Frankie buzzed away.

How Freddy loved circling the lake with Frankie. They invented new games and performed cool dives and other acrobatic feats.

They glided over the lake and when they felt warm, they splashed down into the water for a dip. They played hide and seek in the trees and discovered new ways of flying. Sometimes they would launch themselves from a treetop and float down like a parachute.

For hours they glided, raced and soared. Freddy felt happy that he was created not only to fly, but to light up the world. It was a special power that only fireflies had.

Just when Freddy was having the best time ever, he spotted a familiar flash dance coming from the tree house.

Even though Freddy was far away, he recognized mom's flash pattern bright and clear. Every family had a special flash pattern to talk with one another. It was unmistakable. There it was again.

Mom stayed on the porch doing her flash dance. But instead of flying home like he usually did, Freddy ignored her. He pretended not to notice and kept right on frolicking in the dark night.

Freddy the Firefly lives in a comfortable, old tree house with his mom, dad, and his baby sister, Gloria Glowworm. Freddy’s best friend, Frankie, swoops by every night and invites Freddy to play by the lake. One night, Freddy decides to ignore his mom’s flash dance, which signals him it’s time to fly home. The next day, Freddy must deal with a series of unfortunate incidents at school and at home.

Freddy’s teacher, Mrs. Flutterby, has a sparkly personality with a special glow. She not only teaches her fireflies about science, but imparts valuable character lessons as well. Mrs. Flutterby encourages her fireflies to share their positive traits—their glow—with everyone they meet. Freddy finally takes this lesson to heart. The power of a simple, kind gesture to his friend, Fiona, creates a chain reaction that causes a magical glow in the classroom. Until one day, Mrs. Flutterby isn’t her usual sparkly self.

In Freddy the Firefly Shines His Light, by author Leslie Tierney and illustrator Justin Canha, children learn that, just like Freddy, they have a positive glow to share with the world and make it a better place.

A whimsical story that teaches children about consequences, outcomes and the joy of helping one another. This book is destined to become a favorite; children will revisit Freddy over and over again.

Freddy The Firefly Shines His Light is the delightful tale of how Freddy learns the gift of encouraging others. The story is beautifully written...the descriptive words and phrases make this story come to life. While the main point of the story is the lesson Freddy learns about kindness, the author also weaves in some interesting facts about fireflies. The character of Freddy is one with whom children will connect. The illustrations are bright and cheerful. Reading this story gave me a special glow! I look forward to reading this to my students and my seven year old son.

Freddy The Firefly Shines His Light is perfect for a school author visit or as part of a character education program. Young children ages four through nine will be captivated by Freddy the Firefly and learn valuable lessons as well.

Leslie Tierney is an author in the bestselling Chicken Soup for the Soul series. She works with young children as a dance teacher and in the classroom. A professional ballroom dance teacher, her hobbies include theater, hiking, and travelling with her husband, Joe. Tierney lives in Glen Ridge, New Jersey.

Justin Canha is a gifted illustrator who happens to be autistic. His artwork first appeared in the Ricco/Maresca gallery in New York City in 2005 as a teenager. Since then, Justin has been exhibited in many galleries, museums and universities throughout the United States. He has illustrated several books, such as Pedro's Whale and has been the subject of three documentaries. Justin resides in Montclair, New Jersey.